Then there will be great tribulation

Then there will be great tribulation

There is an initial sequence of events that leads up to the tribulation, but we should not suppose it stretches out over more than a century, or even over a few years. This fact is confirmed in Revelation with the opening of the symbolic scroll with the seven seals.

The opening of the second, third and fourth seals  unleashes the horsemen of war, famine and pestilence —in that order. That is the same ordering of events Jesus spoke about when he foretold: “Nation will rise against nation, and kingdom against kingdom. There will be great earthquakes, and in one place after another food shortages and pestilences; and there will be fearful sights and from heaven great signs.”

Not coincidently, when God brought judgment against Jerusalem by means of Babylon the same sequence of events are listed. Here are some examples:

“This is what Jehovah says: ‘Here I am putting before you the way of life and the way of death. Those who remain in this city will die by the sword, by famine, and by pestilence.’” —Jeremiah 21:8-9

“And I will send against them the sword, the famine, and the pestilence, until they have perished from the land that I gave to them and to their forefathers.” —Jeremiah 24:10

“Bring your necks under the yoke of the king of Babylon and serve him and his people, and you will keep living. Why should you and your people die by the sword, by famine, and by pestilence, as Jehovah has said about the nation that will not serve the king of Babylon?” —Jeremiah 27:12-14

“This is what Jehovah of armies says: ‘Here I am sending against them the sword, the famine, and the pestilence, and I will make them like rotten figs that are so bad they cannot be eaten.”’ —Jeremiah 29:17

“And I will pursue them with the sword, with famine, and with pestilence, and I will make them an object of horror to all the kingdoms of the earth, and a curse, and an object of astonishment, something to whistle at, and a reproach among all the nations to which I disperse them, because they have not listened to my words that I sent to them with my servants the prophets,’ declares Jehovah, ‘sending them again and again.” —Jeremiah 29:18-19

“Therefore this is what Jehovah the God of Israel says concerning this city that you are saying will be given into the hand of the king of Babylon by the sword, the famine, and the pestilence, ‘Here I will gather them together from all the lands where I dispersed them in my anger and in my wrath and in great indignation, and I will bring them back to this place and let them dwell in security. And they will be my people, and I will be their God.’” —Jeremiah 32:36-38

“Therefore this is what Jehovah says: ‘You have not obeyed me in proclaiming liberty, each one to his brother and to his fellow man. So I will now proclaim liberty to you,’ declares Jehovah, ‘to the sword, to pestilence, and to famine, and I will make you an object of horror to all the kingdoms of the earth.”’ —Jeremiah 34:17

“This is what the Sovereign Lord Jehovah says: ‘Clap your hands and stamp your foot and bemoan all the evil and detestable things done by the house of Israel, for they will fall by the sword, by famine, and by pestilence. The one far away will die by pestilence, the one nearby will fall by the sword, and whoever escapes these and is left remaining will die by famine; and I will fully unleash my wrath against them.”’ —Ezekiel 6:11-12

“They have blown the trumpet, and everyone is ready, but no one is going to the battle, because my wrath is against the whole multitude. The sword is outside, and the pestilence and the famine are inside. Whoever is in the field will die by the sword, and famine and pestilence will consume those in the city.” —Ezekiel 7:14-15

“For this is what the Sovereign Lord Jehovah says: ‘So it will be when I send my four punishments—sword, famine, vicious wild animal, and pestilence—against Jerusalem to cut off man and animal from it.”’ —Ezekiel 14:21

The sword of war, famine and disease that Jehovah brought upon Jerusalem and surrounding nations obviously induced a tribulation —a time of great distress.

But for us, the real issue is not the sequence of events, but whether or not the symbolic seven seals have already been unsealed. Since 1930 the Watchtower has taught that all the seals were unsealed in the 1914 period. In fact, up until about 1970 the Watchtower even taught that the great tribulation began during the First World War, but that God cut it short.

Nevertheless, even after that folly was amended the Revelation Grand Climax commentary, which was published in 1988, continued to teach that the seven seals were consecutively opened around 1914. That includes the sixth seal, which betokens earth-shaking, cataclysmic events, such as the sun and moon going dark and the stars falling from the heavens and every mountain and island being rocked from its foundation.

Since no such global calamity has occurred —even after the sixth seal was supposedly undone, laughably, the Watchtower has been compelled to claim that the world has been rocked over the course of the past century by preliminary temblors leading up to the Big One. Jehovah’s Witnesses have thus been led to believe that the opening of the symbolic seals of the scroll of Jehovah’s awe-inspiring judgments is anticlimactic.

In this year, 2018, the Watchtower continues to proclaim that Christ came in 1914 and WW1 and the Spanish Influenza were the visible result of his grand coming. Yet virtually no one alive today has been a witness to those events. That is a problem in view of the fact that Jesus said “when you see all these things.” The truth is, we have seen none of the things Jesus foretold.

The stark reality that must eventually confront Jehovah’s Witnesses is that war, famine and pestilence are the future; albeit, judging by the ominous developments in recent weeks, it is our immediate future. 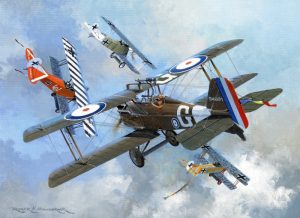 On the other hand, on March 1st Vladimir Putin unveiled Russia’s hypersonic missile that can streak across the heavens at over 5,000 mph and zoom into its target at treetop level, evading all missile defense systems. We are not talking about science fiction. This is real. Furthermore, Russia and China are developing weapons that can blast satellites out of the sky.

Consider also, killer robots are already in production.  Do you think that it might be a fearful sight to see a machine slaughtering people indiscriminately? Most ominous, the US, Russia and China are all racing to place nuclear weapons in the heavens —in space.

In short, the various features of the sign Christ foretold, such as war, famine and pestilence, occur immediately prior to the great tribulation. And the tribulation is obviously a direct result of the tumult of war —bringing down governments and long-standing, seemingly permanent institutions, basically crashing the system.

As regards food shortages, typically food shortages and famines occur as a result of crop failures and to a lesser extent, disruptions caused by war; but in the modern world of just-in-time delivery, food shortages could come about in a time of plenty if a single link in the distribution chain is broken. For example, a war in the Middle East could shut down the Straits of Hormuz, a strategic choke point through which passes tankers loaded with oil that supply half the world’s petroleum. No oil —no fuel for delivery trucks and farm equipment or raw material for fertilizer.

A global pandemic seems inevitable. Not only because more and more microbes are developing resistance to antibiotics —creating so-called “superbugs,” but fiendish men have developed bio-weapons that could easily be released in populated areas.

Happily, although we are facing world war and death and destruction on a scale never before experienced, and unprecedented persecution, Jesus exhorted us to lift ourselves up and take heart when we see all these things start to unfold. And most reassuring, however severe the world’s greatest time of trouble may be, God will cut it short on account of the chosen ones.

With the nuclear powers of this world now perilously one shot away from a global conflagration, isn’t it time for Jehovah’s Witnesses to reconsider the words of Jesus regarding the things that must shortly take place?