Who Should Partake of the Memorial Emblems?

Who Should Partake of the Memorial Emblems?

I am not claiming that all partakers are chosen to go to heaven. But not partaking isn’t scriptural, for a couple reasons. 1 Timothy 4:1-5. But if all food can be consumed, so can the emblems. And this scripture may be referring to the WT, as they are the only group of people who believe the Bible(falling away from the truth) that prevent others from eating food as a thanksgiving(emblems) and they also prevent marriage to those who are not JWs. I know I am not married at this moment because I was scared into believing that I would sin if I married out side the truth. It can’t be referring to Christendom either, as they never had the truth to fall away from nor do they restrain their members from eating any type of food or marrying. And we both know 1914 isn’t a teaching from Jehovah, so it can only come from another source. Perimeno sheds more light on the matter. He is also does not believe that the emblems are only for the anointed, but also for the other sheep. Rutherford is the source of the anointed being the sole partakers, we would both agree anything that man said should not be taken seriously.

1 Timothy 4:1-5 states: “However, the inspired word clearly says that in later times some will fall away from the faith, paying attention to misleading inspired statements and teachings of demons, by means of the hypocrisy of men who speak lies, whose conscience is seared as with a branding iron. They forbid marriage and command people to abstain from foods that God created to be partaken of with thanksgiving by those who have faith and accurately know the truth.”

First, the Lord’s Evening Meal is not really a meal in the sense that we understand the word “meal.” The bread and wine are not to be consumed the same as physical food and drink. In fact, Paul reproved the Corinthians who lacked appreciation for the sacredness of the occasion. Apparently, some of the Corinthians used the memorial as an ordinary meal, which is why Paul wrote: “When you come together in one place, it is not really to eat the Lord’s Evening Meal. For when you eat it, each one takes his own evening meal beforehand, so that one is hungry but another is intoxicated. Do you not have houses for eating and drinking? Or do you despise the congregation of God and make those who have nothing feel ashamed? What can I say to you? Should I commend you? In this I do not commend you.”

Paul’s inspired word regarding people falling away from the faith and giving heed to demonic expressions forbidding the consumption of certain foods and forbidding marriage could not possibly apply to the teachings of Jehovah’s Witnesses.

For one thing, it is evident that Paul is not speaking of the emblems of bread and wine because he refers to “foods,” plural —as in various kinds of food. This finds a fulfillment in the ancient Catholic/Orthodox traditions such as meatless Fridays and the fasting and dietary restrictions associated with Lent. For example, here is a link to an Orthodox website outlining the various practices.

As regards the practice of “forbidding marriage,” that too finds a remarkable fulfillment in the Catholic/Orthodox tradition of priestly celibacy. (While Orthodoxy does not impose celibacy on their priests the bishops are celibate.)

The apostolic injunction to “marry only in the Lord” is not forbidding marriage. It is forbidding marriage to an unbeliever. And that is the basis for the Watchtower to exhort Jehovah’s Witnesses to only marry Jehovah’s Witnesses. (Technically one could make the case that only anointed persons are “in the Lord,” that is to say in union with Christ.)

As for 1914 being a doctrine of demons, that much is true. However, it is not something associated with those who have fallen away from the faith. On the contrary, the “deluding influence” that God allows as “an operation of Satan” is directed against those who know the truth in order to test their love of the truth. As Paul indicated, the false announcements heralding the presence has begun and the day of Jehovah is here not only precede the actual manifestation of Christ, but are intended to deceive the brothers. That is why Paul counseled his brothers not to be quickly shaken from their reason or unduly alarmed by such proclamations. Clearly, Paul did not think that his brothers who would be subjected to the operation of error had fallen away from the faith.

In view of the fact that the Devil had already entered into Judas as he reclined at the Passover table with the other apostles when Jesus instituted the observance of his death by breaking the bread and saying “this means my body,” should we not expect the demons to take a special interest in the Evening Meal now? 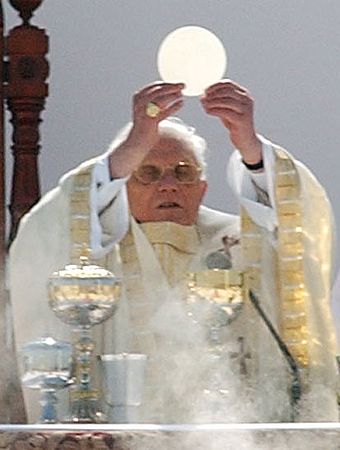 Indeed, since the sacredness of the Evening Meal has long been desecrated by the demons with their abominable Catholic mass, where the practice of feeding a wafer to the throngs of the ignorant and untaught is a daily ritual, the faint whisper of the original serpent is also detectable among Jehovah’s Witnesses: ‘Is it really so that Jehovah has said you must not eat or drink the emblems’?

Certain persons who pass themselves off as Bible experts would have you believe that the Watchtower is practicing a dark, satanic ritual by excluding everyone but the called ones from partaking of the emblems representing Jesus’ flesh and blood. But the fact is, the Evening Meal is a solemn ritual intended to be partaken of exclusively by those who are anointed. The supper signifies a communion with Christ and participation in the covenant between God and those who have been called into his Kingdom.

While the apostles were eating the passover lamb “Jesus took a loaf, and after saying a blessing, he broke it, and giving it to the disciples, he said: ‘Take, eat. This means my body.’ And taking a cup, he offered thanks and gave it to them, saying: ‘Drink out of it, all of you, for this means my ‘blood of the covenant,’ which is to be poured out in behalf of many for forgiveness of sins. But I say to you: I will by no means drink again any of this product of the vine until that day when I drink it new with you in the Kingdom of my Father.’”

In his saying the cup represented “my blood of the covenant” Jesus was referring to the so-called new covenant. Those in the new covenant are to be with Christ in heaven and will rule with him as kings and priests. That is what Jesus indicated in the 3rd chapter of Revelation, where he said to the seven congregations: “Look! I am standing at the door and knocking. If anyone hears my voice and opens the door, I will come into his house and take the evening meal with him and he with me. To the one who conquers I will grant to sit down with me on my throne, just as I conquered and sat down with my Father on his throne.”

Just as on the occasion when Jesus passed the cup of the “blood of the covenant,” he also said that his Father had made a covenant with him for a kingdom and he was making one with them, so that they might rule in his kingdom, in the passage above Jesus connects the sharers of the  evening meal with those who will sit down on his throne with him.

But what did Jesus mean when he said: “I will by no means drink again any of this product of the vine until that day when I drink it new with you in the Kingdom of my Father.”

The “blood of the covenant” represented by the red wine is intended to make it possible for God to declare sinless those who are party to the covenant, thereby opening the way for them to enter into the marriage of the Lamb. Their being declared sinless is more than just being forgiven. They are considered perfect. So, that is why Jesus said he would not drink wine again until he drinks it with them in the Kingdom. Here is what is stated in the 19th chapter of Revelation: “Let us rejoice and be overjoyed and give him glory, because the marriage of the Lamb has arrived and his wife has prepared herself. Yes, it has been granted to her to be clothed with bright, clean, fine linen—for the fine linen stands for the righteous acts of the holy ones.” And he tells me, “Write: Happy are those invited to the evening meal of the Lamb’s marriage.” Also, he tells me: “These are the true sayings of God.””

Notice, please, that the marriage of the Lamb is an exclusive, invitation only affair and those participating in the event are said to be “invited to the evening meal.” So, that is when Jesus will drink the wine of exaltation with them then, when Jehovah’s purpose to create a Kingdom of Christ and 144,000 is complete and goes into operation. That will indeed be a time of great joy.

As for Rutherford, he was right on a lot of things. He discerned that those whom he identified as the great crowd are a different group than the wife of the Lamb. Those who are said to come out of the great tribulation wash their robes in the blood of the Lamb, meaning they have forgiveness, but they are not direct parties to the new covenant and therefore should not drink from the cup of the “blood of the covenant.”

And to be sure, the new covenant and the ransom are not the same thing. All mankind will benefit from the ransom. But the new covenant is between God and a group whom Jesus addressed as a “little flock.” How do we know? Because Jesus said: “Have no fear, little flock, for your Father has approved of giving you the Kingdom.” Again, the little flock are the ones called into the Kingdom who share the Evening Meal with Christ.