The Wise and Foolish Virgins

The Wise and Foolish Virgins

QUESTION: Since the Watchtower has not given a new explanation to the parable of the virgins and the talents in Matthew 25, can you please explain it to me? Especially the part that says: ”The foolish said to the discreet, ‘Give us some of your oil, because our lamps are about to go out.’   The discreet answered, saying: ‘Perhaps there may not be enough for both us and you. Go instead to those who sell it, and buy some for yourselves.’   While they were going off to buy it, the bridegroom came. The virgins who were ready went in with him to the marriage feast and the door was shut. ” Where are the foolish ones going? What does the oil represent? There are two comings mentioned here? Because it says: ”Right in the middle of the night there was a shout: ‘Here is the bridegroom! Go out to meet him.’” And then the virgins react, and after that it says: ”While they were going off to buy it, the bridegroom came.” Please explain.

ANSWER: The Watchtower last commented on the parable of the wise and foolish virgins in the September 15th, 2012 Watchtower, ironically entitled: “You Know Neither the Day Nor the Hour.” It is ironical because while the intent of the article is to urge Jehovah’s Witnesses to remain in expectation of the execution of Jehovah’s judgments, and yet, contradictorily, the Society claims that the bridegroom arrived back in 1919. Amazingly, apparently Jehovah’s Witnesses believe it!

The contradiction becomes quite apparent though if we but read the parable in context. To be sure, the Watchtower’s explanation of the wise and foolish virgins now even contradicts its own exegesis! How so? Just one month after the above-cited Watchtower was published, at the Watchtower Society’s 2012 Annual Meeting the Governing Body announced that they were revising their previously held view that the master had already appointed the faithful slave over all of his belongings. It is to occur in the future.

But now let us consider the context – keeping in mind that originally the Bible was not written with chapters and verses.

“Who really is the faithful and discreet slave whom his master appointed over his domestics, to give them their food at the proper time? Happy is that slave if his master on coming finds him doing so! Truly I say to you, he will appoint him over all his belongings. But if ever that evil slave says in his heart, ‘My master is delaying,’ and he starts to beat his fellow slaves and to eat and drink with the confirmed drunkards, the master of that slave will come on a day that he does not expect and in an hour that he does not know, and he will punish him with the greatest severity and will assign him his place with the hypocrites. There is where his weeping and the gnashing of his teeth will be.

Then the Kingdom of the heavens may be likened to ten virgins who took their lamps and went out to meet the bridegroom. Five of them were foolish, and five were discreet. For the foolish took their lamps but took no oil with them, whereas the discreet took oil in their flasks along with their lamps. While the bridegroom was delaying, they all became drowsy and fell asleep. Right in the middle of the night there was a shout: ‘Here is the bridegroom! Go out to meet him.’ Then all those virgins got up and put their lamps in order. The foolish said to the discreet, ‘Give us some of your oil, because our lamps are about to go out.’ The discreet answered, saying: ‘Perhaps there may not be enough for both us and you. Go instead to those who sell it, and buy some for yourselves.’ While they were going off to buy it, the bridegroom came. The virgins who were ready went in with him to the marriage feast, and the door was shut. Afterward, the rest of the virgins also came, saying, ‘Sir, Sir, open to us!’ In answer he said, ‘I tell you the truth, I do not know you.’

Keep on the watch, therefore, because you know neither the day nor the hour.”

Please note that the two parables were spoken at the same time. And although I did not paste the entire context of it it should be noted that Jesus both prefaced and concluded the two illustrations of the wise and foolish servants by warning his disciples to stay on the watch because they do not know the day or hour of his return. Now, please note that I placed a line under a little four-letter conjunction – “Then.”  Brief grammar lesson: A conjunction joins together two causes or ideas.

The question is: When is “then”? Obviously, the Kingdom of the heavens is like ten virgins going out to meet the bridegroom when Christ comes to call his slaves to account.

That being the case, how is it that Christ is coming at an hour we do not know in the future in order to judge the slaves whom he appointed to feed his domestics – even as the Watchtower now recognizes – and yet, the bridegroom already came in 1919? Even more absurd, according to the Watchtower the door to the marriage feast has already been closed shut, this in spite of the fact that virtually every anointed person now living was anointed after 1919! Who among Jehovah’s Witnesses would be so unreasonable as to deny these glaring contradictions? 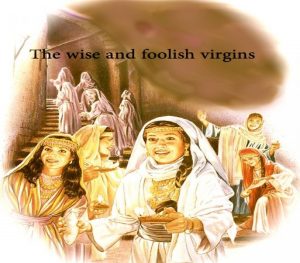 Why is it the Watchtower just can’t seem to get it right? There is a very good reason and it even ties into the future outworking of the illustration of the wise and foolish virgins. The reason the Watchtower routinely publishes nonsensical claptrap, such as the September 15, 2012 article, is because God has allowed Satan to impose “a deluding influence” upon everyone who otherwise knows the truth. And as I have written about rather extensively, the “deluding influence” (formerly called “an operation of error”) is intended to convince the prospective heirs of the kingdom that the parousia has already begun, which is exactly what the Watchtower Society has done with Jehovah’s Witnesses.

Because Jehovah’s Witnesses are laboring under the delusion that Christ has already come as the messenger of the covenant and as the bridegroom – for that very reason the authentic coming of Christ will be just like the unexpected arrival of a thief in the night, at an hour none think likely.

Now, as regards the meaning of the story, the oil represents the knowledge and spirit we have.  In the illustration of the two slaves assigned to feed the domestics “their food at the proper time” represents the same thing – knowledge and instructions. But what happens to that feeding program when the master unexpectedly arrives and finds that all is not as it should be? Although it is unsaid, likely there would be a disruption of the feeding program itself, or rather – a cessation of it altogether. Especially might that be expected when the negligent slave is put out of the kitchen! (Similarly, Paul indicated that the Evening meal – the memorial of Christ – will only be observed until he arrives, at which point it will cease.)

It was in the next breath that Jesus spoke of the wise and foolish virgins.  The call in the night – “Here is the bridegroom! Go out to meet him” – will be when Jesus arrives unexpectedly and the parousia begins. At that point the Watchtower will have served its purpose, as far as preparing a people to receive Christ. It will then have nothing left to offer – except for those foolish virgins who at that critical moment go to it to purchase more oil. (“Remember the wife of Lot.”) In their case the “deluding influence” will reveal that they did not accept the love of the truth.

The wise virgins with enough oil in their lamps will not look to the oil merchants then (the Watchtower), but will have the spirit in them to guide them through the dark to Christ. The bridegroom’s coming while the foolish virgins are off trying to buy more oil will coincide with many being stumbled and deceived by the false christs then, while the far-sighted eagles are gathered to the carcass.

So, the parousia will unfold over a relatively short period of time, beginning with the announcement – “Here is the bridegroom”! And ending when the wise virgins are received into the wedding feast and the door is closed – coinciding with the sealing of the chosen ones and the completion of the Kingdom of the heavens. At which point all 144,000 will have been chosen and approved and the door to heaven shut.