Will USA collapse slow or fast?

Will USA collapse slow or fast?

QUESTION: There’s theories out there that suggest a monetary reset having to do with the BRIC nations and SDR’s coming soon. As your well aware, nations have already started to drop the USD as a reserve currency . Some economists are saying this could take place in ’15 or ’16 or soon there after.

I know you imply that the US will suddenly crash as like Babylon did, but I’m wondering if the International bankers will try to crash it slowly with a drop in the value of the Dollar similar to the Ruble, so as not to cause WW3 immediately. This seems to be the likely course to me. Where does the “pushing and shoving” start in all of this?

ANSWER: I don’t think the Dollar can be taken down slowly. There is simply too much debt and too many petro-dollar-based contracts in the form of derivatives, such as currency swaps and interest rate swaps and the like. At this point in time there is supposedly $1.7 quadrillion in derivatives and the market is increasing exponentially. It has to.

Given the astronomically, gargantuan size of the so-called derivatives market there is absolutely no way it can be unwound in a slow, orderly fashion. It must increase or collapse. And that is really the only two possibilities. That is why even as some nations are moving away from the U$ it is still considered a safe haven. That is because the central banks have been printing money like crazy and the banks that get free money are rigging the markets, including the currency markets, to keep the Dollar and Euro buoyed up. But it can’t go on indefinitely.

The collapse of the price of oil is a potential debt-o-nator. Most oil producers have bought forward contracts – derivatives – that have locked in the price of the oil they sell in the future. Those contracts guarantee the producers’ sale prices up around $100 per barrel. With spot prices now about half that the too-big-to-fail banks that sold those contracts are on the hook for the difference. Assuming all producers have forward contracts we are talking close to 100 million barrels of oil per day, amounting to trillions of dollars the banks will have to cough up. Of course, the contracts play out over months or even years, but if the price of oil stays below $100 for an extended period of time, then the big banks will blow out, no doubt. Some analysts are even saying the price of oil is going to go much lower, possibly down to $30, some even say $20 is possible. But ultimately, it is not the banks that are in trouble. They have got it set up so the government and the taxpayers are going to have to cover their busted gambling bets. 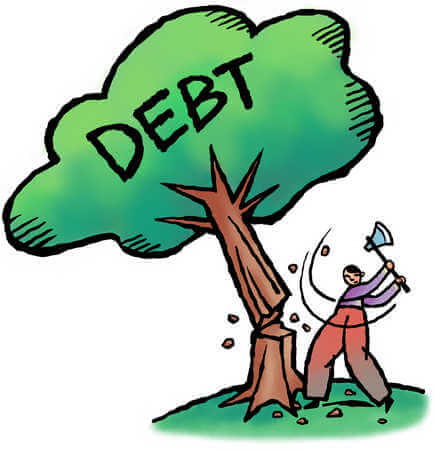 As far as the sudden crash of the Anglo-American Empire, though, my view is not based upon the present situation, but rather, upon prophecy. Current realities merely confirm that conditions are ripe for what is projected to occur in God’s prophetic word.

Take the case of ancient Egypt. As you may or may not know, Egypt foreshadows America.  And in the prophecy of Ezekiel the nation of Egypt was likened to a giant cedar tree that is cut down by the tyrants of the nations. Its sudden fall stuns the world. As you can imagine, once the base of a massive tree has been sawn or chopped through to a certain point its fall is not only inevitable, but swift. In other words, you can’t fell a tree gradually. That is obviously what is being illustrated in prophecy.

As far as the “pushing,” I don’t know if they are at that point yet. It seems as if they may be, but that would signify that the time of the end has begun. That is too much for me to comprehend. What can be said with certainty, though, is that we are close to the zero hour.

War is London/Wall Street’s only option  – Just how Bad Is It?