What about the Governing Body?

What about the Governing Body?

Answer: The Governing Body in its present form is a relatively new institution dating back to 1971. Up until then the Watchtower Society was run by a president and a board of directors. However, since the year 2000 no member of the Governing Body sits on the board.

While the Governing Body determines what is taught and published the board of directors exerts control over the activities of the organization; for example, its policies, say, towards pedophiles and their many victims; buying and selling properties; construction projects, investments and the like. Although the Governing Body insists that it still oversees all matters related to the publishing company, legally they have no claim to such authority since not one member sits on the corporation’s board. 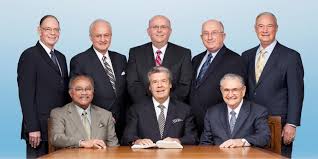 However, the concept of a governing body goes back to the original apostles. They along with an unnumbered group of older men formed a governing counsel that determined correct doctrine and issued directives that were distributed to all the congregations, such as when they discussed the circumcision issue and circulated a paper explaining their decision.

However, there are notable differences too. Most notably, the first century apostles did not dictate every detail of what was to be taught. Unlike congregations of Jehovah’s Witnesses today, each congregation back then had a much greater degree of autonomy.

But as regards the source of truth, even though the apostles are no longer alive their written words are still the final authority in congregational matters. Interestingly, in his discussion of the coming man of lawlessness, Paul cautioned the Thessalonians not to be alarmed regarding reports of the coming of Christ, even if they hear “inspired” proclamations or receive letters that purport to be from the apostles.

So, according to the prophecy Paul recorded there will be those who assume the authority of the apostles and they will proclaim that the day of Jehovah is here as a prelude to the actual event. This has been the message of the Watchtower for over 100 years – longer really, since from its inception in 1878 the Watchtower has proclaimed that the parousia has begun.

Still, as I have pointed out in numerous articles, God allows for a deluding influence to exist prior to the actual coming of Christ in order to serve as a test of our love of the truth. So, in a sense the deluding influence comes from God, since he allows it and it serves his purpose.

While some of Jehovah’s Witnesses may debate the scriptural validity of the institution of the Governing Body, it is worth noting that the Pharisees were not part of the Israelite organization that God instituted. They only sprang up sometime after the Israelites returned to Palestine from Babylon/Persia. Essentially, they were a manmade institution. Nevertheless, when Jesus was on the earth he told his disciples to do whatever the Pharisees told them to do, only not to practice the hypocrisy that the Pharisees practiced.

Of course, the disciples were not under the authority of the Pharisees for long. After the day of Pentecost they outwardly defied the Jewish authorities who tried to prevent them from preaching.

So, as regards the Governing Body, they are directing the preaching work and overseeing the publication of Bibles and explanatory material in hundreds of languages. That is something. But it is only a phase we are going through. They are merely presiding over Jehovah’s sheep temporarily. There is a final phase during the time of the end. The Governing Body, as such, will not factor into that – individuals presently on the body may, but not the institution itself and certainly not the corporation.

As for the worshipful attitude of many of Jehovah’s Witnesses toward the Governing Body and faithful slave, that is more a defect inherent in humans as a whole. Didn’t some of the Corinthians claim to belong to Paul, others to Apollos, etc.? And there is a demonic element too. Remember when Paul and Barnabas healed a man in Lystra the Greeks hailed them as gods. The priest of Zeus came out and attempted to make a religious sacrifice to them.

Back in the beginning of the Watchtower Society a cult of personality developed around Charles Taze Russell. After his unexpected death quite a few Bible Students refused to continue in association under Judge Rutherford. In fact, to this day there as a few thousand Bible Students in various groups that still follow C.T. Russell.

But idolatry can be more subtle. And in this the Watchtower is not guilt free.

Whereas, Paul and Barnabas directly addressed the issue regarding certain Corinthians claiming to belong to them instead of Christ, the Watchtower has never uttered one word of caution about attaching too much importance to the organization or the Governing Body or faithful slave. Just the opposite in fact. They routinely elevate themselves and the organization. For example, the most egregious instance of putting the Watchtower in the place of God and Christ is the fact that anyone who undergoes baptism has to publicly declare that they recognize that they are also followers of God’s spirit-directed organization.

Because certain men have seated themselves in the seat of Christ it is apparent that Jehovah’s Witnesses are in a similar position as the disciples relative to the scribes and Pharisees. We should, therefore, not suppose that Jesus’ counsel is any less applicable now: “The scribes and the Pharisees have seated themselves in the seat of Moses. Therefore all the things they tell you, do and observe, but do not do according to their deeds, for they say but do not perform.”