Psalms #16 – You will not leave me in the grave

Psalms #16 – You will not leave me in the grave

When Adam took the forbidden fruit from Eve’s hand it was impossible for him to even imagine the catastrophe his rebellion against God set into motion. Now, some six thousand years removed from Eden it seems like paradise is an unrealistic pipe dream, and life in this 21st century is rapidly devolving into a nightmare.

As we know the real rebel was not human but was an ambitious angel who became the first liar. His vast web of lies now enshrouds the world. He may have originally imagined that his scheme to oppose God was successful. After all, if God let Adam and Eve off the hook, so to speak, so they could fulfill God’s commission to them to fill the earth and subdue it, then God would be proven to be a liar since he told Adam “you will positively die.” And if God puts Adam and Eve to death and starts over with two new humans then he will violate his own self-imposed “sabbath.” And if God just lets Adam and Eve fill the earth with their dying offspring God will have failed to accomplish what he had intended.

Did the crafty cherub maneuver God into an embarrassing predicament? Not even for a moment.

On the very day Adam and Eve sinned God announced an inscrutable riddle as His far-reaching solution to the new circumstance. The offspring of the woman will crush the head of the serpent. Say what?

For thousands of years it was impossible to understand Jehovah’s enigmatic prophecy. Then Jesus appeared. From all appearances, Jesus was an ordinary human. He was born into a poor Jewish family and grew up practicing the customs of the Jews. He was a carpenter. But when we was 30 years old he was anointed and began preaching a new message. Jesus revealed that he had actually come down from heaven. Yes, his mother was a Jewish virgin, but his father was not human. Jehovah was Jesus’ real Father.

Prior to Jesus, there were numerous occasions when angels materialized. In fact, when Jesus was born in a cattle stall in Bethlehem angels appeared to some shepherds to announce the birth of the son of God. Although he lived in heaven prior to his birth Jesus was no materialized angel. He was fully human. And because God transferred the life of His perfect heavenly offspring—encoding his life force into genetic material and implanting it in the womb of a human mother—Jehovah God was able to conceive a perfect man from an otherwise imperfect human mother.

But why? Materialized angels are not humans. They may look human when they become incarnate but they are not. Paul explained that man is a little lower than angels, which is to say that angels are higher than humans—obviously, vastly superior in terms of power and experience. The difference between spirit and flesh was demonstrated in the case of the many angels who forsook their own

proper dwelling place in heaven and cloaked themselves in flesh to procreate with beautiful women before the Flood. Their offspring were hybrid freaks—part human and part angel and totally evil.

In order not to violate His own sabbath, Jehovah transferred the life of an already existing creature made in his image into human form. Yes, Jesus is a creature, the very first creature God created. That is why he is called the Firstborn of all creation and the beginning of God’s never-ending creation. But why did this heavenly creature become earthly? So that the second perfect man could offer the value of his life to replace what Adam threw away—not for Adam’s sake, but for his offspring who had no say in the matter. The value of Christ’s sacrifice could justify God redeeming all of Adam’s sinful offspring from death. Ultimately their redemption will result in their attaining human perfection so that God’s purpose will be accomplished. When God’s great sabbath is over and the earth is a paradise teeming with perfect humans all happily worshipping their God and Savior it will be as though the Devil never even existed; except, his disgrace will always be remembered.

Because he was entirely human Jesus could not simply dematerialize and return to heaven. This required another miracle, which came in the form of Jesus being begotten to become a spirit son. Yes, Jesus was born again when the holy spirit came upon him.

But in order to be fully reborn, and to pay the ransom, Jesus had to die. That was the only way for him to get back home to his Father. And he could not simply die in his sleep or from natural causes. Jesus was perfect. Sinless. He never was ill. He would have never died a natural death. Further, it was God’s will to subject his son to the most excruciating, torturous death imaginable—to be nailed to a tree! But why? Because the Devil claimed that no man would be willing to suffer for God, much less give his life.

Jesus had to trust God to revive him and bring him back to life as a spirit. Hence, the words of David that the inspired apostles ascribed to Jesus: “For you will not leave me in the Grave. You will not allow your loyal one to see the pit. You make known to me the path of life. In your presence is abundant joy; there is happiness at your right hand forever.” — Psalms 16:10-11

As Michael, before he came to earth, Jesus was the foremost prince of Jehovah’s angelic army who led the Israelites. Most likely Michael was directly involved in inspiring David to compose the messianic Psalms. The son knew that being in God’s presence was the ultimate experience. He knew the joy of being at God’s right hand even before he was resurrected. Through David, the prehuman Jesus spoke of his relationship with God. In view of the fact that Jesus bears the title of the Word, it would not be improper to say that David channeled Christ in the Psalms that have become part of the word of God. 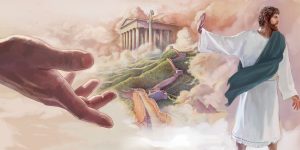 Anticipating his encounter with Satan in the wilderness when the demonic overlord offered him all the kingdoms on earth if he would only perform a single act of worship, at Psalms 16:4 Jesus states: “Those who pursue other gods multiply their sorrows. I will never pour out their drink offerings of blood, nor will my lips mention their names. Jehovah is my portion, my allotted share, and my cup. You safeguard my inheritance.”

The same spirit moved Jesus to say to his Tempter: “Go away, Satan! For it is written: ‘It is Jehovah your God you must worship, and it is to him alone you must render sacred service.” After Satan departed angels began ministering to Jesus. Jehovah safeguarded his inheritance.

Jesus claimed to be the way, the truth, and the life—the only way to God. He was not being immodest. He was simply stating a fact. Jesus knows the way to God because he was forced to find his way through all the temptations and obstacles with which he was confronted. He had to trust God. That is why following Jesus’ teaching and example will lead us to God.

On the night of his arrest, Jesus told his disciples “take courage! I have conquered the world.” Indeed, he did!