Was Jesus really conversing with Moses and Elijah in the Transfiguration?

Was Jesus really conversing with Moses and Elijah in the Transfiguration?

QUESTION: In the Transfiguration, how can it be that Jesus is conversing with Moses and Elijah? Is it a vision? Or is it symbolic of something? If so, please explain how that’s the case. I was having a debate about how no one can have ascended to heaven and I had this pulled on me. Granted, they were on a mountain and not in heaven, but still they were alive and conversing, which is again contrary to my understanding of those faithful men that died before Christ to be asleep in death in Sheol or Hades awaiting a resurrection.

ANSWER: The answer is, it is both. It was a vision and it is symbolic of something.

The context of Matthew the 17th chapter itself reveals it was a vision, as Jesus stated to Peter, James and John: “As they were descending from the mountain, Jesus commanded them: ‘Tell the vision to no one until the Son of man is raised up from the dead.”’

According to Jesus it was a vision. But what was the purpose of it? What did it signify? Years later Peter wrote about the Transfiguration, saying: “No, it was not by following artfully contrived false stories that we made known to you the power and presence of our Lord Jesus Christ, but rather, we were eyewitnesses of his magnificence. For he received from God the Father honor and glory when words such as these were conveyed to him by the magnificent glory: ‘This is my Son, my beloved, whom I myself have approved.’ Yes, these words we heard coming from heaven while we were with him in the holy mountain.” 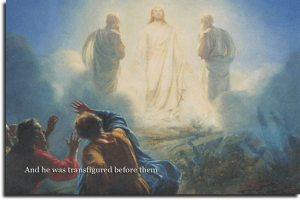 Notice, please, Peter indicated that the supernatural transformation was a foregleam of the power and presence of Jesus Christ. That is verified by the fact that Jesus’ appearance was not unlike the way he appeared to John in the vision of Revelation. And contrary to the Watchtower’s artfully contrived invisible presence, Peter underscored the fact that he, John and James, had been eyewitnesses to the magnificent appearance.

To demonstrate the falsity of the Watchtower’s 1914 invisible parousia consider the very next passage in context: “So we have the prophetic word made more sure, and you are doing well in paying attention to it as to a lamp shining in a dark place (until day dawns and a daystar rises) in your hearts. For you know this first, that no prophecy of Scripture springs from any private interpretation. For prophecy was at no time brought by man’s will, but men spoke from God as they were moved by holy spirit.”

Peter is here stating that the Transfiguration was a seal, or a guarantee of the fulfillment of the prophetic word regarding the coming of Christ in his kingdom, and it is intended to serve as a lamp until day dawns – obviously, the day of the Lord. The daystar rising in your heart is in reference to the chosen ones who survive to the parousia being received into the kingdom, at which point they will shine as brightly as the sun in the kingdom, as was portrayed by Moses and Elijah in the vision.

Not coincidently, in the very next span of verse Peter foretells Christians will be infiltrated by false prophets who will exploit you with counterfeit words. “Invisible parousia” certainly fits the criteria of a counterfeit, quasi-biblical expression.

There are a few articles on this site, which go into the significance of Moses and Elijah in the vision.