His feet will stand on the Mount of Olives

His feet will stand on the Mount of Olives

This is a continuation of a series of questions for Jehovah’s Witnesses.

QUESTION #28 – If Jehovah is a spirit who only lives in heaven and who cannot ever be seen, how is it possible for him to reside in Jerusalem later (Zechariah 2:10-11)?

It is not a question of “if” Jehovah is a spirit. Of course he is. Only the most ignorant and untaught person would suppose otherwise. In a conversation with a Samaritan woman Jesus stated very plainly: “God is a Spirit, and those worshipping him must worship with spirit and truth.” —John 4:24

Furthermore, in his introductory remarks to the gospel bearing his name, the apostle John wrote: “No man has seen God at any time; the only-begotten god who is at the Father’s side is the one who has explained Him.”

Pretty simple. The problem is, at least for them, trinitarians refuse to believe the Bible. Not only do they not understand the simple and straightforward truth, but they take symbolism literally. That is because they have no regard for truth and apparently are even lacking in basic intelligence.

Take for example the account of God’s dealings with the first man. The Genesis record states that God strolled around in the garden about the breezy part of the day and Adam and Eve went into hiding away from the face of Jehovah. Now, the unintelligent person will probably suppose that Adam and Eve could literally see Jehovah, otherwise why does it say that they hid from his face? But, of course, the inspired apostle clearly stated that no man has seen God at any time. And the truth does not contradict itself. So, we can rule out any sort of literal appearance.

Obviously God was not visibly present in Eden. And it should be equally obvious —at least to intelligent persons —that when the Scriptures speak of God being in the midst of his people it is in a spiritual sense —the same as it was in the beginning before Adam and Eve ruined their relationship with God.

QUESTION #29 – If Jehovah is a spirit who only lives in heaven and who cannot ever be seen, how is it possible for him to stand on the Mount of Olives later (Zechariah 14:3-4)?

It is amusing that the questioner considers this a “JW lie.” Perhaps the most appropriate question to pose to them is, if God is a Rock how is it possible for him to move around?

It is beyond the grasp of a trinitarian that Jesus has been given authority by his Father —that Jesus acts in behalf of Jehovah. Yet, over and over again Jesus said that very thing. As stated already, a trinitarian simply does not believe in God. They claim they do, but they really don’t. Perhaps to avoid the stigma of being labeled as a godless atheist they claim belief in the most nonsensical thing imaginable —That the Father and the Son have no father/son relationship. 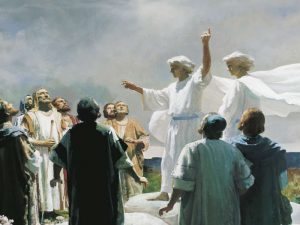 The Mount of Olives is where Jesus spoke to his disciples about his return and the end of this wicked world. Then 40 days after his resurrection from the dead Jesus met with his followers one last time. And after giving them final instructions to wait in Jerusalem for the spirit Jesus was levitated skyward and taken from their view. And at that very moment two angels stood in their midst and said: “Men of Galilee, why do you stand looking into the sky? This Jesus who was taken up from you into the sky will come in the same manner as you have seen him going into the sky.” – Acts 1

Ever since Jesus was taken up his followers have been waiting for his return. But is he literally coming back to the geographical spot in the Middle East where he stood some-2,000 years ago? Naturally, persons who have no understanding of anything would assume so.

But persons who have been enlightened know that the modern city of Jerusalem in the state of Israel has nothing whatsoever to do with the fulfillment of Bible prophecy. The “Jerusalem” over which God is destined to fight has to do with the Kingdom. Jerusalem is merely a symbol. It symbolizes Jehovah’s Kingdom, since the kingdom of David was originally established with its headquarters in Jerusalem. And as a descendent and heir of David’s throne Jesus also came to Jerusalem, where he was hailed as the King of Israel. And the original 120 disciples were anointed in an upper room in the city of Jerusalem.

Jerusalem is a fitting symbol for the established Kingdom, when all of the remaining members of the Kingdom are finally chosen and sealed. That is when the nations are drawn into fighting against God. At that point Christ is said to come down and stand upon the Mount of Olives. It is not, however, a literal location, but rather a situation. That is when all the enemies of Jehovah and Christ will be slaughtered, as verse 12 goes on to relate: “And this is the scourge with which Jehovah will scourge all the peoples who wage war against Jerusalem: Their flesh will rot away while they stand on their feet, their eyes will rot away in their sockets, and their tongues will rot away in their mouths.”