How many Jehovahs are there?

How many Jehovahs are there?

Question #51: How do you explain the 2 Jehovahs stated in Genesis 19:24? This was removed from your 2013 Bible, but is in prior versions. Jehovah made it rain sulfur and fire from Jehovah. Which means there are 2 Jehovahs. By reading the previous context this can be proven too. For example, Jehovah was physically standing before Abraham in Genesis 18:22. So the Jehovah that was on Earth called down fire from the Jehovah in heaven.

For a person who touts his expertise in exposing “JW lies” the questioner is astonishingly ignorant and frankly, untruthful. First, the newly revised NWT did not remove anything in that verse. The purpose of an honest translator is to add clarity to the text, which is what they did.

Keeping in mind that the events recorded in the Bible book of Genesis took place hundreds of years before Moses even undertook to put them in writing, customs, expressions and idioms were very different four thousand years ago, even changing over the course of time from, say, Abraham to Moses; so, it should not seem out of the way that the literal expressions in Hebrew may seem awkward to the modern reader.

It certainly is an odd argument for a Jehovah-hating trinitarian to make, though, that there are two Jehovahs, since apparently one Jehovah is more than they can stomach. But evidently two Jehovahs are acceptable for the reason that it is a lie and any lie is preferable to the trinitarian than the simple truth that Jehovah is God.

As for the cornball idea that there are two Jehovahs, Jehovah must have anticipated this sort of foolishness when he declared to Moses: “Listen, O Israel: Jehovah our God is one Jehovah.”

As for Genesis 19:24, here is the way the 2013 NWT renders it: “The sun had risen over the land when Lot arrived at Zoar. Then Jehovah made it rain sulfur and fire on Sodom and Gomorrah—it came from Jehovah, from the heavens.”

Whatever ambiguity the trinitarian wishes to inject into the passage to twist the Scriptures into supporting the cockamamie idea that there are two Jehovahs —one “Jehovah” apparently being Jesus (no mention of Jehovah #3 lurking about as the Holy Ghost) —the 2013 NWT makes it clear that the appearance of the name of Jehovah twice in the same verse does not constitute two individuals named Jehovah. The passage merely underscores that the fire was generated in the spirit realm and it came down from Jehovah in heaven —as opposed to a natural phenomena such as multiple lightning strikes or something of that nature.

It should be recognized that this was an extraordinary destruction. God could have caused an earthquake or brought in a violent windstorm. But he didn’t. It should have been clear to any who witnessed the event that the destruction of the two iniquitous cities was the work of God, which is why Moses emphasized the fact that the fire and sulphur “came from Jehovah, from the heavens.”

As for the absurd suggestion that one “Jehovah” was on the earth and another “Jehovah” was in heaven, the questioner obviously refuses to accept Jehovah’s own declaration that no man can see his face and live. Perhaps the questioner lacks the reasoning ability to sort it out? Whatever. But based upon the simple truth that no man has seen God nor can a human directly look upon the glorious Creator of the universe without being vaporized, we may categorically rule out the suggestion that the “man” called “Jehovah” was Jehovah himself.

Why is he called “Jehovah” then? The three “men” who came to Abraham were materialized angels. That the three “men” were angels is evident from the fact that the two “men” who went down to Sodom, to retrieve Lot and his family, are specifically identified as angels. The other “man” stayed behind with Abraham and answered his questions concerning the rightness of God’s judgments and the extent of his mercy. Because that angel spoke in behalf of Jehovah the angel is called “Jehovah.” 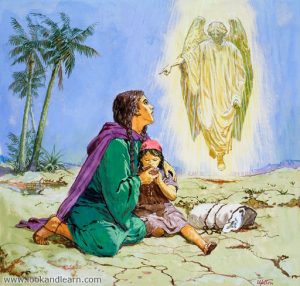 This was not the first time an angel spoke in behalf of Jehovah. A few years before an angel appeared to Abraham’s runaway concubine and spoke to her God’s message. But the account states of Hagar: “Then she called on the name of Jehovah, who was speaking to her.” Whereas the account clearly states that an angel visited Hagar, it also says Jehovah spoke to her. Reasonable and intelligent people realize that the angel simply spoke for Jehovah.

Some may wonder, though, why the angel took God’s name to himself or why he was allowed to by the Bearer of that name. Here are a couple of things to consider. First, as already stated, angels are God’s messengers. That is what angel means —messenger. In other words faithful angels speak for God. Secondly, given the fact that wicked angels promote the worship of holy angels, God’s angels are reluctant to reveal their personal names. The tendency to unduly honor or even worship angels simply because they are superior to humans was demonstrated by Manoah, Sampson’s father. Consider the account, which says: “Then Manoah said to Jehovah’s angel: ‘What is your name, so that we may honor you when your word comes true?’ However, Jehovah’s angel said to him: ‘Why are you asking about my name, seeing that it is a wonderful one?’”

The angel that materialized to Manoah and his wife did not appear as a normal human. Manoah’s wife, who first encountered the messenger, described him to her husband as “awe-inspiring.” Evidently that was not the case with the materialized messengers who visited Abraham. They evidently appeared as fully human. In any case, note Manoah’s tendency to want to honor the messenger was the reason the angel did not reveal his wonderful name. To underscore the reason the angel spoke in anonymity, there are only two instances in the Bible where angels personal names are revealed –one being Michael, the archangel, the other angel being Gabriel, who stands near to God. But look how Catholics have turned Gabriel into an object of reverence. Given the fact that the demons promote the worship of anything and everything other than Jehovah, it should now be obvious why the angel that appeared to Abraham was allowed to simply be described as “Jehovah.” Not only did he speak for Jehovah, but using God’s name was simply another way of saying: Why should you ask about my name?

Of course, because there is not a shred of support in the Bible for the three-in-one-god the trinitarians worship, they are compelled to fabricate trinitys from thin air —as is the case with this two Jehovahs nonsense.

Some of these questions are just stupid, but for the sake of offering an answer to whoever demands it, no matter how unreasonable they may be, the scripture relates two different roles and titles that Jehovah assigns to himself. Jehovah is the King of Israel and Jehovah is also the Repurchaser of Israel. There are not two Gods called “Jehovah.” There are merely two aspects of Jehovah’s relationship with his servant, Israel.

Jehovah simply refers to himself in the third person, referring to the past when God overthrew Sodom and Gomorrah. Again, there are not two Gods, just one God who uses various tenses of speech.