It will crush all these kingdoms

It will crush all these kingdoms

QUESTION: Is the stone hitting the feet/toes of the Daniel image the equivalent / same as Armageddon, or, the start of the “great tribulation? And does the not mixing of the iron and clay indicate that not all peoples will support the “eighth king” / world order dictatorship with the kind of order/unity that Hitler once achieved in Germany?

As we know, the stone not made with human hands represents the Kingdom. And the Kingdom of Christ will destroy all human governments at the battle of Armageddon. The 19th chapter of Revelation the apostle John describes that event this way: “And I saw the wild beast and the kings of the earth and their armies gathered together to wage war against the one seated on the horse and against his army. And the wild beast was caught, and along with it the false prophet that performed in front of it the signs with which he misled those who received the mark of the wild beast and those who worship its image. While still alive, they both were hurled into the fiery lake that burns with sulfur. But the rest were killed off with the long sword that proceeded out of the mouth of the one seated on the horse. And all the birds were filled with their flesh.”

What occurs during the tribulation is different. The sixth chapter of Revelation describes it as the crash of the system, which is not to be confused with the war at Armageddon. The opening of the sixth seal initiates the time of great distress, which the apostle describes this way: “And I saw when he opened the sixth seal, and a great earthquake occurred; and the sun became black as sackcloth made of hair, and the entire moon became as blood, and the stars of heaven fell to the earth as when a fig tree shaken by a high wind drops its unripe figs. And the heaven departed as a scroll that is being rolled up, and every mountain and every island was removed from its place. Then the kings of the earth, the high officials, the military commanders, the rich, the strong, every slave, and every free person hid in the caves and among the rocks of the mountains. And they keep saying to the mountains and to the rocks: “Fall over us and hide us from the face of the One seated on the throne and from the wrath of the Lamb, because the great day of their wrath has come, and who is able to stand?”

Jesus used similar phraseology when he spoke of developments in connection with the tribulation, when he said: “Immediately after the tribulation of those days, the sun will be darkened, and the moon will not give its light, and the stars will fall from heaven, and the powers of the heavens will be shaken.”

Note that with the opening of the sixth seal the terrified people of earth plead with the “rocks” and “mountains” to protect them from the wrath of the Lamb; whereas, in the 19th chapter the kings and their armies actually go into battle against Christ. So, the tribulation is a precursor of the final war, not the war itself. What occurs as a result of the opening of the seals is that the governments of the world will cease to function for a time. After a period of chaos the governments will recover. That is what is symbolized by the miraculous healing of the fatal head wound of the beast. Also, the two-horned lamb beast when it rises up from the earth —from the grave, and the emergence of the scarlet-colored beast from the abyss, which John informed us symbolizes the eighth king that springs from the seven. (Not that the eighth king goes into the abyss, but the recovery of the beast transforms it into the eighth king.)

The prophecy of Isaiah refers to the recovery of the nations and their being made to stand before God for the judgment, where Jehovah says to them: “Listen to me in silence, you islands; let the nations regain their strength. Let them approach; then let them speak. Let us come together for judgment.” —Isaiah 41:1

So, although the crash of the system will seem like the end of the world the nations will recover in some fashion —like the mythical phoenix rising up from the ashes. That is when the reign of the last king begins, the eighth king.

As we know, the image with feet of iron and clay represents the Anglo-American duo. But what does the metallic image itself symbolize? The image, in its totality, pictures the eighth kingdom. Does not Revelation confirm for us that the eighth king springs from the seven? And the 13th chapter portrays the two-horned beast giving power to the image of the beast. As regards the image in Daniel’s prophecy, it is made to stand upon the feet of iron and clay, which harmonizes with Revelation. (The reason Daniel’s image is only composed of five metals and not seven is because Egypt and Assyria and already had their day when Nebuchadnezzar was pictured as the head of gold.) But the reason the Kingdom stone strikes the image on its feet of iron and clay, thereby toppling the entire image, is because the  image, the eighth king, is supported by the Anglo-American duo —now and in the post-crash world.

The eighth chapter of Daniel envisions a fierce looking king who becomes mighty, but not by his own power. That sheds light on how the United Nations will become a world government, because the nations will empower it —forfeiting their own sovereignty to do so. 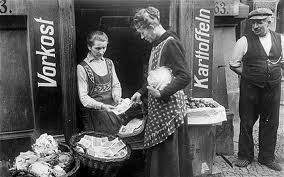 As regards the “unity” that Hitler achieved under his Third Reich, that is an interesting comparison. Germany had lost the war, but London was intent on completely crushing its continental rival; so, the Treaty of Versailles imposed impossible war reparations on Germany, which caused more suffering than the war itself. In order to meet its payments the Weimar government cranked up the printing presses. At first there was a blush of prosperity. But as the presses continued to crank out more and more money, the Reichsmark began to inflate, which is to say it began losing its value —its purchasing power —which quickly led to hyperinflation and money became totally worthless.

For a short while before the collapse employees asked to be paid daily at noon and they would rush out and buy something, knowing that by the end of the day the cost for the same item would be considerably more. You may have seen pictures of Germans toting around baskets full of money because that’s what it took to buy a single loaf of bread. Bundles of cash were more useful as fuel for the fire than anything else. Ultimately, the German economy collapsed.

From that desperate time arose the Nazis and the charismatic Hitler. He promised to make Germany great again. And he made good on his promise, to an extent. Unfortunately for the world and for the German people, as Germany regained power the Nazis launched what became the Second World War.

We may expect a similar thing in the future. War and economic collapse will bring people into a desperate condition. They will be happy to have any kind of government —even communism —instead of anarchy and chaos. Just as Hitler reinforced national unity with the Gestapos’ reign of terror, the world government that will come into power after the crash will kill anyone who does not worship it. That is how the nations will be brought into judgment. Those who worship the image of the beast will be destroyed by Christ at Armageddon.

“In the days of those kings the God of heaven will set up a kingdom that will never be destroyed. And this kingdom will not be passed on to any other people. It will crush and put an end to all these kingdoms, and it alone will stand forever, just as you saw that out of the mountain a stone was cut not by hands, and that it crushed the iron, the copper, the clay, the silver, and the gold.”