The Ax is Lying at the Root of the Trees

The Ax is Lying at the Root of the Trees

With the ongoing pandemic and economic disruption distracting everyone, the dying Anglo empire is turning its gun sights on China. The propaganda and financial wars are already well underway. It is seemingly just a matter of time until the world is engulfed in total war.

(Just as a reminder, since the development of the atomic bomb 75 years ago none of the nations that currently possess nuclear weapons have ever been at war with other nuclear powers —not directly anyway.)

Meanwhile, in the United States, more and more people have a growing sense of unease and apprehension due to media-stoked racial tensions and the unleashing of ANTIFA anarchists, coupled with the absolutely insane movement to defund the police —all part of the ongoing deep-state operation in the run-up to the 2020 presidential election, which, with fraud-prone mail-in votes is certain to be the most chaotic ever. Throw in the looming indictments of FBI and CIA officials for illegally spying on the president and the nation could erupt into pandemonium, which would seem to be the goal of the globalist who are intent on plunging America into a second civil war. (See article: War is just a shot away)

On top of it all, the financial system is being flooded with a Tsunami of money at the rate of about a trillion dollars per month in a desperate scheme to forestall the collapse of the Wall Street banking system. As the stock markets are buoyed ever higher in the gusher of money that is being unleashed, making the billionaires even richer, the economic destruction caused by the pandemic lockdown is pushing millions of unemployed people towards the abyss of poverty and homelessness. An epic economic, political, and social implosion is inevitable.

The chess-masters are openly talking about an economic “reset” —a euphemism for a return to some sort of feudalism. The goal of the empire has always been to overturn the present nation-state system and establish a one-world government and drastically reduce the world’s population by billions. Ultimately, the demonic overlords are intent on eradicating Christianity generally and specifically, those who belong to Jehovah. 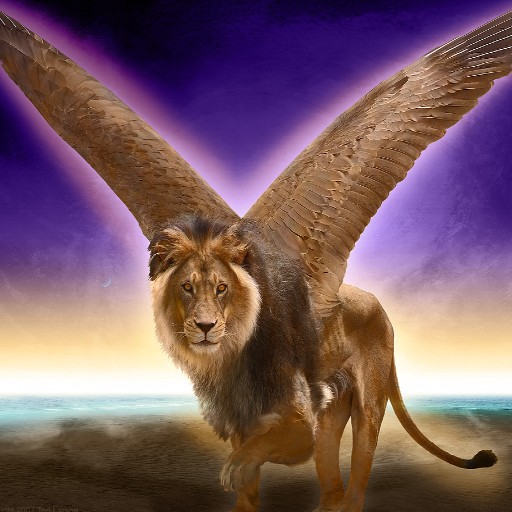 Ancient Babylon is featured prominently in Bible prophecy. Under King Nebuchadnezzar Babylon reached its zenith —conquering a large portion of what is now South Asia, as well as the Middle East and North Africa. Empires by nature exist by looting, plundering and enslaving peoples and nations. Babylon was especially rapacious. The prophetic book of Daniel appropriately symbolized Babylon as a ferocious, flying lion with wings of an eagle.

The Chaldeans were very religious too. They attributed their military conquests to the superiority of their gods. In reality, their gods were demons. However, Jehovah is the God of gods. And when it suits his purpose he uses Satan’s beastly empires to accomplish his judgments. This principle is clearly expressed in the 13th chapter of Isaiah, where Jehovah declares: “I have issued the command to those whom I have appointed. I have summoned my warriors to express my anger, My proudly exultant ones. Listen! A crowd in the mountains; it sounds like a numerous people! Listen! The uproar of kingdoms, of nations gathered together! Jehovah of armies is mustering the army for war. They are coming from a distant land, from the extremity of the heavens, Jehovah and the weapons of his wrath, to bring ruin to all the earth. Wail, for the day of Jehovah is near! It will come as a destruction from the Almighty.” — Isaiah 13:3-6

WHY ARE THE NATIONS AGITATED?

As regards “the uproar of kingdoms and nations gathered together” the second Psalm speaks of this very thing. It says: “Why are the nations agitated and the peoples muttering an empty thing? The kings of the earth take their stand and high officials gather together as one against Jehovah and against his anointed one. They say: “Let us tear off their shackles and throw off their ropes!” The One enthroned in the heavens will laugh; Jehovah will scoff at them. At that time he will speak to them in his anger and terrify them in his burning anger, saying: “I myself have installed my king on Zion, my holy mountain.” 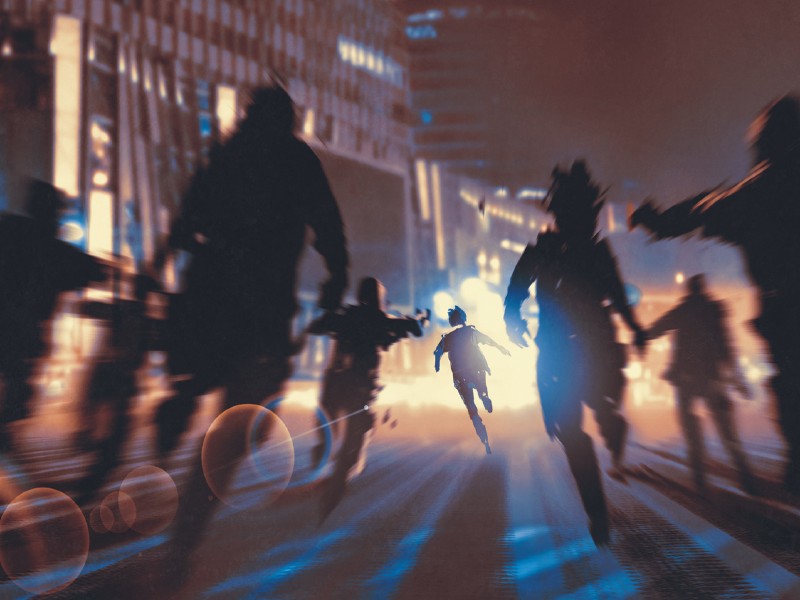 Jehovah’s Witnesses have been stupefied into believing the prophetic Psalm was fulfilled in 1914. How were the nations gathered together to oppose Jehovah back then? Surely it could not have been the impotent League of Nations, of which the United States was not even a member. If the high officials have taken their stand against God over 100 years ago why has not Jehovah terrified them in his anger? Why have Jehovah’s Witnesses found legal protection from the very institutions that are supposedly in an uproar and determined to throw off any exactions imposed upon them by Jehovah’s anointed one? Jesus also spoke of the uproar of nations in the 21st chapter of Luke. Concerning that day, Jesus foretold: “…on the earth anguish of nations not knowing the way out because of the roaring of the sea and its agitation. People will become faint out of fear and expectation of the things coming upon the inhabited earth, for the powers of the heavens will be shaken.”

The Watchtower used to claim the prophecy was undergoing fulfillment. However, now they realize it is not. Contradictorily, the Governing Body still insists that we have seen all the things Jesus foretold, even though no one living personally experienced the First World War or the anguish of nations. The roaring of the sea has to do with the uproar of nations —harmonizing with the Psalm. We can see it now coming on. There is no question a great tempest is brewing, moving peoples and nations like the wind whips up waves on the sea. Surely, when nuclear-armed missiles streak through the skies Jehovah’s Witnesses will understand.

As already stated, Nebuchadnezzar ruled over a vast region of the world —encompassing some 120 jurisdictional districts. But it was not a global government. Is it mere hyperbole that Jehovah’s army brought “ruin to all the earth”? No. The Greater Babylon is going to ruin all the earth.

To confirm that Babylon casts a far-reaching shadow into the rapidly approaching future consider verses 9-11: “Look! The day of Jehovah is coming, cruel both with fury and with burning anger, to make the land an object of horror, and to annihilate the land’s sinners from it. For the stars of the heavens and their constellations will not give off their light; the sun will be dark when it rises, and the moon will not shed its light. I will call the inhabited earth to account for its badness, and the wicked for their error. I will put an end to the pride of the presumptuous, and I will humble the haughtiness of tyrants.”

Jesus spoke of his coming as a thief in the night to initiate judgment day. In the book of Matthew Jesus used similar foreboding imagery as Isaiah, saying: “Immediately after the tribulation of those days, the sun will be darkened, and the moon will not give its light, and the stars will fall from heaven, and the powers of the heavens will be shaken.”

The powers of the heavens may refer to the governmental authorities who rule over the earth. The opening of the sixth seal in Revelation depicts the stars of heaven falling and every mountain and island being moved —representing seemingly permanent institutions being rocked from their foundations.

Jehovah goes on to say: “I will make mortal man scarcer than refined gold, and humans scarcer than the gold of Ophir. That is why I will make the heavens tremble, and the earth will be shaken out of its place at the fury of Jehovah of armies in the day of his burning anger.” (vs 12-13)

The sky is not going to going to tremble with fear, neither is the planet literally going to be shaken out of its orbit. Again, that is merely symbolism. Civilization, from the highest to the lowest is going to be impacted by the day of Jehovah. Evidently, the British Empire’s long-standing policy of drastic population reduction is going to be fully implemented. Jehovah is going to allow a global genocide the likes of which has never occurred, nor will ever occur again. The survivors who will make up the great crowd will be very few compared to earth’s teeming billions. Scarcer than refined gold, indeed!

In the 14th chapter of Isaiah God judges Babylon after He is done using its weapons of war. In the aftermath of Babylon’s execution, the nations prophetically speak and say: “Even the juniper trees rejoice over you, along with the cedars of Lebanon. They say, ‘Ever since you have fallen, no woodcutter comes up against us.’”

The nations are likened to trees and Babylon is the “woodcutter.” In the 31st chapter of Ezekiel Egypt is portrayed as a majestic cedar tree that provides shade for all the earth. Jehovah gives the command to have it cut down, which actually occurred when the Babylonian woodcutter invaded Egypt.

A long time ago the Watchtower recognized that the fall of Egypt foreshadows something much greater. It is evident due to the fact that the 30th chapter of Ezekiel uses the same apocalyptic language and speaks of the unique day of Jehovah. “Wail, ‘Alas, the day is coming!’ For the day is near, yes, a day of Jehovah is near. It will be a day of clouds, an appointed time of nations.”

The prophecy of Ezekiel portrays Egypt as the greatest tree in comparison to lesser trees —meaning, simply, that Egypt is the greatest nation on earth. Ezekiel 31:8 states: “No other cedars in the garden of God could compare to it. None of the juniper trees had boughs like it, and none of the plane trees could match its branches. No other tree in the garden of God could rival its beauty.”

Like in all other prophetic interpretation, the Watchtower is utterly lacking in insight —inexplicably claiming that the greatest tree in the forest represents, not the greatest nation, but all the nations —the entire political system. What utter cluelessness!

The United States of America is recognized as the greatest nation that has ever existed. It is what is foreshadowed by the Egyptian cedar. Babylon foreshadows the soon-to-emerge eighth king, called the fierce-looking king who brings the mighty ones of the earth to ruin in the 8th chapter of Daniel. America is destined to be cut down by the tyrants of the nations, no, not at Armageddon, but to commence the impending day of Jehovah. (The Downfall of America)

As one of the prophets once said: “The ax is already lying at the root of the trees.”