“To Jehovah belong the earth and everything in it, the productive land and those dwelling on it. For he has solidly fixed it on the seas and firmly established it on the rivers.” — Psalms 24:1-2

The opening stanza of the 24 Song is not hyperbole. It is a declaration of ownership. As the Creator, Jehovah is the sole owner of the earth and all life upon it—including, foremost, mankind.

The contents of the Bible—from Genesis to Revelation—constitute a legal document. The writing and compiling of the 60+ documents that are the Bible were not undertaken by men of their own accord. All of them were members of an organization(s) that God established with legally-binding covenants. As an anointed apostle of the heavenly Zion, Paul reminded the Hebrew Christians that the Israelite nation had been entrusted with the sacred pronouncements of God as they existed before Christ. And, of course, that sacred trust was transferred to followers of Christ.

David had personally been chosen by God to become king of Israel. Jehovah established a covenant with David for an everlasting kingdom.

David understood that God’s everlasting covenant meant that his offspring would eventually produce the promised Messiah. Even so, David could not possibly have understood the length, and depth and breadth of God’s purpose to provide a kingdom over Israel. None of the Jews who lived before Jesus had any inkling or expectation of leaving this earth and being transported to heaven. Even Jesus’ immediate disciples could not grasp it at first.

When David wrote the Psalms there was no earthly temple. Only a cloth tent where the ark of the covenant was kept. The ark symbolized Jehovah’s earthly presence. No doubt when David wrote the following he had in mind an earthly mountain: “Who may ascend to the mountain of Jehovah, and who may stand up in his holy place? Anyone with innocent hands and a pure heart, who has not sworn a false oath by My life, nor taken an oath deceitfully. He will receive blessings from Jehovah and righteousness from his God of salvation.”

Jesus revealed something quite amazing. Not only had he lived in heaven for eons before he was born as a man, but he was returning to the place of his original birth. And that is not all. Many of Jesus’ followers are going to follow Jesus and ascend the mountain of Jehovah and reside in his holy place. And to top it off, among the blessings they are to receive God has determined to bestow upon them immortality—something not even the holy angels possess.

On the night of his arrest, Jesus assured his distraught apostles that although he was going away and they could not follow him then he was going to return in order to guide them in their ascent to the holy place of God. At the time the apostles likely imagined that Jesus might return in a familiar, recognizable human form. Eventually, though, their minds were opened to perceive that the return of their Lord would be a glorious affair. Jesus will not return as a lowly human, but rather, as a glorious King of kings and Lord of lords. He will come in the glory of Jehovah. Hence, David wrote:

“This is the generation of those seeking him, of those seeking your face, O God of Jacob.  Lift up your heads, you gates; open up, you ancient doorways, that the glorious King may enter!” — Psalms 24:6-7

Because the Bible, the world’s oldest book, contains God’s prophetic declarations of all the things to come—constituting the written word of God—it is as if the 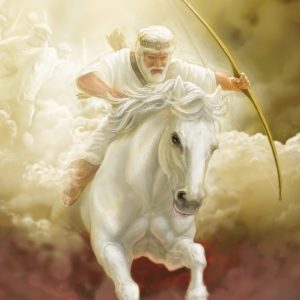 Bible itself is the “ancient doorway,” the portal through which Christ will come. His return to earth will initiate the war to end all wars. Satan, the god of this wicked world, will not go down without a fight. Even now he is mustering his forces to collapse the system and impose a tyrannical lockdown and ultimately wage war directly against those whom Christ comes to escort to the heavenly place. Since ancient times God has not personally engaged in battle with the Devil’s earthly pawns. That will change when Jesus comes in his Father’s name.

Who is this glorious King?

Lift up your heads, you gates;

Open up, you ancient doorways,

That the glorious King may enter!

Who is he, this glorious King?

Jehovah of armies—he is the glorious King.