One of the last things Jesus said before he breathed his last breath is what was recorded a thousand years before in the opening verse of the 22nd Psalm: “My God, my God, why have you forsaken me?”

It is impossible for a person who has been steeped in the phony trinity theology of the churches to grasp the significance of Jesus’ anguished cry. The simple truth is—incomprehensible to the mass of misinformed churchgoers who imagine Jesus is God—Jesus worshipped the God of the Jews whose name is Jehovah. It is not complicated, but it is a simple truth that illudes most people.

The question then becomes: In what sense did Jehovah abandon Jesus when he was most in need of salvation? 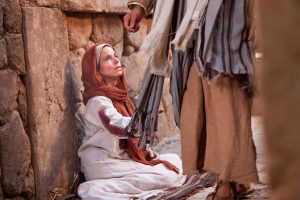 On one occasion as Jesus walked on the road among a crowd of Jewish followers, a woman who was seeking a cure from the miracle-working Messiah stealthily approached Jesus from behind and touched his robe. Immediately the woman sensed that she had been healed of her illness. But Jesus also sensed that power had gone out of him and so he turned and asked who had touched him. Being perfectly in tune with God through his spirit Jesus could sense when power was channeled through him to heal the woman who had secretly touched his outer garment.

No doubt, in the same way, Jesus sensed that God’s spirit had left him alone to die upon the stake. But why? Some may reply that Jesus had to give his life to provide a ransom. And that is surely true, but it does not explain why God forsook Jesus in his hour of need.

It has to do with the issue Satan raised in connection with the man Job. The Devil’s contention is that no one will be loyal to God if they are made to suffer. Transparently, the rebel angel was trying to justify his own course of disloyalty to his God and Father.

According to the Slanderer, if God takes his protection and blessing away from

one of his people and they face suffering and hardship or even death, they will curse God. Of course, the man Job was the focus of the Accuser at the time, but Job really didn’t understand what was going on. He had no knowledge of the fact that he had become the focal point of an issue involving God and one of his angels. And Job was not a perfect man nor did he completely resolve the issue since God had to set Job straight.

Prior to Jesus, the only other perfect man failed miserably to be true to God even in the most ideal setting—in paradise.

As the second (perfect) man the issue Satan raised with Job was going to be resolved one way or the other with Jesus. Hence, Jesus had to momentarily stand alone. His God abandoned him. David continues to speak for Christ: “My God, I keep calling by day, and you do not answer; and by night there is no silence on my part. But you are holy, surrounded by the praises of Israel. In you our fathers put their trust; they trusted, and you kept rescuing them. To you they cried out, and they were saved; they trusted in you, and they were not disappointed. But I am a worm and not a man, scorned by men and despised by the people. All those seeing me mock me; they sneer and shake their heads in derision: “He entrusted himself to Jehovah. Let Him rescue him! Let Him save him, for he is so dear to Him!”” — Psalms 22:2-8

The words of the Psalm were literally fulfilled. As Jesus hung on the stake some of the Jewish religious leaders who were undoubtedly aware that Jesus claimed to be the Son of God mocked him. The gospel account states: “In the same way also, the chief priests with the scribes and the elders began mocking him, saying: “Others he saved; himself he cannot save! He is King of Israel; let him now come down off the torture stake, and we will believe in him. He has put his trust in God; let Him now rescue him if He wants him, for he said, ‘I am God’s Son.’” — Mathew 27:41-43

Actually, Jesus could have saved himself. He could have avoided such an unpleasant outcome altogether. All he had to do was keep quiet when the Jewish high priest put him under oath and demanded to know if he was the Christ, the Son of God. Instead, Jesus responded and said: “You yourself said it. But I say to you: From now on you will see the Son of man sitting at the right hand of power and coming on the clouds of heaven.” — Mathew 26:64

Jesus willingly subjected himself to the murderous Jews because he knew it was God’s will. After he was condemned by the illegal, kangaroo court convened in the dead of the night, Jesus was led off to the Roman authorities and condemned to death. Prior to this moment, God had always watched over Jesus. After all, the Jews had many times tried to kill Jesus but they could not. The only way Satan could get to Jesus is if God abandoned him.

“You were the One who brought me out of the womb, the One who made me feel secure on my mother’s breasts.  I have been entrusted to your care from birth; from my mother’s womb, you have been my God. Do not stay far off from me, for trouble is near and I have no other helper. Many young bulls surround me; powerful bulls of Bashan encircle me. They open their mouth wide against me, like a roaring lion that tears its prey to pieces. I am poured out like water; all my bones are out of joint. My heart has become like wax; it melts deep within me.” — Psalms 22:9-14

Jesus’ apostles were all scattered and confused. They could not intervene. The most powerful men on earth were opposed to Jesus. Like powerful bulls, both the Jewish leaders and the Roman occupiers used their authority to condemn and accuse. The Roman soldiers with spears and swords ensured that no human would alter the outcome.

But humans were just proxies. Behind the curtain, the Devil and his demons were the real attackers and Jesus knew it. This moment was when the serpent struck the heel of the offspring of the woman, as foretold in Eden when the rebellion against God began.

On several occasions during his ministry, demon-possessed people spoke to Jesus, trying to intimidate him. But as Jesus hung on the stake the prevailing demonic spirit spoke through the crowd, opening their mouths wide like a ferocious lion. What cruelty! Who would mock someone at the moment of their death? Wicked demons, that’s who!

Referring to the actual impalement, when spikes were hammered through the bones and flesh of the Son of Jehovah, the Psalm continues: “My strength has dried up like a piece of pottery; my tongue sticks to my gums; you are bringing me down to the dust of death. For dogs surround me; they close in on me like a pack of evildoers, like a lion they are at my hands and feet.” (15-16) 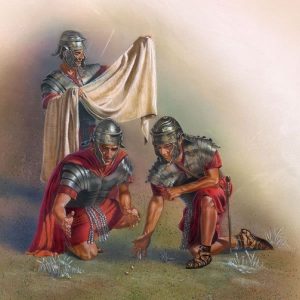 The last thing Jesus said before he expired was that to God he entrusted his spirit. Unlike the majority of mankind under the influence of Satan, who believe the virtually universal demonic lie that humans have a soul or spirit that survives the death of the body, Jesus knew better. Jesus surely knew that he was going “down to the dust of death” and unconsciousness. He was trusting Jehovah to bring him back to life.

Contrary to the foolish gibberish spouted by Bible thumpers, Jesus did not resurrect himself. The One whom Jesus referred to as “my God” did. In that way, God rescued Jesus from his enemies. Although Satan imposed the harshest punishment upon Jesus it was to no avail. Jesus proved himself faithful to God unto death and from death, God redeemed his beloved Son.

In the very next verse, David imputes these words to Christ: “I will declare your name to my brothers; in the midst of the congregation I will praise you.”

The Psalm does not mention anything about resurrection. Why is that? Because, unlike the rest of those who have died and are buried, unconscious as they await

resurrection day, Jesus was only unconscious in death for a few hours, probably less than 40 hours. Immediately after Jesus was revived he told Mary to tell his brothers that he was alive. Jesus has been declaring the name of Jehovah to his spiritual brothers ever since—even up to this very moment.

Because he was faithful not only did Jehovah resurrect Jesus from the dead but he has given Jesus life in himself and the kingship. As King of God’s Kingdom Jesus will be empowered to bring all the dead to life and preserve the living through the end of Satan’s world.

“The meek will eat and be satisfied; those seeking Jehovah will praise him. May you enjoy life forever. All the ends of the earth will remember and turn to Jehovah. All the families of the nations will bow down before you. For the kingship belongs to Jehovah; He rules over the nations.”