Psalms #19 – The heavens are declaring the glory of God

Psalms #19 – The heavens are declaring the glory of God 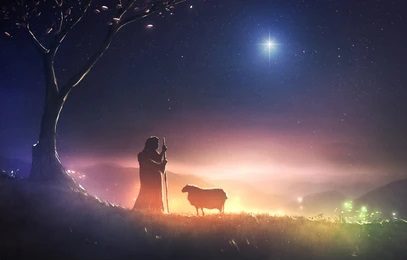 No doubt David had a spectacular view of the night sky 3,000 years ago as he watched over his family’s flock of sheep, day and night. But even he had no idea of how absolutely immense and utterly wonderous the cosmos really is. It would seem that the shepherd/poet was inspired to write these words especially for us: “The heavens are declaring the glory of God; the skies above proclaim the work of his hands. Day after day their speech bubbles forth, and night after night they reveal knowledge. There is no speech, and there are no words; their voice is not heard. But into all the earth their sound has gone out, and to the ends of the inhabited earth their message.” — Psalms 19:1-4a

It is an unfortunate fact of modern life that most people live in large cities and towns that are flooded with artificial night lights (at least for now). As a result of so-called “light pollution,” it is not possible to view even a fraction of the approximately 5,000 heavenly bodies visible to the naked eye. The only luminary that city dwellers are certain to see on a clear night is the moon. And yet, the few thousand heavenly bodies visible on a dark night are only a tiny fraction of the innumerable objects in the heavens.

In 1990 the Hubble telescope was launched in low-Earth orbit. Getting above the protective atmosphere that shrouds the planet allows an undistorted view of the heavens far more so than Earth-bound scopes. And with the development of personal computers and the Internet, virtually everyone can view the marvels of relatively nearby objects and even the farthest reaches of the universe. It compensates for light pollution. (More recently the James Webb scope has peered even deeper into space—back to the beginning of time!)

There is no way the ancients could have known that what appeared to them as a distant speck of light, otherwise known as a star, was in reality not a single body at all, but an immense galaxy or even groups of galaxies each containing hundreds of billions of stars! We, the people living right now, have been given the wonderful privilege of seeing the wonders of the sky above us in a way that was not possible for those who came before us. Surely, the heavens are declaring the glory of God, and anyone who denies that is a senseless fool. As Paul stated: “For his invisible qualities are clearly seen from the world’s creation onward, because they are perceived by the things made, even his eternal power and Godship, so that they are inexcusable.” — Romans 1:20

The first telescope was invented in the Netherlands about 400 years ago. At first, scopes were used mostly for surveying land. However, Galileo made a few improvements to the telescope and pointed it into the night sky to explore the moon and local planets. Thus began the science of modern astronomy.

Based on his observations Kepler solved the mystery of the elliptical movement of planets in our solar system and discovered the universal principle of gravitation. Kepler published a work entitled the Harmony of the World. Why did he call it such?

Kepler “measured each planet’s maximum speed when it was closest to the sun (perihelion), and the minimum speed when the planet was farthest from the sun (aphelion), as if he were observing the planet’s motion from the sun itself. Then, comparing the speeds of neighboring planets, he found that the ratios of these intervals corresponded to those intervals which human beings considered harmonic in musical compositions.” (Lyndon LaRouche on Kepler and Cusa-2007 page 5 PDF)

The movements of the planets relate to the physics of music. Amazing! How did David know that? “into all the earth their sound has gone out, and to the ends of the inhabited earth their message.”

After describing in poetic imagery the movement of the sun across the sky David segued into the vital point, singing: “The law of Jehovah is perfect, restoring strength. The reminder of Jehovah is trustworthy, making the inexperienced one wise.”

Scientists rightly speak of the laws of physics, such as the law of gravity and the laws of thermodynamics, etc. All of the inanimate systems of the universe obey fixed laws, even if some principles governing the physical realm have not been discovered yet. There is no benefit in denying the truth. Jehovah is the Creator and Lawgiver. He put into place “laws” to govern everything from the microscopic atoms and whirring bits of matter to massive black holes. Everything.

Inanimate matter and animals always function within the parameters of what they were designed to do. (Animal instinct is actually an expression of the Creator’s intelligence.) Humans and angels are the exceptions, in that, each is a free moral agent and is not bound to God’s laws governing conduct. In His wisdom, Jehovah has allowed angels to do as they please with no regard for God. The result of the lawlessness of the wicked angels and humans under their

malevolent influence has now reached critical mass and will soon require divine intervention to prevent a mass extinction event in the form of nuclear war.

The law of Jehovah is perfect. Had the first two humans obeyed God’s simple command the Earth would be a lovely paradise and death would be non-existent. Thankfully, God is loyal. Even though most people have no desire to submit to God’s law those who do are blessed. God even provides us with timely reminders of what we should or should not do, provided we are atuned to the subtlety of His voice. As David said: “By them your servant has been warned; in keeping them, there is a large reward.”