Psalms #17 – I am satisfied to awaken to your presence

Psalms #17 – I am satisfied to awaken to your presence 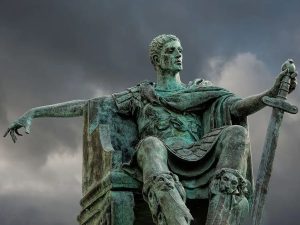 As Christianity spread throughout the Mediterranean region Satan changed tactics and instead of persecuting Christians his earthly emperor, Constantine, befriended them and imposed what passed for Christianity upon the entire realm of the pagan Roman Empire. The scheme has had a far-reaching impact that reverberates to this day.

Several centuries later Mohammed was used by the demonic principalities to create a religion that would thwart any effort to revive Christianity in the Middle East and northern Africa. But because the popes had become so corrupt there were numerous schisms. Once the protestant reformation took hold Europe was embroiled in war after war after war. And of course, during the first half of the 20th century, two world wars began in Europe—the very heart of Christendom.

From our perspective, it is interesting that outside the United States the German people were by far the most receptive to the message of Charles Russell. It seems hardly coincidental that Germany was also ground zero for both world wars.

After the last war ended a vast area of Eastern Europe was gobbled up by the atheistic Soviet Union. Jehovah’s Witnesses had an underground existence in Russia and nations like Poland and East Germany.

Then in the early 90s, the mighty USSR collapsed and the union of soviet republics dissolved. Jehovah’s Witnesses emerged from secrecy and got to work. But freedom for Christians in Russia was not to last. And now the proxy war between NATO and Russia in Ukraine has brought Europe and indeed the world, to the brink of another world war.

It is not that Europeans are more warlike than other peoples. Not at all. It all goes back to Constantine and the development of Christendom. Christendom has been the battleground in the conflict between the Devil and Christ. Even for all of its falsity, hypocrisy, and wickedness, Christendom has served as a placeholder for anointed Christians to finally emerge at the appointed time. Since the last global conflict Christ has overseen a generation of peace in order to accomplish his work.

Just as Israel was the original birthplace of Christianity, America was the fertile seedbed for the rebirth of anointed Christianity. Because of the peace and prosperity America has enjoyed, especially since the Civil War, which only ended 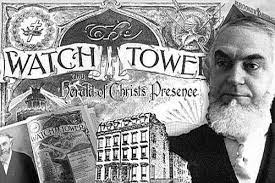 just a few years before the original Bible Students collected in Allegheny, Pennsylvania, thousands of American witnesses have served as missionaries to the farthest reaches of the earth. Some who immigrated to America and learned the truth moved back to their homeland and planted seeds of truth.

But the era of peace and plenty is coming to an end. As Jesus said, ‘work while you have the light. The night is coming when no man can work.’

Satan intends to snuff out the form of Christianity that has developed as a result of the work of Jehovah’s Witnesses and it is Jehovah’s will that he tries. That’s why the lights are going out in Europe and America is being subverted by fascists and all nations are being driven into war and ruin. The great day of Jehovah is near!

Concurrent with the war drive and inflationary collapse of the Dollar system the leadership of Jehovah’s Witnesses has become apostate. That is not to imply that all individuals are apostates—just the Watchtower institution. With its recent vaccine mandate, the institution of the Governing Body has demonstrated themselves to be Judas-like enemies of Christ who stand at the ready to betray all Christians to the coming last kingdom of the beast.

The wars and turmoil soon to engulf the entire planet will serve as the backdrop for the coming of Christ to commence the judgment when he comes with the fire of a refiner.

With the stage set, now consider the prayer of David: “Hear my plea for justice, O Jehovah; pay attention to my cry for help; listen to my prayer spoken without deceit. May you make a just decision in my behalf; may your eyes see what is right. You have examined my heart, you have inspected me by night; you have refined me; you will find that I have not schemed anything bad, and my mouth has not transgressed. As for the activities of men, in accord with the word of your lips, I avoid the paths of the robber.  Let my steps stay on your tracks so that my feet will not stumble.  I do call on you, because you will answer me, O God. Incline your ear to me. Hear my words.” — Psalms 17:1-6

Just as Judas was a thief, the Watchtower has become a house of robbers, as the prophecy of Jeremiah states concerning the keepers of the house of God. It remains to be seen what the scheme is behind the Watchtower’s latest money grab. The fact that the Vatican has issued an identical edict surely indicates something is afoot. Perhaps insiders have been given a heads-up for the timing of the financial crash.

“Show your loyal love in a wonderful way, O Savior of those seeking refuge at your right hand from those who rebel against you. Guard me like the pupil of your eye; conceal me in the shadow of your wings. Guard me from the wicked who attack me, from my mortal enemies who surround me. They have become insensitive; with their mouth they speak arrogantly; now they hem us in; they watch for the chance to cause our downfall.”

Apostasy is defined as a rebellion against God. Obviously, those who have never been bound by the law of God cannot rebel against Him. Just as in the first century, so too in the finale, apostasy begins among the leaders—among the anointed and those disguised as anointed, faithful slaves.

Jesus specifically forewarned that many false prophets and false Christs will arise and if it were possible they would deceive even the chosen ones. Surely, at this late date, no anointed Christian now would fall prey to the false teachings of the clergy. Since the word “christ” literally means anointed, the many false Christs who will seek to mislead the chosen during the dark night coming must surely be those who falsely claim to be anointed Christians. What could be more arrogant than claiming to be faithful and discreet?

In the 11th chapter of the prophecy of Zechariah, the context of which foretold the appearance of Judas and his 30 pieces of silver for betraying the Son of Jehovah, goes on to enlarge to include what is surely the man of lawlessness: “And Jehovah said to me: ‘Now take the equipment of a useless shepherd. For I am letting a shepherd rise up in the land. He will not take care of the sheep that are perishing; he will not seek out the young or heal the injured or feed those able to stand. Instead, he devours the flesh of the fat one and tears off the hooves of the sheep.”

The useless shepherd has arisen and he resides in Warwick castle.

Returning to the prayer of David: “He is like a lion eager to tear its prey to pieces, like a young lion crouching in ambush. Rise up, O Jehovah, to confront him and bring him down; rescue me from the wicked with your sword; rescue me with your hand, O Jehovah, from men of this world, whose share is in this life, those whom you fill with the good things you provide and who leave an inheritance to their many sons. But as for me, in righteousness I will see your face; I am satisfied to awaken in your presence.”

Why did Jesus say that “if possible even the chosen ones” would be deceived—implying that it will not be possible?

Whatever signs and wonders Satan will perform through his earthly minions to conjure a messianic fraud, the chosen will be immune to the deception, no matter how convincing. The reason is they will personally see the face of Christ. They will awaken from a long Watchtower-induced stupor to behold the very manifestation of Jesus. Interestingly, while the Hebrew does not use the Greek word parousia, the latest version of the NWT translates the Hebrew as “presence.” Divine providence perhaps?