Psalms 13-14 – They will be filled with great terror

Psalms 13-14 – They will be filled with great terror 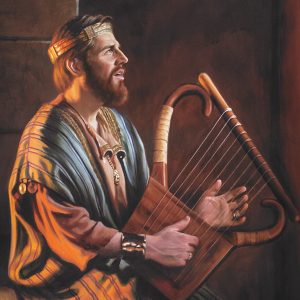 David experienced many hardships and heartaches and made some grievous mistakes. Through it all, though, God blessed and richly rewarded David, even as the fugitive poet sang in the last verse of his brief 13th Psalm: “As for me, I trust in your loyal love; my heart will rejoice in your acts of salvation. I will sing to Jehovah, for he has richly rewarded me.”

It is not possible to know in what circumstances David found himself when he composed Psalms 13 and 14. Perhaps David was languishing in a dank cave when he was hiding from the murderous Saul. Whatever the case, the situation he faced must have been dire: “How long, O Jehovah, will you forget me? Forever? How long will you hide your face from me? How long will I have anxious concern, with grief in my heart each day? How long will my enemy triumph over me?” — Psalms 13:1-2

David’s enemies were many. Even as a fugitive he and his ragtag militia continued to fight against Israel’s implacable foes, the Philistines. Unfortunately, though, David’s worst enemy was his father-in-law, King Saul. Even though Saul at one time recognized that Jehovah was with David, he was still maniacally bent on murdering his son-in-law.

Jesus, the greater David, forewarned that the chosen ones will be persecuted during the tribulation, and just like David, their enemies will be those closest to them: “Furthermore, brother will deliver brother over to death, and a father a child, and children will rise up against parents and have them put to death. And you will be hated by all people on account of my name. But the one who has endured to the end will be saved.”

The account states that a bad spirit from Jehovah would terrorize Saul. What that means is, that God allowed a demonic spirit to envelop the king; whereas, Jehovah did not prevent it even though Saul was his appointed king. Because of his unfaithfulness God did not protect him from evil spirits.

That same evil spirit rules the world now. During the end phase, God will not protect faithless people from being completely over-reached by Satan. Thus, under the influence of the original manslayer members of Christian families will hand their loved ones over to death. Jesus further forewarned that the chosen will be thrown from the synagogue.

After the destruction of Solomon’s temple and the so-called Diaspora (dispersal), synagogues sprang up where the Jews congregated on the Sabbath. Synagogues were the forerunner of Christian meeting places. Of course, the chosen ones will not literally be attendees of Jewish synagogues when Christ returns. Jesus was merely using that as the equivalent of the modern Kingdom Halls.

Christians will be scattered. It will seem as if Jehovah has cast them off and abandoned them. They will echo the words of the Psalm:  “How long, O Jehovah, will you forget me? Forever? How long will you hide your face from me?” It will seem as if the enemy has triumphed over Jehovah’s anointed ones. As if returning from the grave, they will be regathered. No, they will not be gathered

into any sort of earthly organization. The chosen ones comprising the Israel of God will be gathered into the Kingdom of Christ and made to stand upon Heaven’s Mount Zion. Even though when David composed the 14th Psalm Israel had not been shattered or scattered, nonetheless David spoke prophetically in regards to the regathering. “O that Israel’s salvation may come from Zion! When Jehovah gathers back his captive people, let Jacob be joyful, let Israel rejoice.”

The 14th Psalm opens deriding the fool who says in his heart there is no Jehovah. It is not as though they are atheists or evolutionists. They do not give voice to their inner disbelief. It is his heart that the fool does not acknowledge Jehovah. They simply have no faith. Like the Jewish leaders described in the prophecy of Zephaniah, they do not believe that God is concerned enough to do anything, good or bad.

It would appear, though, that the fools at one time at least outwardly acknowledged Jehovah. But they turned aside. In other words, they became apostates. That is evident from the next two verses: “They have all turned aside; they are all alike corrupt. No one is doing good, not even one. Do none of the wrongdoers understand? They devour my people as if they were eating bread. They do not call on Jehovah.” — Psalm 14:3-4

Reasonably, a person cannot be expected to call on Jehovah if they do not know his name. But just knowing God’s name is not good enough. Saul knew God’s name, yet he inquired of a witch.

That David’s Psalms are prophetic is evident from what is stated next: “But they will be filled with great terror, for Jehovah is with the generation of the righteous.  You wrongdoers try to frustrate the plans of the lowly one, but Jehovah is his refuge.”

Because of their being brought into union with Jesus the chosen ones have Christ’s righteousness and perfection credited to them. Their unspiritual enemies may just see the fragile, flawed human. And one characteristic of all humans is that we are easily deceived. When the great tribulation is cut short and Babylon is left standing the wrongdoers will try to frustrate the righteous. They will make false claims regarding the presence of Christ being here and there. But it will not be possible to deceive the chosen then. They will be in Jehovah’s secure refuge. And Christ will appear to them. Then Christ will make his presence known to his enemies and they will be filled with great terror.

“But you who suffer tribulation will be given relief along with us at the revelation of the Lord Jesus from heaven with his powerful angels in a flaming fire, as he brings vengeance on those who do not know God and those who do not obey the good news about our Lord Jesus. These very ones will undergo the judicial punishment of everlasting destruction from before the Lord and from the glory of his strength, at the time when he comes to be glorified in connection with his holy ones and to be regarded in that day with wonder among all those who exercised faith, because the witness we gave met with faith among you.” — 2 Thessalonians 1:7-10