Most people do not know God. They may even be very religious. On the other hand, growing numbers of the billions presently populating the world are convinced that there is no God. In any case, most people go about their lives without giving God much thought.

Even those who are convinced that God exists and who accept Him on His terms, as put forward in the Bible, might find it a challenge to really draw close to Jehovah and have a firm conviction and rely completely upon Someone whom they cannot see or have never had direct contact with.

Ironically, when things are going well, when there are peaceful conditions, when we may be prospering materially, and when our families are well, we are less motivated to be reliant on God. We may just go through the motions of godly devotion. No doubt that is why God allows hardship to come upon us at times to sharpen our focus on our spiritual relationship with the Spirit. In fact, distress is an essential feature of God’s purpose to produce an organization of kings and priests. As every potter knows, the molded clay requires intense heat to achieve the finished product. And God likens himself to a potter.

Jesus foretold a time of distress like no other will come upon the entire inhabited earth. More and more people, even non-Christians, are becoming uneasy over the steadily deteriorating system that became apparent with the COVID lockdowns. A whole movement has developed of so-called “preppers”—people who are preparing for food shortages and societal breakdown. Some of the wealthiest people are constructing luxury underground bunkers where they intend to hole up and survive a nuclear holocaust. Others have seagoing yachts or have even acquired private islands where they hope to be isolated from the chaos that is descending on civilization.

Jesus has assured us that there will be survivors of the coming crash. However, it will not be because they have stockpiled food and ammo or have a secure hideaway. Their survival will be because God will provide them entrance into His secret hiding place—accessible only to those with faith.

Jehovah is accessible. He once listened to a man and somehow God stopped the sun from moving across the sky, which would seem to have required the Almighty to momentarily stop the Earth from spinning on its axis. No problem. It is too astoundingly miraculous to even contemplate the physics involved.

In regards to the now-impending global catastrophe, Jesus said: “In fact, unless those days were cut short, no flesh would be saved; but on account of the chosen ones those days will be cut short.”

Since the chosen ones will not continue living in the flesh along with the great crowd, and in fact, Jehovah’s eternal purpose cannot be accomplished until every single one of the 144,000 chosen ones are with Christ in heaven, why ought the tribulation be cut short on their account since their flesh will not be saved anyway? Because Jehovah will listen to the prayers of the holy ones.

The events recorded in the eighth chapter of Revelation are situated on the timeline immediately following the cutting short of the great tribulation when the chosen are sealed: 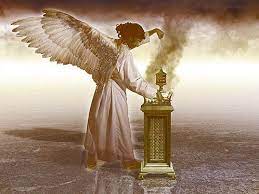 “When he (the Lamb) opened the seventh seal, there was silence in heaven for about half an hour. And I saw the seven angels who stand before God, and seven trumpets were given to them. Another angel, holding a golden incense vessel, arrived and stood at the altar, and a large quantity of incense was given him to offer it with the prayers of all the holy ones on the golden altar that was before the throne. The smoke of the incense from the hand of the angel ascended with the prayers of the holy ones before God. But right away the angel took the incense vessel, and he filled it with some of the fire of the altar and hurled it to the earth. And there were thunders and voices and flashes of lightning and an earthquake. And the seven angels with the seven trumpets prepared to blow them.”

Regarding the prayers of the holy ones during that critical time I refer the reader to the opening stanza of the fourth Psalm of David:  “When I call, answer me, O my righteous God. Make a way of escape for me in my distress. Show me favor and hear my prayer. You sons of men, how long will you turn my honor into humiliation? How long will you love what is worthless and search for what is false? Know that Jehovah will treat his loyal one in a special way; Jehovah will hear when I call to him.”

Being adopted to become an immortal son of the great God Jehovah is an inestimable honor. Once the sealing takes place the honor is confirmed. The heavenly destiny of the chosen at that point is assured.

At that time, though, post-tribulation, after the beast revives from its sudden death swoon, the world under Satan’s dominion will allow no place for anyone to speak the truth. It is getting that way now. Then calling upon the name of Jehovah will be considered reprehensible—the worst sort of crime.

Everyone will be required to worship the image of the beast and the Devil who saved them from the collapse of civilization. The worldlings will demonstrate their heart’s deep-seated love of what is worthless and their fondness for falsehood. It will be beyond their ability to admit that there exists a God, much more so that his name is Jehovah and that He listens to his loyal ones and treats them in a very special way.

The most beautiful thing is, that those whom Jehovah has chosen and will yet choose, are chosen from among the weak and foolish things of the world—from among those who are looked down upon. Paul explained that the reason is to put to shame the wise and powerful ones of the world—You know, those Ivy Leaguers and billionaires who rule the world, or think they do anyway.

“Be agitated, but do not sin. Have your say in your heart, upon your bed, and keep silent. Offer the sacrifices of righteousness, and trust in Jehovah. There are many saying: “Who will show us anything good?” Let the light of your face shine upon us, O Jehovah.” — Psalms 4:4-6

Other translations offer a different rendering. The American Standard says: “Stand in awe, and sin not: Commune with your own heart upon your bed, and be still.” 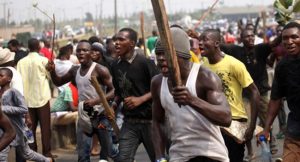 God intends to allow the wicked ones who will then be completely under Satan’s control, to momentarily have their way. The outrages and atrocities will be hard to bear. That is the reason for the counsel: “do not sin.” Just trust Jehovah. Jehovah let the Egyptian Pharoah demonstrate the depth of his contempt for God and used his animosity to lure him into the watery death trap.

As for the light of Jehovah’s face shining upon us, we should not consider that expression to be metaphoric. At some point, during the darkest period in human history, Jesus will manifest himself to the chosen. They will see him face-to-face; as Paul said: “For now we see in hazy outline by means of a metal mirror, but then it will be face-to-face.” — 1 Corinthians 13:12

As Jehovah’s Witnesses know, the Greek word parousia literally means “being alongside.” If words mean anything the parousia of Christ will involve Jesus coming alongside the chosen in order to minister to them. Jesus spoke of this very thing in the 12th chapter of Luke, saying: “Be dressed and ready and have your lamps burning, and you should be like men waiting for their master to return from the marriage, so when he comes and knocks, they may at once open to him. Happy are those slaves whom the master on coming finds watching! Truly I say to you, he will dress himself for service and have them recline at the table and will come alongside and minister to them.”

The parousia will be the ultimate fulfillment of the Evening Meal that marked the beginning of the calling and choosing. That was also the occasion when Jesus girded himself as a lowly house servant and washed the feet of the apostles. Christ’s coming alongside his watchful slaves and dressing himself for service in order to minister to them will mark the end of the Christian Era.

The concluding stanza of the fourth Psalm ought to be understood to be the result of Jesus’ ministry to his special ones: “You have filled my heart with greater rejoicing than those who have an abundant harvest of grain and new wine. I will lie down and sleep in peace, for you alone, O Jehovah, make me dwell in security.”