Psalms #15-Oh Jehovah, who may be a guest in your tent?

Psalms #15-Oh Jehovah, who may be a guest in your tent? 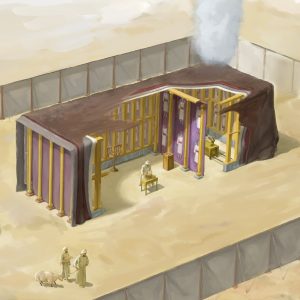 When David became king Jerusalem was occupied by the Jebusites—a tribe of Canaanites. David captured the city and eventually had the movable tent that served as God’s temple brought to Zion along with the ark of the covenant. David himself could not enter the tent. Only the levitical priests could. And only the high priest was authorized to enter the inner compartment where the ark was—and only once per year on Atonement Day. That makes the opening words of David’s song all the more interesting: “O Jehovah, who may be a guest in your tent? Who may reside in your holy mountain?” — Psalms 15:1

What does it mean to be a guest in Jehovah’s tent?

Originally, the first man, Adam, spoke to God directly. Adam did not even need to pray. Think of it, he didn’t have to ask for mercy or beseech God for forgiveness. He needed no mediator or intercessor to represent him before God. He certainly didn’t need a church or temple. Eden was God’s temple—his paradisiacal tent. And Jehovah used to stroll through the garden on a daily basis and he and the naked man would have a chat.

However, Adam and his lovely wife were merely guests in Eden. Of course, God intended that they be permanent residents; he welcomed them and gave them everything—everything, except one tree in the middle of the garden—a unique specie of tree; a beautiful tree with lovely flowers and fruit that was the exclusive

property of Jehovah God. Because they took something that belonged to God, thereby showing a gross lack of respect for their gracious Host and Life-giver, God had his guests unceremoniously ushered out of Eden—never to return.

Outside of Eden life was much different. God was not nearly so accessible. People were more or less on their own. After the Flood, though, God gradually began creating a way of approach. God contacted Abram. Later God spoke to his sons, Issac and Jacob. Then Moses organized the 12 tribes into a nation. David did his part and Solomon did too, constructing a permanent temple to replace the tent. Most importantly, certain men served as God’s spokesmen, otherwise known as prophets. And their messages were carefully recorded and safeguarded in what eventually became known as the Holy Bible.

Finally, Jesus was born into the Israelite nation. As the Messiah, he revealed to his followers that he is the only way to God. Amazingly, although his Jewish followers had no expectation of it, Jesus revealed to them that because he had come down from Heaven he had direct, personal access to God. He also disclosed that in his Father’s grand house there are many abodes and that those whom God approves are to be guests, not in any sort of earthly tent, but in Heaven—in God’s very presence. Thus, they would reside in Jehovah’s holy

mountain in the spirit dimension. But first, Jesus had to prepare that place, which involved giving his earthly life and returning to God above.

Of course, “many dwellings” does not mean an infinite number. It turns out that God has only made arrangements for 144,000 special guests. True, many are invited but only a relative few are chosen.

What about everyone else? Revelation reveals that the symbolic tent of God will descend from Heaven and God himself will be with the un-numbered people who will survive the end of the world.

It is amazing. If Satan had not slandered Jehovah and called into question his character, implying that God did not really trust his guests, not because they were untrustworthy as much as God did not want to share Himself to the full extent, God decided to take some of Adam’s dying offspring and cause them to be born again as immortal, indestructible beings with life in themselves just like Jehovah himself possess, the likes of which has never existed. Paul said it best: a new creation is something.