Over the centuries there have been countless demon-inspired deceptions perpetrated in the name of God and Christ. The nonsensical doctrine of the Trinity is undoubtedly the most common and pervasive. But surely the Watchtower Society’s 1914 parousia doctrine will eventually be accounted as one of the greatest hoaxes of recent times. That so many could be so thoroughly hoodwinked is all the more astounding in view of the fact that Jehovah’s Witnesses are generally the most biblically literate, studious and truth-loving.

But Jehovah’s Witnesses can hardly be faulted for believing that the First World War and the horrific Spanish Flu pandemic that swiftly swept the globe in 1918 was a result of the opening of the seals of the Apocalypse. After all, no Christian wants to be grouped with those who would ridicule the presence of Christ.

But on the other hand, neither should we allow ourselves to be quickly shaken from our reason and believe proclamations regarding the presence of Christ and the arrival of the day of Jehovah that are untrue. Did not the apostle Paul specifically warn Christians to be on guard against unreasoningly accepting apostolic-like official announcements and authoritative writings that would falsely proclaim that the parousia and day of Jehovah is here?

Most disconcerting, Paul indicated that this fraud would emanate from Satan’s man of lawlessness within the spiritual temple of God and would be directed specifically at the chosen ones and would immediately precede the actual manifestation of Christ. Paul indicated that God would allow an operation of error to go to those who know the truth in order to test their love of the truth at the genuine manifestation of Christ. While the wars and food shortages, pandemics and earthquakes of the past century may be convincing to many who make a cursory examination, other aspects of the conclusion are much less in evidence – that, having to do with the judgment of the slaves of Christ.

Keep in mind that when the disciples asked Jesus to explain when the desolation of the holy place would come about and what would be the sign of his presence and the conclusion of the system of things, Jesus also related a series of illustrations emphasizing foremost the settling of accounts with his disciples. By far the most oft-cited illustration by the Watchtower Society has to do with the appointment of the faithful and discreet slave over all of the master’s belongings. In the same context, Jesus also related the illustrations of the wise and foolish virgins and the master who entrusted his silver talents to his slaves.

For many decades the official teaching of the Watchtower regarded all three illustrations to have already been fulfilled. However, in 2013 there was a major adjustment. (There are a series of articles on the Watchman’s Post that examined the Watchtower’s new light.)

The Watchtower now believes that the appointment of the faithful slave over all of the master’s belongings has not occurred. This, of course, is true and is what was presented to them in the first edition of Jehovah’s Himself Has Become King published in 2005.

Now consider more closely Isaiah 22:15-19 and the Watchtower’s interpretation of it.

“Go, enter in to this steward, to Shebna, who is over the house, ‘What is there of interest to you here, and who is there of interest to you here, that you have hewed out for yourself here a burial place?’ On a height he is hewing out his burial place; in a crag he is cutting out a residence for himself. ‘Look! Jehovah is hurling you down with violent hurling, O able-bodied man, and grasping you forcibly. Without fail he will wrap you up tightly, like a ball for a wide land. There you will die, and there the chariots of your glory will be the dishonor of the house of your master. And I will push you away from your position; and from your official standing one will tear you down.”

Prior to their major adjustment in 2013, the Watchtower had claimed that this aspect of prophecy was fulfilled in 1918. Here is what the Society’s commentary on Isaiah states under the chapter entitled, Lessons About Unfaithfulness:

Shebna’s experience reminds us that among those who claim to worship God, those who accept privileges of service should use them to serve others and to bring praise to Jehovah. They should not abuse their position in order to enrich themselves or gain personal prominence. For example, Christendom has long promoted herself as an appointed steward, the earthly representative of Jesus Christ. However, just as Shebna brought dishonor on his father by seeking his own glory, Christendom’s leaders have brought dishonor on the Creator by amassing riches and power for themselves. Hence, when the time of judgment “to start with the house of God” came in 1918, Jehovah removed Christendom. Another steward was identified—“the faithful steward, the discreet one”—and appointed over Jesus’ earthly household.

While the Governing Body condemns the clergy, in reality, they judge themselves – at least as an institution. Is that not what God long ago said? — “I will treat them according to their ways, and I will judge them as they have judged. And they will have to know that I am Jehovah.” — Ezekiel 7:27

It is as if the Governing Body has carved out an honored and comfortable place for itself within the organization – high up on a crag, as it were. “Cutting out a residence for himself” well describes the grand palatial new headquarters nestled in the peaceful countryside of New York State —far away from the hubbub and grime of Brooklyn —built with the slave labor of Jehovah’s Witnesses. How like the clergy the leaders of Jehovah’s Witnesses have become!

The leadership of the Watchtower continually glorifies itself —praising itself as the infallible faithful and discreet slave that is self-assured of the master’s blessing.  It is not uncommon for the Governing Body to publish photos of themselves in their literature, either as a group or individually.

Some years ago the publishers were berated because most did not know the names of the individual members of the Governing Body. The congregations were exhorted to memorize their names as if they were the twelve apostles of Christ. 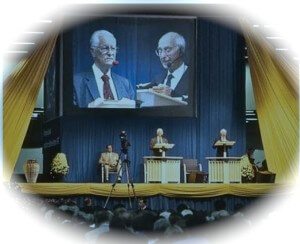 (The Governing Body member in the photo – on the left of the assembly hall jumbotron – is the now-deceased, Lloyd Barry. He personally signed off on all the forms the Watchtower was required to submit to the United Nations’ Department of Public Information annually in order to maintain their membership as an associate-level NGO. To this day the Governing Body lyingly claims they did not do anything improper. Although the Society hastily dissolved their partnership with the UN when the Guardian newspaper exposed them, they claimed that they were misled by some UN clerk for ten years and that opposers made false accusations.)

So, according to biblical standards, the Watchtower Society is unrepentant and therefore must answer to Jehovah for their sin and for stumbling so many by their prideful hypocrisy. They are certain to provide a sobering lesson about the consequences of unfaithfulness when the master of the house arrives.

It is because of the emphasis upon the “slave” that Jehovah’s Witnesses, from the lowliest publisher to circuit and district overseers, lavishly praise and constantly thank the faithful slave for all his wonderful provisions and place the Watchtower organization on an equal footing with Jehovah and Christ themselves.

The leadership has “hewed out” a burial place for itself, in that they become institutional men whose every need is carried for by the organization. For example, the so-called “faithful steward” has his every need cared for by donations, which in many cases come from those who cannot afford such luxuries as healthcare and dentistry for themselves.

Even in death, the Governing Body glorifies itself. For example, while the Society has ordered elders assigned to give funeral talks not to eulogize the deceased, but instead, to use the occasion to give a witness about the resurrection, the same rules do not apply to the Governing Body. Upon their deaths, they are eulogized before the millions who read the Watchtower Magazine. Not only that, but special memorial brochures are published in their honor. (See article: The Watchtower’s Ted Jaracz Brochure)  In this way, he has hewed out a burial place for himself on a height.

How will this come about? As in times past, Jehovah will use an earthly imperial institution to accomplish his will. It is no coincidence that the United States, which up until now has been a safe haven for Jehovah’s Witnesses, has entered into a phase of degeneracy and revolution that seems destined to bring about the dissolution of the constitutional republic.

Unbeknownst to most people, there are powerful forces arrayed against the United States —no, not necessarily enemy nations, but financial interests tied to the British Crown and the City of London —the long-time nemesis of America. The COVID pandemic seems to be an intentional act of biological warfare against the population in order to demoralize and break the will of the people. Meanwhile, the billionaire elites speak openly of a great reset, which will no doubt bring about the long-in-coming financial collapse that will bring the mighty to ruin, along with the holy ones. Gone will be the legal protections and wealth the leaders of Jehovah’s Witnesses have relied upon.

In this way, Jehovah will hurl the Governing Body away like a ball into a wide land. (That is not to say that individuals of the Governing Body will all be adversely judged. It is the institution, the office, which will be thrown down.)

In its place, Jehovah will provide the true Christ. He will become like a father to those with true faith. And Jehovah will place upon him the key of the house of David – in other words, the Kingdom. And as Revelation says of Christ, he will open a door that no one may shut. That is the meaning of the remainder of the 22nd chapter of Isaiah.