The Ax Is Already Lying at the Root! 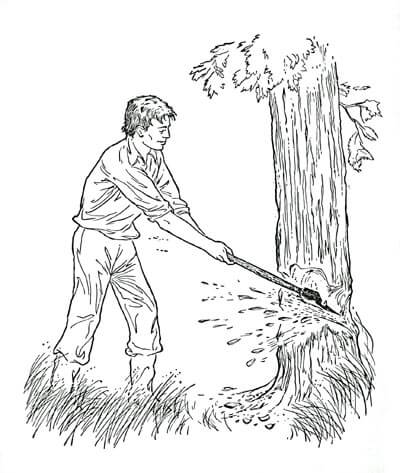 “For instance, we need to guard against succumbing to apostasy, a sin that would make us unfit to glorify God. (Deut. 13:6:9) Let us therefore have nothing to do with apostates or anyone who claims to be a brother but who is dishonoring God. This should be the case even if he is a family member. We are not benefited by trying to refute the arguments of apostates or those who are critical of Jehovah’s organization. In fact, it is spiritually dangerous and improper to peruse their information, whether it appears in written form or it is found on the Internet.”

To be sure, there is a growing number of ex Jehovah’s Witnesses who believe it is their duty to assist Jehovah’s Witnesses to leave their faith. Many of them claim to now know “Jesus” and to have found the real “truth.” They have returned to the vomitus teachings of the churches. The cited verse in the paragraph above – a warning to the Israelites not to allow others to allure them to worship other gods – is certainly a valid principle for Jehovah’s Witnesses.

But the Writing Committee equates any criticism of the organization with apostasy. Is that really honest though?

(The publisher of this Kingdom Bulletin initiated the first of many mailing campaigns in 2004, which reached every kingdom hall in America and Canada, with an eight-page letter detailing the Watchtower’s NGO caper.)

Rather than honestly deal with the massive stumbling block the Governing Body had rolled onto the Path of life, thereby spiritually injuring and stumbling untold numbers of Jehovah’s sheep, Bethel brushed it off as the work of “opposers.”

But does it really dishonor God to expose such double-dealing treachery on the part of the leaders of God’s people? Should not all God-­fearing Christians oppose such brazen hypocrisy on the part of those who presumptuously wrap themselves in the prophet’s mantle?

Another criticism of “Jehovah’s organization” has come from long-­time Jehovah Witnesses who became horrified and appalled over the Watchtower Society’s reckless and treacherous dealings in response to thousands of cases of child abuse within the organization.  Yet, the Watchtower callously considers any who dare expose the evils perpetrated against children as apostates.

The organization really has two faces. In its public face Bethel claims to “abhor” child abuse. It boasts of disfellowshipping pedophiles and preventing known pedophiles from positions of responsibility.

The secret face, though, is hideously ugly.  Many who have had experience with the Watchtower’s Legal Department know that in the past Bethel has strong-armed elders and abuse victims – disallowing them from contacting the police or discouraging cooperation with them. While publicly declaring the organization to be a spiritual paradise, the Watchtower maintains a secret database of over 20,000 pedophiles that menacingly lurk within the congregations, often unbeknownst to parents.

Bethel has even threatened sexually abused children and their parents with ostracism if they make known within the congregation the identities of pedophiles.

While publicly the Watchtower charges elders to look after their congregational flocks, behind closed chamber doors lawyers working for the Watchtower argue that elders have no fiduciary duty to protect children from the crimes of a congregant. And in order to prevent exposure of their two-­faced dealings to the public in open court, the Watchtower has made low-­key out of court settlements with victims, while denying any responsibility, and legally binding the victims with gag orders to prevent them from disclosing the nature of the crimes committed against them and the Society’s culpability.

In demonizing any “who are critical of Jehovah’s organization,” the implication is that the leadership of the organization is above reproach – that no criticism of their teachings or exposure of their secret doings is valid.

In taking this approach the Governing Body have inauspiciously seated themselves on the very throne of God – just as Paul forewarned Christians that the man of lawlessness would do as an immediate prelude to the manifestation of Christ.

“THE RESURRECTION HAS ALREADY OCCURRED”

Interestingly, in the first century certain men had deviated from the truth – in other words, they became apostate. Paul even named two of them by name; namely, Hymenaeus and Philetus, and he warned the brothers that they were subverting the faith of some by claiming that the resurrection had already occurred. So, the bold apostle cited the arguments of the apostates. In other letters Paul taught that the first resurrection would occur during the parousia; hence, the apostle refuted the arguments of those apostates, for the benefit of the brothers back then.

In a strange irony, the Watchtower teaches the very same thing as those first century apostates. It claims the first resurrection has already occurred, supposedly in 1918. Of course, the Society backs up that assertion by claiming that the parousia began in 1914 and that the day of Jehovah is here.

In other words, the Society teaches that all the chosen ones who have died in Christ have already been gathered to him.

This, though, is exactly what Paul warned the brothers about at 2 Thessalonians 2:1:2 regarding the operation of error emanating from the man of lawlessness, where he wrote: “However, brothers, respecting the presence of our Lord Jesus Christ and our being gathered together to him, we request of you not to be quickly shaken from your reason nor to be excited either through an inspired expression or through a verbal message or through a letter as though from us, to the effect that the day of Jehovah is here.”

There is only one source in modern times that makes public statements regarding the presence of Christ having begun and “the day of Jehovah is here.” It is the Watchtower. For the past century (even longer considering that the C.T. Russell originally claimed the presence began in 1874) the Watchtower has been declaring that the presence has begun, that the chosen ones have been gathered together to him, that the day of Jehovah is here. And no one can honestly deny that Jehovah’s Witnesses and their Bible Student forerunners have periodically been shaken from their reason by such claims.

Poor brother Macmillan was so shaken by the hysteria over 1914 that he sold his winter coat that summer, imagining he would be gathered to Jesus before winter.

More recently hundreds of thousands of Jehovah’s Witnesses were shaken from their reason by “verbal messages” and written apostolic‐like letters in the form of Watchtower literature that intimated Armageddon would occur and the thousand-­year reign would begin in 1975.

In harmony with Paul’s warning, Jesus himself forewarned that as a prelude to his actual presence many would falsely announce: “the due time has approached.”

As an example of the Watchtower’s practice of what Jehovah calls “double-­faced divination,” the Society claims the master appointed them over all of his belongings in 1918. That is when the Son of man is believed to have arrived to inspect his Father’s spiritual house.

But in the context of the illustration in the 12th chapter of Luke regarding the faithful slave’s second appointment, Jesus warned all his disciples, especially those who had been appointed to feed the domestics with food at the proper time, that they had better keep their loins girded and their lamps lit because their master was coming at a time they did not think to be it.

Indeed, Jesus forewarned his appointed slaves that he was coming as unexpectedly as a thief in the night. But if that has already occurred, why does the Watchtower contradictorily exhort all to stay on the watch for the coming of the Son of man?

At this moment Jehovah’s great military force is mustering for World War Three – a war the Bethel prophet class has assured Jehovah’s Witnesses could not take place. The days of Bethel’s hypocrisy and double-­faced divination are coming to an end. The coming mighty flood of tyranny will sweep away the Watchtower’s refuge in a lie. Indeed, the master of the house is coming as unexpectedly as a thief in the night!

This Kingdom Bulletin is being mailed to numerous congregations in New York City.