(Question #5) Since the Organization has received “new light” regarding the 1914 generation, and completely changed their view on this, does this mean that all the former Jehovah’s witnesses who were disfellowshipped years ago for the same view the organization is now teaching will automatically be accepted into fellowship again? Were these Ex-Jw’s in fact disfellowshipped for truth and knew things that the governing body did not?

This question reveals a basic ignorance of what Jehovah’s Witnesses used to believe about the so-called 1914 generation, and why they believed what they did.

Jesus, of course, foretold that “this generation will by no means pass away until all these things happen.”

Since Jehovah’s Witnesses presently believe that 1914 was the beginning of the conclusion of the present system of things, when all the things Jesus foretold will happen, as the years and decades rolled by it was natural for us to speculate about the length of a generation. And the only scriptural definition of such is found in the 90th chapter of Psalms, where Moses referred to our days being 70 or 80 years. So, it was assumed that 80 years from 1914 would mark the outside limit, which meant that October 1994 would mark the beginning of the 80th year.

So, allowing for the 80th year to be completed, by October, 1995, the Watchtower was compelled to redefine what Jesus meant by “this generation” in order to retain the 1914 doctrine. And “this generation” has gone through several iterations since then.

But prior to the end of the 80th year it was impossible for anyone to say that “this generation” would not be completed within the 80-year span. Some of Jehovah’s Witnesses may have rejected the 1914 doctrine outright, but that is a different matter.

It is worth noting that the first century Christians labored under a similar error as the Watchtower Society. How so?

In the 21st chapter of John, which was one of Jesus’ last appearances to his chosen apostles, Peter was told his fate by the Lord. In response Peter asked what was to happen to John. And Jesus said: Jesus said to him: “If it is my will for him to remain until I come, of what concern is that to you? You continue following me.”

As a consequence John went on to explain: “So the saying went out among the brothers that this disciple would not die. However, Jesus did not say to him that he would not die, but he said: ‘If it is my will for him to remain until I come, of what concern is that to you?’ This is the disciple who gives this witness about these things and who wrote these things, and we know that his witness is true.” 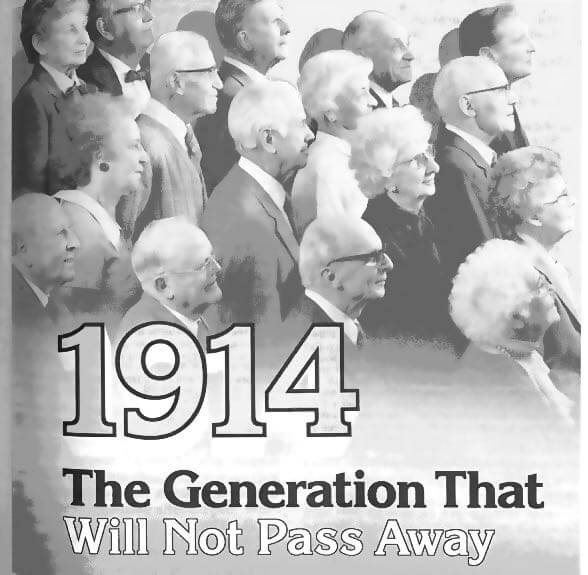 Keep in mind that the gospel of John was not written until late in the first century, perhaps 60 years into the Christian era. So, it seems that the “saying” that went out from the apostles to all the brothers that Christ would return before John passed away persisted all during that generation. In fact, as perhaps the last surviving apostle John apparently felt compelled to set the matter straight before he too left the earthly scene.

But think about it, the apostles started a rumor that all the brothers apparently believed insisting that Jesus would return during John’s lifetime. Keep in mind the apostles had miraculous powers. They healed the sick. Peter raised the dead. They could lay their hands on someone and impart the spirit. They spoke in different languages. They had special revelations from God. So, what disciple could dispute what they said? But, obviously, the apostles were wrong. They had misunderstood Jesus. And it was a misunderstanding that Jesus allowed to persist all during that generation.