The Strong City of Salvation

The Strong City of Salvation

“Is it really so that God has said you must not eat from every tree of the garden?”

With that seemingly innocuous question the father of the lie – the original manslayer – slyly implied that mankind’s Creator was untrustworthy. Ever since then the slanderer has heaped up a mountain of lies to cause mankind to distrust God. However, on the very day the Devil tricked Eve into tempting her husbandly head into disobeying God, Jehovah announced his far-reaching purpose to provide a forthcoming seed of the woman who would be bruised in the heel and ultimately crush the skull of the serpent.

In furtherance of that purpose, God organized the nation of Israel, which ultimately produced the promised messianic seed. The tribe of Judah was specifically selected for that privilege.

With the appearance of Jesus, “the lion of the tribe of Judah,” the first aspect of the Edenic prophecy was fulfilled when Satan maneuvered to have Jesus executed. Jesus’ trust in God was tested to the limit when he submitted himself to the torturous death the original serpent inflicted upon him. But his trust was not misplaced. As promised, God resurrected Jesus from the grave. Hence, the wound the serpent had inflicted upon Jesus proved to be temporary – as if a mere bruise upon his heel.

But it is also God’s will that the offspring of the woman be composed of many others besides Christ – ultimately, 144,000 others, to be exact. These are to share with Christ – ruling the world with him in a heavenly, city-like kingdom. But these must also be tested as to whether or not they will trust Jehovah the same as their Lord.

In the first century, Christians were put to the test in numerous ways. Perhaps the biggest test of faith for the Jewish Christians was that they would eventually be required to part ways with the Jewish religious system, even physically leaving the holy city of Jerusalem in obedience to Jesus’ command.

Paul’s letter to the Hebrews explained that the Jewish system of worship had accomplished its purpose in producing the Messiah and had consequently become obsolete and was due to be phased out of existence. In reference to the city of Jerusalem, which was not only the center of worship for all Jews, but it was also the unofficial headquarters for the apostles too, Paul reminded his spiritual brothers: “We do not have here a city that continues.”

In that same letter to the Hebrews Paul explained that Abraham was awaiting the city with a real foundation, the builder and maker of which is God. It is, then, in reference to that heavenly city that Isaiah wrote: “In that day this song will be sung in the land of Judah: ‘We have a strong city. He sets salvation itself for walls and rampart. Open the gates, you men, that the righteous nation that is keeping faithful conduct may enter. The inclination that is well supported you will safeguard in continuous peace, because it is in you that one is made to trust. Trust in Jehovah, you people, for all times, for in Jah Jehovah is the Rock of times indefinite.’”

Just as Paul wrote concerning Christians not having a city here on earth that continues, should we not expect the same is true today? That would certainly be reasonable. However, Jehovah’s Witnesses have been led to believe that the Watchtower Society itself is the earthly embodiment of the “strong city” that provides salvation for the righteous.

Granted, their commentary is scant and vague, no doubt intentionally so, but the intended suggestion ought to be evident. Here is the Society’s brief commentary on the verse above, as expressed in the first Isaiah volume on page 276:

“While these words no doubt had a fulfillment in ancient times, they also have a clear fulfillment today. Jehovah’s “righteous nation,” spiritual Israel, is endowed with a strong, citylike organization. What a cause for rejoicing, for song!”

As if anticipating the Watchtower’s fraudulent claim of being the strong city of salvation, Isaiah goes on, as if speaking for anointing Christians living now: “O Jehovah our God, other masters besides you have acted as owners of us. By you only shall we make mention of your name.”

In the first century, the Jewish rulers acted as owners of God’s anointed sons. For example, the Sanhedrin ordered the apostles to stop preaching about Christ. A few centuries later the Roman emperor, Constantine, inserted himself as the decider of Christian doctrine. For centuries afterward, any who dared to teach the truth were subject to execution by the clergy. But even as Russell and the original Bible Students ostensibly broke free from the Empire’s control over Christendom, the Watchtower Society itself now acts as the owner of God’s people – increasingly so. Just think, before the Coronavirus pandemic all of Jehovah’s Witnesses were expected to be active in public preaching and teaching in obeyance of Christ. Now the Governing Body has countermanded the head of the congregation and has ordered all active ministers and pioneers to stay off the street.

In furtherance of their assumed ownership as an article of faith, upon pain of ostracism and disfellowshipping, every one of Jehovah’s Witnesses must accept the Watchtower’s 1914 hoax and the related fraud that Christ judged the house of God in 1918.

How does Jehovah intend to deal with this situation? Isaiah continues: “O Jehovah, during distress they have turned their attention to you; they have poured out a whisper of prayer when they had your disciplining.”

As highlighted throughout the book of Isaiah and all the prophets, including Christ, the coming tribulation will destroy that Watchtower Society. Certainly, the future advent of Christ will discredit it beyond repair. The collapse of the claimed strong city of salvation will result in severe disciplining for all of Jehovah’s Witnesses whose faith survives the destruction of the earthly organization. Never again will they attribute salvation to anyone or anything but Jah, Jehovah.

To further demonstrate the great deception the Watchtower has perpetrated against Jehovah and against Jehovah’s Witnesses, as a commentary on the verse above Bethel states:

“In the modern fulfillment, a remnant of chastened spiritual Israel was set free from Babylon the Great and restored to Jehovah’s service in 1919. Revitalized, anointed Christians threw themselves into their preaching work.”

Interestingly, like a magician skilled in the art of sleight-of-hand, in their supposed verse-by-verse commentary on Isaiah, the Watchtower omits quoting or explaining the following verses of the 26th chapter of Isaiah: “Just as a pregnant woman draws near to giving birth, has labor pains, cries out in her birth pangs, so we have become because of you, O Jehovah. We have become pregnant, we have had labor pains; as it were, we have given birth to wind. No real salvation do we accomplish as regards the land, and no inhabitants for the productive land proceed to fall in birth.”

Again, speaking for those who belong to Jehovah during the time of distress (great tribulation), Isaiah confesses that although they had expected to give birth to salvation in themselves, they prove to be powerless – completely helpless.

Surely, in their ardent belief that the Watchtower Society is the strong city of salvation, Jehovah’s Witnesses will eventually be faced with the discomforting reality that “Jehovah’s spirit-directed organization” has served its purpose and has become obsolete and will ultimately be discarded by God. In effect, God will spiritually kill everyone by removing his spirit. Did not Jehovah also remove his spirit from Jesus, which Jesus himself acknowledged when he said: “My God, my God, why have you forsaken me?”

From a spiritually dead condition, the dead will arise: “Your dead will live. My corpses will rise up. Awake and shout joyfully, you residents in the dust! For your dew is as the dew of the morning, and the earth will let those powerless in death come to life.” — Isaiah 26:19

Contrary to the strong delusion under which Jehovah’s Witnesses labor, Christ has not returned. Neither has the parousia began —nor the first resurrection. 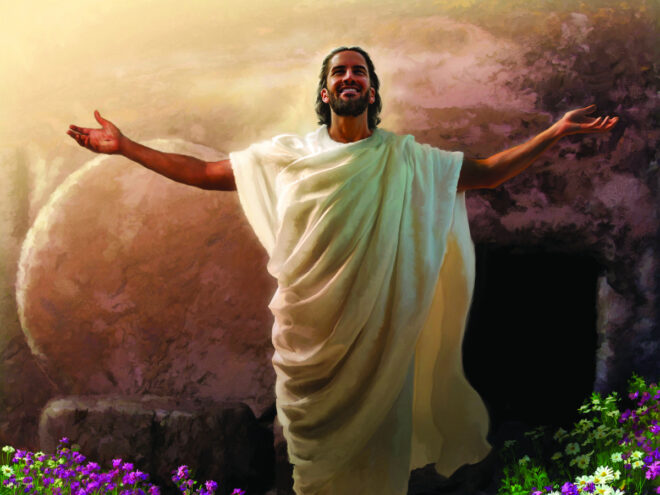 The verse above has quotation marks around it. That is because in context God is speaking. “Your dead will live” is in reference to the nation which God brings into existence, enlarging its borders (vs 15).

“My corpses” indicates that those who will live belong to God. He owns them, having purchased them with the blood of his own Son. Those who are called into the Kingdom are a special possession of God —a new creation.

Residing in the dust does not necessarily mean they are physically dead and moldering in the grave, although when the first resurrection begins most of the offspring of the woman will be sleeping in the dust. But those who endure Jehovah’s severe disciplining will be very much alive in the flesh. Their awakening is in a spiritual sense. The enlivening “dew” that refreshes them is the holy spirit. They will come alive in the fullest sense —being sealed and accepted into the everlasting Kingdom due to their belonging to Christ who imparts life into them.

It is then with the assurance of God’s ultimate salvation that Jehovah orders his people to “enter your inner rooms, and shut your doors behind you. Hide yourself for a brief moment until the wrath has passed by.”

We ought to be reminded of the original Passover when the Israelites were ordered to splash the blood of a lamb on their doorposts and stay indoors while the angel of death passed over. So it is, the coming wrath will be expressed by the great tribulation, from which the great crowd will emerge and the chosen will be sealed and the spirit poured out.