Stored Up for Fire

Stored Up for Fire

“For, according to their wish, this fact escapes their notice, that there were heavens from of old and an earth standing compactly out of water and in the midst of water by the word of God; and by those means the world of that time suffered destruction when it was deluged with water. But by the same word the heavens and the earth that are now are stored up for fire and are being reserved to the day of judgment and of destruction of the ungodly men.” – 2 Peter 3:5-7

In the beginning the earth was a formless waste, shrouded in water and gas. On the second creative day God commanded a division of the waters, so that one mass of water should cover the earth as ocean, and another mass be suspended high above the earth as a heavenly ocean – a deluge.

Scientists point out that it is impossible for the atmosphere surrounding this earth to contain nearly enough water vapor to completely inundate the planet to the extent the Bible describes. And,  of course, they are right. Unfortunately, Flood proponents have referred to the heavenly ocean as a “vapor canopy.” However, it should not be supposed that the heavenly ocean was in the form of water vapor. The Hebrew term (mabbul) translated “deluge” literally means “heavenly ocean.” And since the deluge came about as a direct creation of God neither should we imagine that the heavenly ocean came into existence by natural means, such as evaporation and condensation.

As the apostle Peter wrote (above), the world in Noah’s day stood compactly out of water and in the midst of water by the word of God. In other words, the dry ground upon which men lived was completely surrounded by waters – the waters of the seas, subterranean waters and the heavenly ocean, which Jehovah put in place. By means of erupting geysers, great tidal waves and the collapse of the suspended, heavenly ocean, Jehovah wiped a wicked world off the earth.

In the four millennia since that great catastrophe another wicked civilization has developed, influenced by the same evil angels that walked the earth before the Flood. And now the time has come for God to destroy this world and remove the demons from their invisible thrones.

To that end Peter revealed that the same word of God that once created a division between the waters, and suspended an ocean above the atmospheric expanse, has also decreed that the present heavens and earth be stored up with fire.

Since the waters of the deluge were literal, natural elements, put in place by the hand of God, is the “fire” literal too, or does it merely symbolize God’s destructive power? 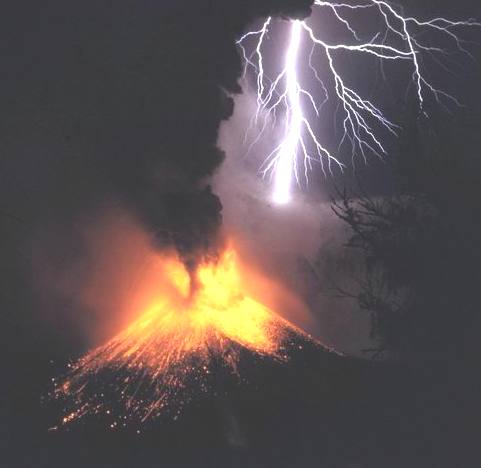 Well, consider the fact that this seemingly rock-solid, terra firma we stand upon is actually a relatively thin crust of skin floating upon a vast sea of bubbling, molten rock. Occasionally that reality is demonstrated when the subterranean fires burst through the crust in great volcanic eruptions.

Not only is there fire below the earth, the usually benevolent star that sits at the center of our local solar system is given to cycles of great fiery outbursts with the potential to affect the earth in ways that are not presently fully understood.

Literally, then, just as the word of God situated the ancient earth in the midst of water, the modern world is also surrounded by stored up fire in the earth below and heavens above. The fact that Peter’s epistle stated that this “fire” was being held in reserve would indicate that the means of destruction is already in place – “stored up,” as it were, to be at God’s disposal for that great day.

Although there is little doubt that the beast-like Anglo-American empire is being demonically driven to unleash its stored up thermonuclear fire upon certain nations of the Middle East and Asia, still, it appears as if the fiery day of Jehovah will include more than man-made fire.

Should it be considered coincidental that at this critical juncture in history, with London’s monetary empire in its last days and their long-standing policy to commit global genocide now being swiftly implemented, which, as readers of this site know is the stuff of prophecy, the sun has suddenly flared up from a 13-year period of dormancy. For example, on May the 2nd an amateur astronomer captured a mass coronal ejection that released a fireball the size of the earth hurling out into space.

(As an anecdote, when I shared this information about this giant fireball being hurled into space with my wife, who herself is also an amateur astronomer, she asked the somewhat disconcerting question: “Where’s it going?)

One day prior to the horrific earthquake that rocked Japan the sun erupted in one of the largest mass coronal ejections ever witnessed by man. It is believed by some that the interplay of cosmic radiation upon earth’s magnetic field may be involved in the movement of the earth’s great floating plates. It is noteworthy that swarms of earthquakes in greater frequency and intensity are being reported all over the planet, not just the Pacific Ring of Fire, but the New Madrid fault in the heart of the USA as well.

Also, the beautiful Yellowstone Park in Wyoming is actually the top of what is called a super-volcano. An eruption of the simmering caldera could literally blanket North America in volcanic ash and darken the sun around the entire planet. National Geographic reported at the beginning of the year that the caldera had suddenly bulged with swelling magma. Although scientists do not think an eruption is imminent they are closely monitoring it. Certainly, though, the Yellowstone caldera is an example of stored up fire.

Not entirely unrelated, but it bears consideration, it is being reported that the so-called Atlantic Conveyer has stalled. The Atlantic current comes up the Eastern seaboard from the warm Gulf waters and baths northern Europe in relatively warm water – moderating frigid weather. It is suspected that the BP oil blowout last summer and the millions of gallons of extremely toxic Corexit dispersant that were dumped into the ocean have caused the warm current to stall. This disaster is likely to change the weather in unpredictable ways. Already radical extremes of weather phenomenon are being experienced, from extreme droughts in parts of the USA, to unprecedented flooding in other parts, along with massive tornado outbreaks. Poland just had an unseasonal snowfall. Other strange and unusual things are occurring around the world, such as massive animal die-offs.

Although most people wish to dismiss Noah’s Flood as a myth, the fire stored up for the day of Jehovah that Jehovah’s Witnesses have been preaching about for decades, is not so easy to ignore.