The Parting of the Wise and Foolish Virgins

The Parting of the Wise and Foolish Virgins

Jesus’ prophecy recorded in Matthew chapters 24 and 25 contains eight references to his “coming”; in each case, a form of the same Greek word is used. In every instance, Jesus was referring to the time during the great tribulation when he will come to carry out the judging work and then the destruction of this world system of things. Evidently, then, this parable of the ten virgins applies during the last days, but its climax comes during the great tribulation.  What is the parable’s basic message? Remember the context. Jesus had just discussed his “faithful and discreet slave.”  That slave would prove to be a small group of anointed men who would take the lead among Christ’s followers during the last days. Jesus warned those men that they must remain faithful. Next, he broadened his focus and gave this parable to admonish all his anointed followers to “keep on the watch” lest they miss out on their precious reward.

The Watchtower has played a vital role in the outworking of Jehovah’s purpose up to this point. It has published far and wide the basic, biblical truth that the churches have for centuries distorted. It has trained millions of ministers to serve as illuminators in this dark world. Within the Christian Congregation of Jehovah’s Witnesses are found the two scripturally delineated groups composing the little flock and the other sheep who are to form the new heavens and the new earth.

With this great preparation now well along and the world on the verge of unimaginable chaos, what role will the Watchtower play in the future? The assumption among Jehovah’s Witnesses is that the same publishing company that has led them this far will be instrumental in the future in providing “life-saving instructions,” as one recent Watchtower intimated.

Nothing could be further from the truth. And that is what Jesus’ parable of the 10 virgins illustrates.

Being considered the sole authority on all matters spiritual —the very mouthpiece of God — the Watchtower is looked to as the source of spiritual food and by extension, illuminating oil, as it were, which the 10 virgins all use in their lamps. 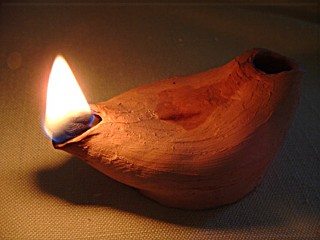 In the illustration the rousing call comes in the middle of the night: “Here is the bridegroom! Go out to meet him.” It is at that point that the foolish virgins impose upon the wise ones to share with them their oil, which they refuse to do, saying to the foolish: “Perhaps there may not be enough for both us and you. Go instead to those who sell it, and buy some for yourselves.”

In other words, at the point of the bridegroom’s arrival there is nothing that any anointed individual can do to impart enlightenment to another. Then their success or failure will be determined by what they had done prior to the “announcement.” Indeed, it is at that point that a parting of the ways will occur. That separation is the commonality to virtually all of Jesus’ parables. For example, regarding his parousia Jesus said: “Then two men will be in the field; one will be taken along and the other abandoned. Two women will be grinding at the hand mill; one will be taken along and the other abandoned. Keep on the watch, therefore, because you do not know on what day your Lord is coming.”

Regarding the Watchtower’s explanation of the parable of the wise and foolish virgins, even after their most recent revision, supposedly the call: ‘Here is the bridegroom, go out to meet him,’ came in the middle of the night back in 1914. That means over the past century successive generations of anointed virgins have gone out to meet the bridegroom and yet not one of them —neither the wise nor the foolish —have experienced the moment when the bridegroom came!

The kindest thing that can be said about the Watchtower’s interpretation is that it doesn’t make any sense.

But what does make sense and is in complete harmony with the sacred secrets of God, is that the second coming of Christ will occur outside the authority of the Watchtower. Furthermore, Jesus has not in any respect already come; not in 1914, 1918 or any time since.

Because Jehovah’s Witnesses have been led to believe otherwise, the call to go meet the bridegroom will come as a startling shock. But it will be undeniable since it will take place against the backdrop of the sign which Jesus foretold will immediately precede his arrival; namely, nation rising against nation in warfare, food shortages, deadly pandemics and great earthquakes. 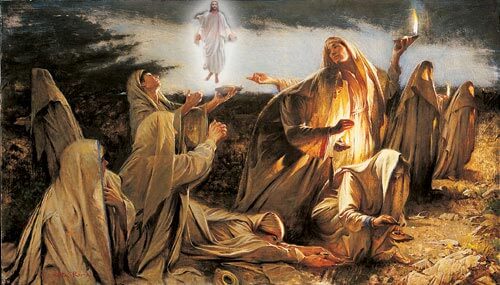 Of course, the Watchtower insists that all of these things have already been in evidence since 1914 and that it is not possible for future events to fulfill the things Jesus foretold more convincingly then what has already occurred. But obviously there can be another world war. There can be global pandemics that even dwarf the horrors of the Spanish Flu in 1919. Needless to say there can be widespread food shortages due to global economic collapse, even as is developing in Venezuela at this moment.

Having determinedly promoted a false coming of Christ for its entire existence, what credibility could the Watchtower possibly retain in the face of the unexpected arrival of the bridegroom? The sellers of oil will be completely out of stock then! That is why only those virgins who have their own spiritual reserve will be able to navigate through the darkness to the secret rendezvous with the bridegroom. Whereas, those who then foolishly look to the Watchtower to provide them with spiritual illumination will find themselves on the outside when the door to the wedding feast is shut. Though they may stand and knock the door will not be opened to them.