Is the Bridegroom Here?

Is the Bridegroom Here?

This article is categorized under Watchtower Review

“Right in the middle of the night there was a shout: ‘Here is the bridegroom! Go out to meet him.’ Then all those virgins got up and put their lamps in order.”

The leading study article of the March 2015, Watchtower relates the instance when Jesus became overjoyed because his Father had revealed the identity and work of the Messiah to them and had empowered them to carry on the work, while hiding matters from the wise and intellectual ones of the Jewish system.

The article implies that Jehovah’s Witnesses have been similarly blessed to have had the deep things revealed to them through the agency of the Watchtower.

While it is true that God revealed many sacred secrets to the disciples of Jesus, it was also God’s will to conceal certain vital matters from them, at least for a time; namely, the fact that Jesus was going to be taken from them.

Although Jesus spoke straightforwardly to them about his destiny they could not understand what God had concealed. The ninth chapter of Luke records Jesus’ words: “‘Listen carefully and remember these words, for the Son of man is going to be betrayed into men’s hands.’ But they did not understand what he was saying. In fact, it was concealed from them so that they might not grasp it, and they were afraid to question him about this saying.”

Interestingly, although the matter was concealed from them, presumably by Jehovah himself, the verse above indicates that it was the apostles’ own fearfulness that prevented them from seeking clarification on a matter they could not grasp. Had they done so Jesus would have surely enlightened them.

After Jesus was resurrected, though, he appeared in various guises to small groups of his disciples. On one occasion the materialized Christ rebuked his disciples for being senseless and slow in heart to believe all the things the prophets spoke regarding the Messiah.

The short period of time Jesus walked among his disciples before his ascension is a fore gleam of the parousia, when Jesus will come alongside them as their minister. After all, Jesus said he would be with his followers all the days until the conclusion of the system, so his coming alongside them during the concluding phase is something extraordinary. And not to be overlooked, the Greek term “parousia” literally means “to come alongside.”

These matters have been directly put before the leadership of Jehovah’s Witnesses and the worldwide web in various articles on e-Watchman, such as Parousia and Who Is Blind?

In case there is any ambiguity as to whether the case of the apostles being unable to grasp certain matters is a pattern, the 57th chapter of Isaiah directs God’s rebuke to the future revelation of Christ, when God addresses certain men living then, saying to them: “Whom did you become frightened at and begin to fear, so that you took up lying? But I was not the one that you remembered. You took nothing to your heart. Was I not keeping silent and hiding matters?”

With the above in mind the senselessness and slowness to accept the deep things of prophecy on the part of the leading men of the Watchtower is on full display in the article entitled: Will You Keep on the Watch?

After explaining the obvious counterpart of the bridegroom in the parable of the wise and foolish virgins the fifth paragraph goes on to state:

Next, consider the time frame. To what time period did Jesus’ counsel apply? Jesus supplies us with a clear time indicator toward the end of the parable: “The bridegroom came.” As was discussed in the July 15, 2013, issue of this journal, Jesus’ prophecy recorded in Matthew chapters 24 and 25 contains eight references to his “coming”; in each case, a form of the same Greek word is used. In every instance, Jesus was referring to the time during the great tribulation when he will come to carry out the judging work and then the destruction of this world system of things. Evidently, then, this parable applies during the last days, but its climax comes during the great tribulation.

Contrary to the Watchtower’s assertion Jesus’ coming is not in connection with the tribulation. Jesus first comes to initiate the judgment of the house of God, in other words, to judge those who have been recognized by him as his slaves. Of course, Jehovah’s Witnesses have been deluded into imagining that this has already taken place.

The July 15, 2013, Watchtower, cited above, has been thoroughly dissected and repudiated in an eight-part series of articles appearing in the Watchtower Review section. Part six specifically deals with the coming of Christ.

Now consider what is stated in the latter half of the ninth paragraph.

In the parable, all the virgins responded to the nighttime shout: “Here is the bridegroom!” But only the vigilant ones endured to the end. What about faithful anointed ones today? Throughout the last days, they have responded to strong evidence that, in effect, cries out, “Here is the bridegroom”—just about to come. They have also endured, keeping ever ready for the Bridegroom to arrive. However, the climax of the parable focuses on a more specific period of time. How so?

Jesus’ story is very simple. The waiting virgins all hear the shout in the middle of the night: “Here is the bridegroom! Go out to meet him.” That is it. One shout, to which they all respond, albeit in two different ways. 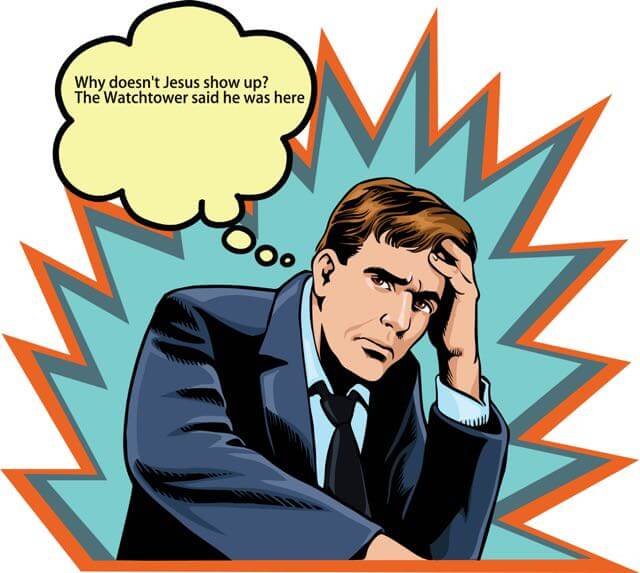 But because the Watchtower is inseparably attached to 1914 as the time when the bridegroom supposedly arrived they are compelled to concoct an absolutely preposterous scenario that has multiple generations of anointed persons hearing the shout in the middle of the night repeated over and over and over again, supposedly in the form of “evidence,” which the Watchtower itself admits is not yet fully displayed, and indisputably, the bridegroom is a consistent no-show.

In the Watchtower’s scenario the original “virgins” who heard the proclamation that “the bridegroom is here!” responded and went out to meet him, but he never showed up. In fact, all those symbolic virgins associated with the Bible Students died off waiting for the bridegroom after they were supposedly roused from slumber by the shout in the middle of the night. It didn’t matter if they were wise or foolish, or if they had an inexhaustible supply of oil in their spiritual lamps – they still died waiting for the bridegroom, after they had been told he was here! True, they may have endured to the end, but it was not the end of the system as Jesus used the expression, but the end of their lives.

Another generation of wise and foolish virgins follows and they presumably hear the reverberating announcement that “the bridegroom is here! Go out to meet him.” They also responsively go out into the darkness to meet him with their lamps aglow. Again, he doesn’t show. Like their predecessors, they all die off wandering in the gloom waiting for the bridegroom to meet them – both the wise and the foolish, there is no distinction.

Now, yet another generation of presumptive wise and foolish virgins comes on the world stage. They too are told, ad nauseam, ‘the bridegroom is here and has been here for 100 years!’ No wonder they all nod off from sheer fatigue.

Obviously, the bridegroom is not here. That is why all those who have figuratively gone out to meet him have been repeatedly disappointed. Ironically, that makes the Watchtower’s question all the more pertinent: Will you keep on the watch?

“Woe to those who are going very deep in concealing counsel from Jehovah himself, and whose deeds have occurred in a dark place, while they say: “Who is seeing us, and who is knowing of us?”