When Christopher Columbus returned to his native land with the news of his discovery Europeans immediately began to refer to it as “the New World.” For the past half millennia the Americas have been called the New World. For desperate millions the New World offered the hope of a fresh start, free from the grinding poverty and oppression of the remnants of a feudalistic system in Europe, that at the time of Columbus’s discovery still had not fully recovered from the ravages of the Black Death, famine and the so-called Hundred Year’s War, which combined, had reduced the population in some parts of the Old World by as much as two-thirds.

But, alas, the New World is just a name. Surely it is understood that the term “new world” is merely in reference to a land mass and not a new society. In spite of the lofty hopes and aspirations of the pioneers and immigrants along with their descendants, who,  over the past five centuries have peopled the Western Hemisphere’s continental New World, the Americas are burdened with the very same problems that have long plagued the Old World.

Now at this stage of affairs the untreated disease that has for so long afflicted society has reached the point that the entire global civilization faces an early collapse into a new dark age. (YouTube) Never before in history has the need for a new world, that is to say – a new society – been so urgent as at this present time.

Since Adam and Eve came under his authority Satan the Devil has exerted tremendous influence over mankind. Jesus fingered the Devil as a manslayer and the father of the lie. No wonder the world under his evil spell is murderous and full of liars and con men. Satan must be removed if there is ever going to be a genuine new world.

What mankind desperately needs is a righteous ruler to replace the Devil and his degenerate demons. And that is exactly what God has provided in the person of Jesus Christ and those 144,000 who will rule with him in his kingdom, which is why Jesus himself teaches his followers to pray: “Let your kingdom come.” 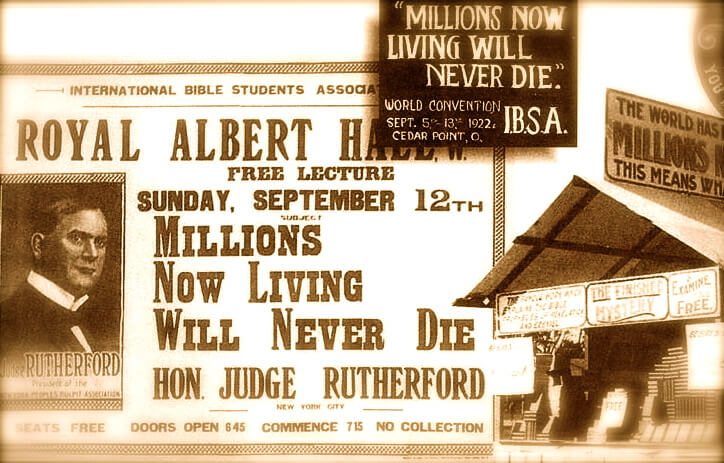 It was in the aftermath of the most intense calamity that had ever befallen the world prior to then, that J.F. Rutherford initiated a far-reaching preaching campaign that heralded the bold proclamation: “Millions now living will never die.” (Read online)

Despite Rutherford’s penchant for Barnum and Bailey theatrics and his ill-conceived chronology, the Watchtower’s advertising slogan actually revived the long-lost message of the sacred Scriptures; namely, the God-given hope of a new world.

Although that post-WWI generation has in fact died off, and Rutherford’s embarrassing 1925 belly flop notwithstanding (Rutherford later admitted: “I made an ass of myself”), the hope of a new world in the hearts and minds of millions of Jehovah’s Witnesses has not diminished.

Indeed, in the aftermath of the colossal calamity known as World War Two the Watchtower introduced the phrase “the new world.” Thus, the New World Society came into focus, as Jehovah’s Witnesses are alternatively called; and at the same time the Watchtower Society commissioned the production of the New World Translation of the Holy Scriptures. (The Watchtower also frequently used the terms “new order” and “new world order,” but as that terminology has become increasingly associated with the conspiratorial new world order, in 1986 the Watchtower wisely dropped those phrases from its theocratic lexicon.)

But what is the biblical basis for the new world hope?

Actually, there has already been one new world since creation. At least an old world was destroyed and society began anew when Jehovah caused a global deluge to swept away an ancient world. Eight human souls survived to re-populate the earth, freed from the malevolent Nephilim and their lustful fathers from heaven.

In the third chapter of his second letter the apostle Peter referred to that calamity, comparing it to the coming fiery catastrophe that will incinerate the present civilization during the period designated in Scripture as the day of Jehovah. But the apostle put forward the hope of survival into a new heavens and new earth. In the book of Revelation Jesus also spoke of the passing of an old heaven and an old earth and the creation of a new heaven and a new earth. (When on earth Jesus also spoke of ‘the system to come’ and “the regeneration.”)

Of course, God did not create a new planet in the days of Noah. He merely swept away a corrupt civilization and gave mankind a fresh start. The new heaven and new earth have to do with God replacing the present corrupt system. There is nothing wrong with the beautiful globe that orbits the sun that Jehovah has created that cannot be remedied by the removal of the present demonic system of things. The old heaven that will be dissolved is symbolic of the Devil’s heavenly throne over mankind. The old earth is the present civilization under Satan’s domination. The new heaven is God’s kingdom of 144,001 that will replace Satan and the demons as rulers. The new earth will be a righteous new society, initially composed entirely of the survivors of the world-ending war of Armageddon, and later joined by the masses of mankind who will be brought back from the dead to live on earth once again.

Although the chosen few will have to die to receive their heavenly thrones the unnumbered great crowd of people who are destined to come out of the great tribulation will have the unspeakable privilege of being the first people who have ever lived who will never die.

Although the Watchtower’s “millions now living” campaign has to this day been held up to scorn and ridicule, the fact is, Rutherford was just ahead of his time. As this present system careens towards its inevitable crash it may confidently be stated that millions now living will never die. The new world of Jehovah’s promise lies just beyond the pall of the mushroom clouds certain to envelop this evil world in the near future.