The Watchtower’s Legal Department has been fighting for quite a few years to keep their records private. Although they exhort Jehovah’s Witnesses to obey the superior authorities – as the apostle Paul called them – as long as their laws and edicts do not contravene God’s laws, the leadership of Jehovah’s Witnesses apparently consider the Watchtower to be superior to the superior authorities. Now though they are going to have to start paying for the privilege.

A San Diego Superior Court judge has ordered the Church of Jehovah’s Witnesses, also known as the Watchtower Bible and Tract Society of Pennsylvania, to pay $4000 a day for every day that it fails to produce documents requested in a civil lawsuit brought by former parishioner, Osbaldo Padron, who claims a church elder sexually abused him when he was seven years old.

In a June 23 ruling, expected to be made final today, judge Richard Strauss admonished the church for willfully ignoring a court order to produce all documents associated with a 1997 Body of Elders letter that church leaders sent to parishes around the world in a quest to learn about sexual abuse of children by church leaders.

Over the course of the past year, the Watchtower Society and its lawyers have fought hard to keep the letter confidential, claiming that turning over the documents would infringe on the privacy of those mentioned in the letter that were not associated with the case.

In March 2015, the church turned over a heavily redacted version of the letter. Opposing attorneys called the redactions excessive, rendering the document illegible. Judge Strauss then assigned a discovery referee to sit with the two sides. But having a referee involved didn’t solve matters. Repeatedly, the Watchtower Society has stated that it will not comply with the order.

“By the time of the hearing on the motion for sanctions, it will have been over a year since the initial order and almost three months since the

[referee’s recommendation] was adopted,” reads Strauss’s ruling. “In the period since…Watchtower has shown no effort or willingness to comply with the discovery order.

“Based upon the history in this case and Watchtower’s statements…the court finds that Watchtower’s failure to comply is willful…Watchtower clearly has control over the documents it has already produced and could revise the redactions with regard to those documents. This is obviously and clearly within the scope of Watchtower’s powers which it chooses not to exercise. Continuing to repeat its prior unsuccessful arguments in opposition to the discovery order further illustrates Watchtower’s obstinacy in compliance.”

In 2014 a San Diego Superior Court judge awarded 37-year-old José Lopez $13.5 million for damages as a result of sexual abuse he suffered at the hands of longtime church member Gonzalo Campos. In that case the judge found that church headquarters was aware of sexual abuse by church leaders and had tried to cover up the abuse. The church is in the process of appealing the decision.

The case was one of several against Campos. 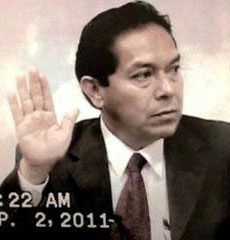 Padron filed his lawsuit in 2013. In his lawsuit, Padron claims that the church was aware of Campos’s abuse, dating as far back as 1982 when his 12-year-old roommate accused the then-18-year-old Campos of trying to have sex with him. The abuse, claims Padron and others, continued; and, during that time church leaders at the Playa Pacific Spanish Congregation in Linda Vista continued to give Campos more of a leadership role in the congregation.

From 1987 to 1994, Campos was accused of numerous assaults. In 1994 a parent of one of Campos’s alleged victims wrote a letter to the congregation and church headquarters requesting an investigation. The letter did little. That same year was when the abuse began for Padron. According to his 2013 complaint, Campos molested Padron on numerous occasions from 1994 to 1995.

Two years later, the church sent their Body of Elders letter to congregations worldwide. The contents of the letter have never been made public, and it is unclear whether Campos was one of the members accused of sexually assaulting children.

Now, with Strauss’s ruling, it appears that the church may be forced to change its tack. A civil trial is scheduled for August 19.

Padron’s attorneys did not respond to requests for comment.