In the time of the end…a pushing

In the time of the end…a pushing

In the aftermath of the Second World War the British Empire immediately went to work to destroy the alliance between the United States and Russia that had formed as a result of the Nazi invasion of the USSR; hence, Winston Churchill, the former British prime minister, came to Fulton Missouri in 1946 and proclaimed the Iron Curtain had fallen on half of Europe. No sooner had the shooting stopped a new war began —the Cold War. The so-called Cold War shaped the baby boom generation and provided the impetus for the further development and proliferation of the most powerful and fiendish weapons ever devised.

During that time the military-industrial complex took shape. Ominously, the outgoing president in 1960, Eisenhower, warned the nation in his farewell speech —not of the Red Menace —but of the expansion of the power of what he called the military-industrial complex (MIC). Indeed, Ike was right. In the 60 years since then, the menace has grown into a monster that threatens the human race with extinction.

What Eisenhower did not explain, though, is that what has come to be known as the deep state and the military-industrial complex is an appendage of the virtually invisible British Empire. How did that come about?

After Abraham Lincoln defeated the London-backed Confederacy and preserved the union of the United States London hatched a scheme of subverting the United States from within —not that it had not tried that before — see Aaron Burr.

Toward the end of the 19th century, various semi-secret societies sprouted —the Fabian Society, formed in 1884, being one of the foremost. The goal of the Fabian Society was and still is the promotion of socialism, not through Bolshevik-style revolution, but through gradual conditioning. The Fabians appropriately adopted the plodding tortoise as their logo. 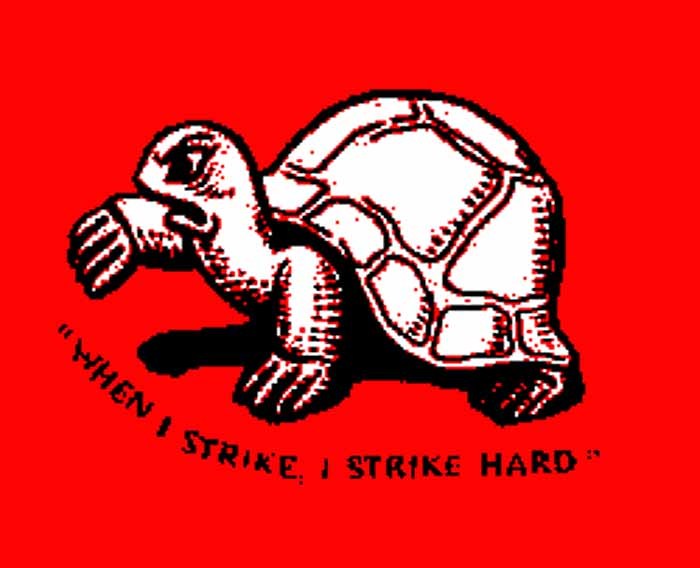 In response to the post-Civil War success of the American System of Economy, in 1895 the Fabians established the London School of Economics to train future generations —not in nation-building, but in monetary alchemy.

The money men succeeded in killing off any tendency to create another United States national bank in 1913 by stealthily making the privately-owned Federal Reserve Bank the official bank of the federal government. As it stands now, the so-called FED has flooded the world with money, fueling the most reckless speculative binge in history. Now the globalists have signaled their intention to implement what is called the great reset, which appears to be nothing short of global communism.

Given the inexorable rise of socialism in America the Fabian conditioning has apparently succeeded. And given President Trump’s adamant opposition to it, as well as his opposition to the Green New Deal which is key to the so-called reset, it is understandable why the British have orchestrated an ongoing coup against him, culminating in the most egregious election fraud in history.

The aforementioned military-industrial complex came under the control of the empire in another way. Through the influence of the Council on Foreign Relations (CFR), set up after WWI as a sister organization to London’s Chatham House, over the ensuing decades politicians, media, and educators and influential men and women in business, have been conditioned to reject nationalism and adopt globalism —aka imperialism. To borrow a line from Infowars, ‘there is a war for your mind.’ And London has been winning the war.

By the turn of the millennium, Anglo-American intelligence agencies have become virtually indistinguishable –joined at the hip, as it were. The subversion has been complete. Hence, when the Anglo-allied Saudi terrorists attacked on 9-11 America was unleashed upon the Middle East as London’s dumb giant.

Virtually all American presidents have to be vetted by the CFR. Apparently, they did not think Donald Trump had a chance of becoming president in 2016, but to their horror, even the FBI’s insurance policy failed to take him down and the brash president made a good faith effort to curtail the forever wars that are central to the empire’s grand scheme for world domination.

What does this have to do with the ongoing conflict between the kings of the north and south? According to Daniel, the conflict will come to a head during the time of the end. Here is what the prophet wrote: “In the time of the end the king of the south will engage with him in a pushing, and against him the king of the north will storm with chariots and horsemen and many ships; and he will enter into the lands and sweep through like a flood.”

Contrary to the Watchtower’s oft-repeated claim that the time of the end began in 1914, there is no chronology that reveals the day and hour for the beginning of the end. If the Watchtower’s interpretation is true —if Germany was the king of the north when WWI began —then the “pushing” would have preceded that war and the flooding storm would have been on the part of Germany. But alas, Germany and the Austro-Hungarian alliance was defeated in the war. Not to be deterred by the facts of history or even common sense, the Watchtower claims the pushing began anew during the Cold War —this time under the guise of the USSR.

True, the Soviet Union seemed to swell up like an unstoppable flood, inundating half of Europe. But, alas, the USSR unceremoniously collapsed and all the nations that had been enveloped in communism became free.

But the seers of Bethel are persistent. A few years ago the Governing Body announced that Russia is the new king of the north and he is using cyberwar to push the Anglo-American king of the south. Embarrassingly, the Watchtower partially bases their new light on the demonstrably fake news propaganda that Russia hacked the DNC in order to help Trump get elected.

Incredibly, according to the Watchtower, the “pushing” has been going on for over a century and has been carried out by no less than three entities that Jehovah’s Witnesses are required to believe have been in the role of the prophetic king of the north.

Meanwhile, as of January 8, 2021, amid conflicting reports that Trump has conceded, it is reported among the conspiracy theorists that the president has vacated the Whitehouse and is in a military command and control center. If true, evidently Trump is not going to concede. He is pushing back! It looks as though the military option may come into play against the traitors, seditionists, and coup plotters. That is why the opposition and their media mascots are clamoring for Trump to be removed from office now, not two weeks from now when the new president is scheduled to be sworn in —now!

If Trump brings the special forces and marines against the deep state, their lackeys and dupes, ultimately against the empire that controls them, the response will surely be an overwhelming flood of violence —civil war, financial collapse, and all-out war!

Then we will know for certain that the time of the end has begun. And from that point on everything will change.