He learned obedience from the things he suffered

He learned obedience from the things he suffered

God can be anything or anyone he chooses. Although, apparently, Almighty God has a few limitations. Foremost, it is impossible for God to lie. Think of that. God cannot act unjustly. He simply cannot be untrue or hypocritical.

By nature, God is loving and kind. So are people, for the most part. At least we are inclined that way. That is because in the beginning God created man in his image— imbued with his character and qualities.

God is not some faraway deity who floats around the universe casting his seed and leaving things to turn out as they will as he casually watches from afar. God is purposeful. He has always been keenly interested in the goings-on down here on this troubled little sphere.

As we know, originally God intended for Adam and Eve to live forever and ever in a paradise of pleasure. It seems so ridiculously simple, but all those two original humans had to do to have everything anyone could ever desire was not eat a particular fruit. Of course, the issue was not about fruit.

When God purposed to become a Creator, yes, when he decided to father creatures with whom he could relate and be someone with whom his children could interact, he made a very clear distinction between himself and those whom he fathered. God was/is an absolute Authoritarian.

The children of God could only enjoy true freedom by submitting to His authority. His children, whether spirit sons of God or those made of dust, are all under obligation to obey him. It is not a hard concept to comprehend. What parent does not require at least some level of obedience from their child? With God obedience is not and has never been optional. God used the illustration to explain his position. He is the Potter. We are the clay. The clay has no say in how the potter fashions the lump. Sounds reasonable to me.

Obeying God is the whole issue. A certain angel said it was not necessary to obey God. He was lying. He’s still lying. Other angels became disobedient in the days before Noah’s flood. No wonder the world is a mess.

All of God’s dealings with humans have always depended upon obedience. God commanded Noah to build an ark. Noah did just so. God commanded Abraham to offer him his son. Abraham raised the knife. Jehovah commanded Moses to go to Egypt and confront Pharaoh. He did.

The sterling example of obedience came from Jehovah’s only-begotten Son. The scripture says he learned obedience from the things he suffered. That does not imply that Jesus was at any time disobedient. No, Jesus told the Jews that he always did the things pleasing to his Father. But before the Firstborn son came to earth he lived in supreme comfort and security. Obeying was easy. No problem. He was, after all, Jehovah’s most favored. He had everything. Because God willed it, he left it all behind.

We cannot imagine the magnitude of the step down for him— divesting himself of divinity and becoming human. Maybe the only comparison we could relate to would be like if some very important person agreed to leave their mansion and their family and become a dog, or some other lesser creature— if that were possible.

Even as a human, though, Jesus could have taken the easy road. Hey, how many men would turn down the offer to be king of the world, to have all the wealth, women, armies at his command, all the stuff that monarchs enjoy? That is what Satan offered Jesus. And the Devil could have delivered. Thankfully, Jesus rejected the temptation.

Instead, Jesus chose to be homeless. Although he created the world he had no worldly possessions. He had no women. His only comfort was doing his Father’s will. He traveled up and down the dusty roads of Israel teaching whoever would listen. He healed the sick, fed the hungry and expelled the demons from those whom they held in bondage.

Imagine the feeling of knowing the kind of unpleasant and excruciating death you would die. And the exact day when you would have to submit to it. Jesus did not die in bed surrounded by family and friends. He was mocked, beaten and stripped naked and nailed to a pole.

He could have avoided suffering such a horrible fate. On the night it all went down, as the mob came for him with torches, clubs and swords, with the fate of the world weighing on his shoulders, Jesus literally started sweating blood. He fell down face first on the ground and said: “My Father, if it is possible, let this cup pass away from me. Yet, not as I will, but as you will.”

God had already staked his reputation on Jesus’ submission to his will. So, no, it was not possible for Jesus to avoid his fate. It was unthinkable that he would allow his Father to suffer reproach for his refusal to submit. Jesus knew the Father’s will. It was written in the prophets. Jesus rose up and surrendered himself to the mob, determined to face his death in order to obey God to the end.

Isaiah said that Jehovah took delight in crushing him. Of course, God did not do any such thing. What the prophecy means, is that God was delighted that Jesus obeyed to the death because that settles the issue that Satan had instigated.

Because of what Jesus did– submitting to the Father’s will without reservation, Jehovah has placed Jesus as the ultimate authority. Now, all must obey Jesus as Lord— just as if he were Almighty God. Paul explained it this way: “During his life on earth, Christ offered up supplications and also petitions, with strong outcries and tears, to the One who was able to save him out of death, and he was favorably heard for his godly fear. Although he was a son, he learned obedience from the things he suffered. And after he had been made perfect, he became responsible for everlasting salvation to all those obeying him, because he has been designated by God a high priest in the manner of Melchizedek.” — Hebrews 5:7-10

Soon, though, will come the hour of test. Jesus warned it is coming upon the entire world.

We have a little glimpse of it now.

Over the span of a few weeks nation after nation has imposed a lockdown. As it stands presently, Jehovah’s Witnesses have been more impacted than most. Besides the fact that many individuals— like everyone else— have been put out of work and are losing income, Jehovah’s Witnesses have been ordered by the Governing Body not to carry on the work that Christ commanded. The worldwide work that has been sponsored by the Watchtower has suddenly come to a virtual standstill. What a shame too, because now millions of people are at home and many might be in a receptive frame of mind to the message contained in the Bible.

This is an extraordinary, unprecedented development. Moreover, due to the social distancing guidelines Jehovah’s Witnesses no longer even meet together as congregations.

It is good to be reasonable, though. Jehovah’s Witnesses would not want to be instrumental in spreading the contagion. But at what point will the issue of obedience to Christ’s command have to become paramount?

It is understandable why Jehovah’s Witnesses are imagining that Armageddon is near. Of course, it is. But first must come the hour of test. And as you might guess it will have to do with obedience.

With the sudden collapsing of the economies of nations, it doesn’t take a great deal of imagination to foresee the end of freedom and democracy. Nations are being bankrupted trying to bail out the phony debt imposed upon them by the City of London and Wall Street.

Jesus prepared his disciples for the hour of test. He explained the secret of being obedient even when it seems as if obeying God is too hard. Jesus said: “Moreover, I say to you, my friends, do not fear those who kill the body and after this are not able to do anything more. But I will show you whom to fear: Fear the One who after killing has authority to throw into Gehenna. Yes, I tell you, fear this One. Five sparrows sell for two coins of small value, do they not? Yet not one of them is forgotten by God. But even the hairs of your head are all numbered. Have no fear; you are worth more than many sparrows.” — Luke 12:4-7

Fear of God is good. It means we will fear to disobey him. For those who are anointed, death is unavoidable. Jesus is the way to God. And there is only one way to God— through death. Those baptized into Christ are also baptized into his death. As Jesus pointed out though, death can have two outcomes. It can be temporary. Or it can be permanent. We determine which it will be.

People are fearful. They are afraid of getting the virus. They are worried over their personal finances– anxious over the health and welfare of their families. Unfortunately, it is only going to become more intense. Jesus foretold that during the darkest hour men will become faint with fear and trepidation over the terrible things coming upon the world.

On the very night of his arrest, Jesus comforted and strengthened his apostles. His words to them ought to be even more encouraging to us now. Jesus said: “In the world you will have tribulation, but take courage! I have conquered the world.”

While the ants are fighting it out down here on the anthill, meanwhile, care to go for a spin?

An astronomer surveying data from roughly 200,000 galaxies claims to have found a veritable needle in the universal haystack – a pattern underlying ...

The United States of America will be designating ANTIFA as a Terrorist Organization.

All in all, it's just another brick in the wall, or through the window as the case may be

The financial system blew out last September. 10's of billions of repo turned into 100's and then trillions. But Wall Street and the banks were saved. Then the lockdown destroyed main street. Now come the anarchists 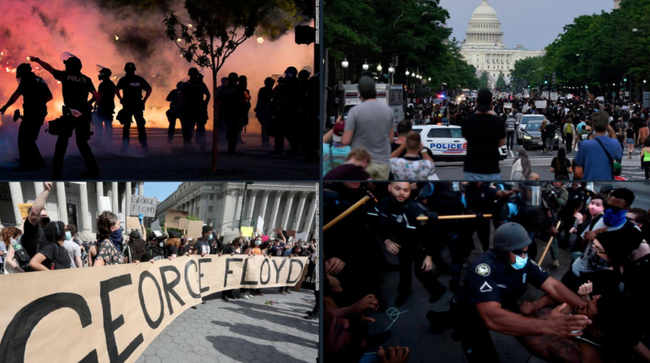 "This is absolutely no longer about George Floyd or addressing inequities anymore. This is an organized attack designed to destabilize civil society.....