A continuation of the Jeremiah series.

The 23rd chapter of Jeremiah established the fact that the denunciations against the wayward shepherds is actually earmarked for the final part of the days. That means that the negligent shepherds are appointed Christian overseers.

In the 24th chapter, Jehovah causes Jeremiah to see two baskets of figs set before the temple. One basket of fruit was good. The other basket was full of uneatable figs. What was the point of the illustration? Jehovah went on to explain: “Like these good figs, so I will regard in a good way the exiles of Judah, whom I have sent away from this place to the land of the Chaldeans. I will keep my eye on them for their good, and I will cause them to return to this land. I will build them up, and I will not tear down; I will plant them, and I will not uproot. And I will give them a heart to know me, that I am Jehovah. They will become my people, and I will become their God, for they will return to me with all their heart.” (5-7)

Some of those exiles are well known to us. Ezekiel was one. So were Daniel and his three companions. And then there was Haggai and Zechariah, Mordecai and Esther—the queen of Persia.

God did indeed bring the exiles back to their homeland and build them up. But in what sense did they become God’s people? Were not they already God’s people before they were sent into exile? And in what sense were the repatriated Jews given a new heart? Did not the majority of the repatriated Jewish nation reject Jesus and refuse to acknowledge that he was the promised Messiah? Same old faithless hearts.

Since the previous chapter of Jeremiah had established that the prophecy applies to the final part of the days the illustration of the good and bad figs must be understood in that context as well. Did not Jesus speak many parables illustrating the very same thing? Jesus spoke of the wheat and the weeds; also, the good and bad fishes. Two women and two men side-by-side and one is taken

and the other left behind. Jesus spoke of a faithful and discreet slave and an evil slave. He spoke of wise virgins and foolish virgins, of sheep and goats. It is evident that Jesus was expanding upon his Father’s illustration to Jeremiah.

The expression “they will become my people, and I will become their God” is found elsewhere in prophecy. Most notably in the 21st chapter of Revelation, where Jehovah says of the survivors of Armageddon: “Look! The tent of God is with mankind, and he will reside with them, and they will be his people. And God himself will be with them.”

But also the prophecy of Ezekiel, which even the Watchtower recognizes applies to the final part of the days. “I will give you a new heart and put a new spirit inside you. I will remove the heart of stone from your body and give you a heart of flesh. I

will put my spirit inside you, and I will cause you to walk in my regulations, and you will observe and carry out my judicial decisions. Then you will dwell in the land that I gave to your forefathers, and you will be my people and I will be your God.” — Ezekiel 36:26-28

Foremost, the symbolism of being given a new heart applies to those who have been called into the Kingdom, but who at the time of their inspection are found

wanting; hence, a refining is required—a purging by fire! And a new heart will be given to them at that time.

What about the basket of bad figs? The fact that both baskets of figs were set before the temple symbolizes that both the good and bad originate with the same people—from the Jews—really, from the same religious system. But, again, since the illustration applies to the final part of the days by extension it represents those of the so-called temple class—that is to say, anointed Christians. Regarding them, Jesus said: “Then two men will be in 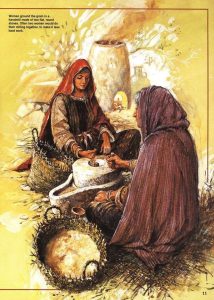 Returning to the 24th chapter of Jeremiah: “But concerning the bad figs that are so bad they cannot be eaten, this is what Jehovah says: “So I will regard King Zedekiah of Judah, his princes, the remnant of Jerusalem who are left in this land, and those who are dwelling in the land of Egypt. I will make them an object of horror and calamity to all the kingdoms of the earth, a reproach, a proverbial saying, a cause for ridicule, and a curse in all the places to which I disperse them. And I will send against them the sword, the famine, and the pestilence, until they have perished from the land that I gave to them and to their forefathers.””

When Christianity began Jehovah performed countless miracles through Jesus and through Jesus’ apostles. One miracle performed by Peter was horrific. Peter 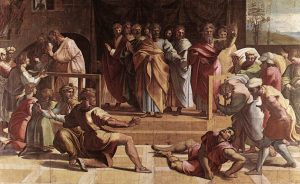 presided over the execution of a newly anointed husband and wife, Ananias and Sapphira by name. According to Peter, they had allowed Satan the Devil to embolden them to play false to the holy spirit. And God immediately punished them with death.

The congregation was stunned and fear gripped them all. Other than the execution of Herod it is the only time in the Christian Era when God directly put someone to death—and anointed Christians at that!

For sure it was a powerful portent. It not only demonstrated that God had transferred His kingdom from Israel to Christ’s followers, but that all Christians were standing before the invisible judgment throne. Furthermore, it was

portentous of the fact that Jehovah will ultimately sit in judgment of all those whom he has called when the Kingdom comes. And judgment starts with the house of God. That is the first order of business when Jesus returns.

The bad figs represent those who will be rejected and locked out of the Kingdom, where they will be made to weep and gnash their teeth in the darkness descending upon Satan’s doomed world.

That Jehovah entered into judgment with the Jews with the sword, famine and pestilence is no inconsequential detail. That sequence of calamities is mentioned many times in Jeremiah and Ezekiel. It is also the same order of events that 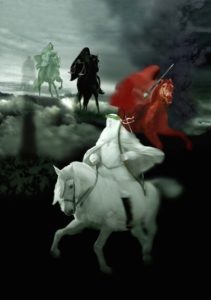 Jesus said would signal the beginning of the conclusion and his parousia. And of course, the opening of the seals of the scroll in Revelation follows the same sequence.

The basket of rotten figs symbolizes those false teachers whom Jude said are like “rocks hidden below water at your love feasts while they feast with you, shepherds who feed themselves without fear; waterless clouds carried here and there by the wind; fruitless trees in late autumn, having died twice and having been uprooted; wild waves of the sea that cast up the foam of their own shame; stars with no set course, for which the blackest darkness stands reserved forever.”