Facing the End of the Watchtower

Facing the End of the Watchtower

This essay is a brief review of the Watchtower article entitled: “Facing the End of This Old World Together.”

On what basis do Jehovah’s Witnesses believe that we are facing the end of this old world?

According to the Watchtower the great tribulation is imminent. And it is stated repeatedly that the tribulation will commence when the United Nations suddenly turns upon the iniquitous harlot of Babylon.

That being the case, what evidence is there to indicate that the UN is inclined to eradicate religion globally? Obviously, the Watchtower offers none.

Paragraph 12 intimates that the attack of the prophetic Gog of Magog is also imminent. But what developments in the world might indicate that such an attack is forthcoming? Again, the Watchtower offers nothing to back up their assertion.

In paragraph 10 the Watchtower states that “one of the darkest periods in human history nears.”

Again, thinking persons might ask why they ought to believe that to be true. Of course, the Watchtower does not offer any explanation for their statement.

Ironically, though, a growing number of people are becoming aware of the great peril civilization is facing. Over the recent months a chorus of politicians, statesmen and journalists have raised the alarm concerning the growing danger of an all-out war between Russia and the nations of NATO over the crisis in Ukraine – a war that poses the potential to quickly escalate into a nuclear conflagration.

Other voices warn of the coming collapse of the London/Wall Street financial system, which has now entered into a terminal phase characterized by the central banks offering negative interest rates.

Since these developments are more or less common knowledge, why doesn’t the Watchtower point to this precarious state of affairs as evidence this old world is headed for an unprecedented disaster?

The reason is because the leadership of Jehovah’s Witnesses are living in what might best be described as the twilight zone. And they simply cannot accept the reality that now confronts them. They want to invent their own happy outcome by selectively shaping the prophecies to correlate with their fantasy.

Ironically, it is the spectacle of their own pitiable predicament that is portrayed in the prophecy of Isaiah: “For the bed is too short to stretch out on, and the woven sheet is too narrow to wrap up in.”

Because of their having concluded a covenant with Death and the Grave – based upon their perpetual 1914 hoax – they simply cannot find a comfortable position in the bed they have made for themselves now that it is apparent that the world is on the edge of darkness. Yet, they are still struggling to wrap themselves in the prophecies – hoping to keep warm and not face the cold, hard reality of Jehovah’s judgment.

If you think I exaggerate consider the way the Society seeks to evoke the prophecy of Joel without any consideration of the real meaning of the prophecy. Again, from the 10th paragraph:

“One of the darkest periods in human history nears. The prophet Joel describes it as “a day of darkness and gloom.”

Indeed, the prophecy of Joel depicts an unprecedented disaster befalling the world and especially its impact upon the priests of Jehovah. In response Joel prophetically calls upon the older men to convene in the house of God and beseech Jehovah for his favor.

But as part of their covenant with Death the Watchtower has declared the older men and those who are specially called the “ministers of Jehovah” to symbolize the clergy of Christendom, who apparently are filled with terror from their  encounters with Jehovah’s Witnesses.

As far back as 1997 the Society has had it brought to their attention the absurdity of their interpretation of Joel and the implications for the future. No matter, they simply are not willing to hear. Certainly, it has been demonstrated that no mere human could ever disabuse them from their stupefied condition. That is why the prophecy of Joel addresses them this way, saying to them at the moment of impact: “Wake up, you drunkards, and weep!”

For a certainty, Jehovah’s people will face the end of the world together. However, first must come the beginning of the time of the end, otherwise known as the harvest, the conclusion of the system – when Jehovah’s powerful angels are dispatched to uproot the wicked from among them.

And the whitewashed wall must be demolished and the stupid prophets must be forever debarred from the intimate company of God’s people and their covenant with Death must be dissolved.

Afterwards Christ will regather Jehovah’s scattered sheep who will then face the attack of Gog. This is also what is conveyed in the prophecy of Joel, where it states: “For look! in those days and in that time, when I bring back the captives of Judah and Jerusalem, I will also gather together all the nations and bring them down to the Valley of Jehoshaphat. I will enter into judgment with them there in behalf of my people and my inheritance Israel, for they scattered them among the nations, and they divided up my land among themselves.” 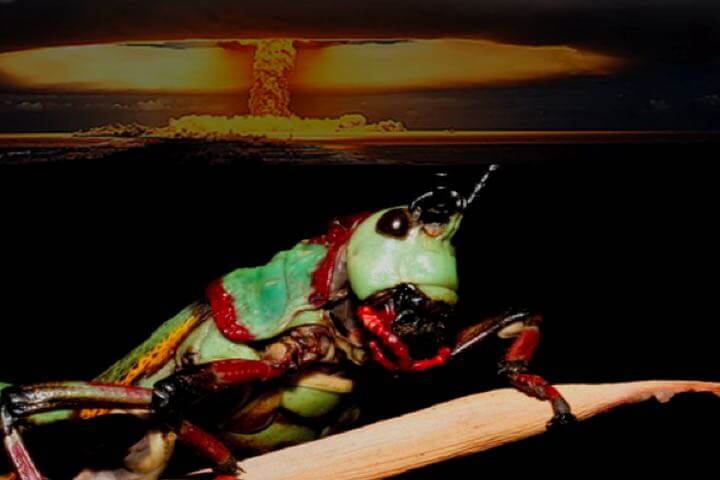