As of September 2022, it has been exactly 20 years since I first began to publish articles on e-watchman.com. Over the past two decades, well over 1,200 articles have been posted. There are also Slovak, Dutch and Spanish versions of the site. As the collection of articles grew it was suggested to me to write a book. The first edition of Jehovah Himself Has Become King was published in 2005, with two subsequent editions. (Translated into six languages) As other forms of media were adapted to the Internet I have utilized podcasts, videos and dabbled in shortwave. But why?

About a quarter of a century ago Jehovah opened my eyes to understand Bible prophecy in a unique way. True, it is an ongoing process, but it was initiated with a bang during an intense months-long Bible-reading marathon. But who gave me the authority to denounce the Watchtower in such harsh terms or speak in the name of Jehovah about the things to come? As the scripture says: “The lion has roared! Who will not be afraid? The Sovereign Lord Jehovah has spoken! Who will not prophesy?” — Amos 3:8

Indeed, I have heard the lion roar from afar. I have no choice but to prophesy.

To be clear, I was originally tutored by the Watchtower and educated by the program promoted by Jehovah’s Witnesses. I served as an elder, pioneered frequently—conducting over 100 Bible studies with interested persons, and was reaching out for the circuit work; however, Jehovah had another assignment for me. 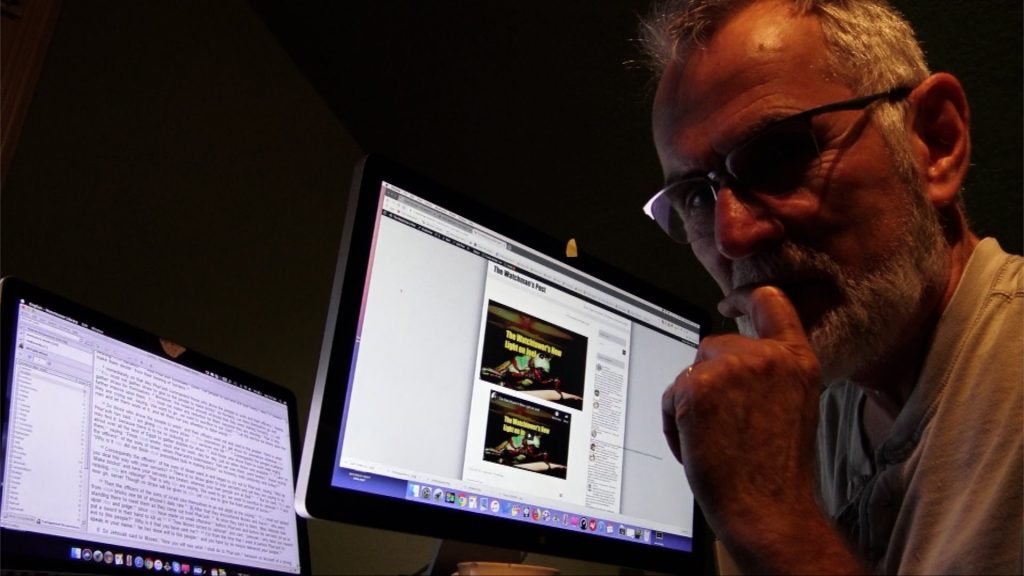 The spiritual education I received has not only provided the doctrinal foundation upon which I stand, but it is the platform upon which I have served as a watchman. That is why those who are not Jehovah’s Witnesses cannot easily relate to what I present. And, of course, Jehovah’s Witnesses cannot accept my message either—not because it is incomprehensible to them, but because of their overriding trust in the messaging of the leadership of the Watchtower.

The Governing Body has skillfully programmed those under their influence to reject outright any Bible-based message that they have not endorsed. What that means is, that they have shielded themselves from God’s reproof as found in the Scriptures—at least for now anyway. Realistically, it is not reasonable to expect them to consent to be identified as the “dictators of Sodom” or “the stupid prophets” whom Jehovah denounces in the books of Isaiah and Ezekiel, respectively. Obviously, there can be no acknowledgment that the man of lawlessness resides in the midst of the spiritual temple.

As a watchman, what I present is not something I was taught by any man, nor have I been impelled to consult with others to determine the veracity of what I understand to be the truth. I do not need the approval of a Teaching Committee or Writing Committee or anyone else. I have reason enough to believe I have been impelled by the anointing spirit of God.

I stand before God and it is my God who reproves me. Is that not the position Habakkuk took as Jehovah’s watchman? “Upon my watch-tower will I stand, and will station myself upon the bulwark,—So will I keep outlook to see—What he will speak with me and what I shall reply, when I am reproved.” — Habakkuk 2:1 The Emphasized Bible

One of the things the Lord revealed to me in the very beginning is the significance of Egypt in prophecy. Egypt continued as a nation long after Jehovah devastated it during the exodus. When Babylon was the reigning empire Egypt existed as an impediment to Nebuchadnezzar’s goal of total domination. Even so, God used Babylon as his sledgehammer to smash the nations—including Egypt and his own people and the city where Jehovah had placed His name—Jerusalem.

In the 19th chapter of Isaiah, there is no mention of the Chaldeans. It is Jehovah who brings about Egypt’s downfall. Picture this in your mind as the sky grows ominously dark. A storm is brewing, even a great tempest: “Look! Jehovah is riding on a swift cloud and is coming into Egypt. The worthless gods of Egypt will tremble before him, and the heart of Egypt will melt within it.”

Mind you, this was over 1,000 years after Jehovah brought the 10 plagues upon the land of Pharaoh. But there is something larger than the fall of Egypt in this prophecy, which is evident from what is stated in verses 19 and 20: “In that day there will be an altar to Jehovah in the middle of the land of Egypt and a pillar to Jehovah at its boundary. It will be for a sign and for a witness to Jehovah of armies in the land of Egypt; for they will cry out to Jehovah because of the oppressors, and he will send them a savior, a grand one, who will save them.” 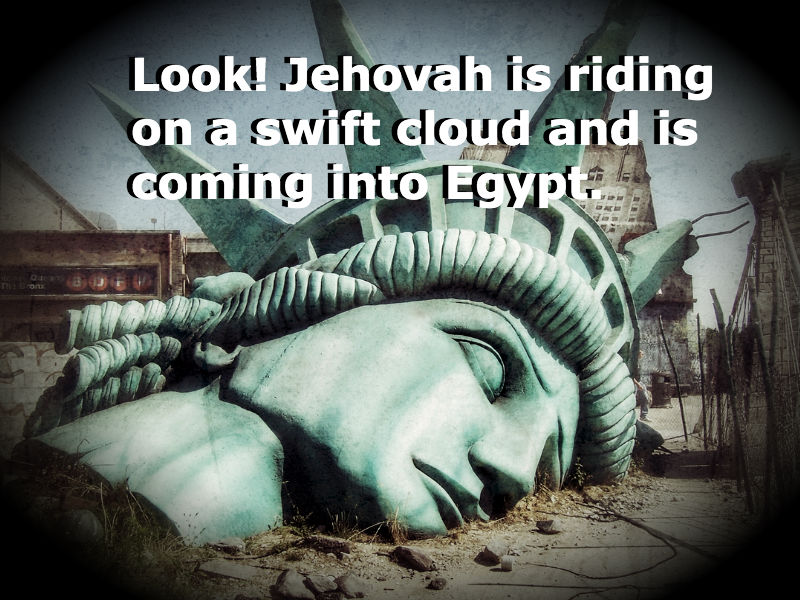 There is no record that God sent a savior to rescue his people who had fled to Egypt to escape the Chaldean juggernaut. Quite to the contrary, in fact. Through Jeremiah Jehovah specifically warned the Jews not to flee to Egypt seeking refuge: “O remnant of Judah. This is what Jehovah of armies, the God of Israel, says: ‘If you are absolutely determined to go to Egypt and you go there to reside,  then the very sword you are afraid of will catch up with you there in the land of Egypt, and the very famine you fear will follow after you to Egypt, and there you will die. And all the men who are determined to go to Egypt to reside there will die by the sword, by famine, and by pestilence. None of them will survive or escape the calamity that I will bring on them.”’ — Jeremiah 42:15-17

So, the question for thinking Bible students is this: In what sense did God send a savior to his people who were seeking shelter in Egypt? Since Jehovah decreed that those who fled to Egypt should be exterminated for their faithless disobedience obviously the prophecy recorded in the 19th chapter of Isaiah could not possibly have been fulfilled in ancient times.

Although there is much to be said concerning prophecy, for the sake of brevity Egypt represents the leading nation of the world prior to the time of the end; namely, the United States of America. It is this great nation that Jehovah will deliver up to a hard master, as stated in verse four: “I will hand Egypt over to a hard master, and a harsh king will rule over them,” declares the true Lord, Jehovah of armies.”

This harsh king is elsewhere depicted in prophecy as a fierce-looking king. Not to be overlooked is the fact that during the time of the end the king of the north will subjugate “Egypt,” a symbol of the king of the south.

Even at this moment, the spirit of Jehovah must be descending upon the nation, driving it into bewilderment and its leaders into confusion. What else can account for the sheer insanity that seems to have engulfed the nation? Who is the enemy? Is it Russia? No, it is China we must fear. No, wait, it is Iran! No, it is the Marxists in our midst. It is Bill Gates and the vaccine pushers! No, it is Russia. And that is why we must give billions of dollars to Ukraine to support the Nazis in the fight against Putin. Never mind that the Nazis have put out a hit list of American journalists and political leaders. And around and round they go. All the while, the banker’s dictatorship is being implemented.

It would appear that confusion is the order of the day. Little do they realize that if God has decreed it then there is nothing anyone can do about it: “Where, then, are your wise men? Let them tell you if they know what Jehovah of armies has decided concerning Egypt. The princes of Zoan have acted foolishly; the princes of Noph have been deceived; the chiefs of her tribes have led Egypt astray. Jehovah has poured out on her a spirit of confusion; and they have led Egypt astray in whatever she 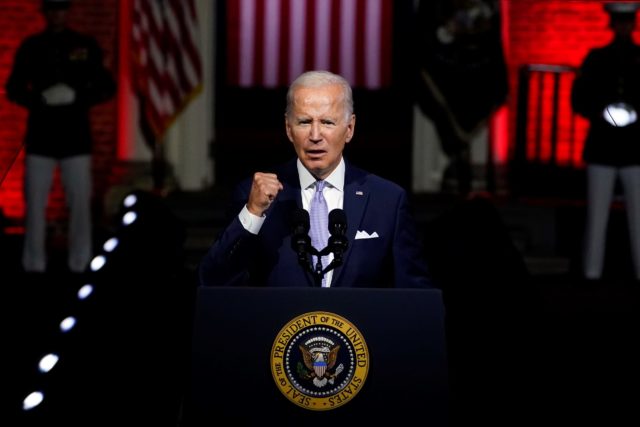 does, like a drunk staggering in his vomit. And Egypt will not have any work to do, whether for the head or the tail, the shoot or the rush.” — Isaiah 19:12-15

Meanwhile, the severely disabled, puppet president who is rumored to be given doses of Adderall when appearing before the cameras to read the teleprompter, has just declared that the tens of millions of supporters of the previous president are the single greatest threat to democracy. Those who proudly display their red white and blue, whose patriotic slogan is “make America great again,” are now America’s enemy! Most ironic, tens of thousands of Americans now deemed enemies of the state volunteered to join various branches of the military to protect America from foreign enemies. Too bad for them that they are not allowed to defend against domestic enemies.  Something evil this way cometh.  (Interestingly, the Watchtower has intimated the same sentiment—that the symbolic “clay” representing the people and their patriotic impulses—is the enemy of the government.)

There is even talk of civil war. It certainly seems as though powerful behind-the-scenes actors are working to ignite a conflagration in order to crush and capture the nation that was originally established as a unique experiment in a government of the people, by the people, and for the people. What does the following portend but civil war? — “I will incite Egyptians against Egyptians, and they will fight one another, each against his brother and his neighbor, city against city, kingdom against kingdom.” — Isaiah 19:2

So, who is the grand savior whom Jehovah will send to rescue his people who are destined to be oppressed by the hard master? Jesus is the Grand Savior.

If you take anything away from the messages presented on this site, know that Christ did not in any way, shape, or form return and begin ruling in his Kingdom in 1914. Neither is there any such thing as an invisible parousia. There is, however, every reason to believe that his thief-like coming is imminent. His stealth arrival will be heralded by the world-shocking crash of the greatest nation on earth.