You really will be like God, knowing good and bad

You really will be like God, knowing good and bad

Today, all must decide whether they believe that God’s way of doing things is superior to Satan’s or vice versa. In all sincerity, do you take Jehovah’s side by choosing to obey his laws and standards instead of doing things your own way? Do you see his Kingdom as the only answer to mankind’s woes? Or do you believe that man is capable of governing himself? Your answers to these questions will determine how you respond when people ask your opinion on controversial matters. Politicians, activists, and reformers have long struggled to find solutions to divisive issues. Their efforts may be sincere and well-motivated. Yet, Christians recognize that only God’s Kingdom can solve mankind’s problems and guarantee true justice. We must leave the matter in Jehovah’s hands. After all, if each Christian advocated the solution he thought best, would not our congregations soon become divided?

Satan implied that God did not wish for any creatures to be like him, to be capable of knowing good and bad, which is to say, God does not want anyone deciding for themselves (angels included) what is good and bad.

On the surface it would seem that the Devil had a valid point. And the Watchtower’s Daily Text comment surely agrees. Obviously the “debaters of this system,” as Paul referred to the worldly wise men, have no real solutions to the myriad of intractable difficulties of governing earth’s teeming billions. It is safe to assume they will never solve the real problems facing humanity. And surely the WT is right in noting that disunity would be the inevitable result if each Christian strictly decided for themselves what was right and wrong in all matters.

Still, the issue raised by the serpent in Eden does not merely call into question man’s ability to govern himself independently of God, it really raises a disturbing question about Jehovah’s character, which is why the rebel angel has become known as the Devil —the slanderer. “Did God really say..?” —the opening question that plied Eve’s innocent mind —unquestionably, reverberated through the universe, challenging each and every one of the myriads upon myriads of heavenly sons of God to consider whether what God says matters. Is God holding something back because he is insecure in his place as God? Is God like the tyrants of this world who seek to stay in power by eliminating their political rivals and keeping the masses ignorant and backward? What would happen if God’s creatures were allowed to decide for themselves what is good and bad? Well, look around —the answer is abundantly clear.

As regards the angels, some in fact followed Satan’s lead and personally decided for themselves that forsaking their proper place in heaven and cloaking themselves in flesh as men in order to enjoy as many beautiful women as they wished, was a good thing. Perhaps they lacked the foresight to see the end result of an unnatural union of human DNA and materialized angel DNA would produce a race of violent freaks that terrorized mankind. Or maybe they thought that was a good thing too. Whatever. Most reasonable people accept that violent bullies who murder, maim and steal are not desirable neighbors.

Almighty God allowed it to go on to the point that the “earth was filled with violence,” at which point Jehovah expressed his regret for making man in the first place. He could not bear to watch any longer and so wiped out the world with a cataclysmic deluge. Only eight humans survived. 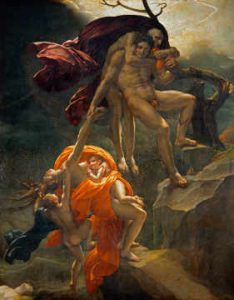 Although in the past century Satan’s geologists have worked long and hard to prove that the earth was not deluged, the record in stone and the written record prove otherwise. There once was a world that perished under a raging, earth-wide ocean. And in geologic terms it was not that long ago —roughly just four thousand years.

But while Jehovah demonstrated he has the will and the power to destroy on a grand scale, as well as provide salvation, the question lingered — was God withholding something out of fear? Was the execution of judgment merely the reaction of a tyrant to stay in control?

After the flood waters began to recede and the presently ongoing global warming trend first began to melt the massive sheets of ice and snow that instantaneously covered the northern and southern latitudes of the earth as a result of the collapse of the insulating oceanic canopy, Jehovah contacted a man named Abram.

God instructed him to move to a new land, one which God would show him. In time Abraham had a miraculously conceived son whom he named Isaac —meaning laughter. In time, though, Jehovah asked Abraham to do something unthinkable. He commanded Abraham to take the young man, Isaac, and slaughter him in sacrifice. No laughing matter.

Had God lost his mind? What parent would willingly kill their own offspring? Would Abraham accept what God decreed to be good? Or would Abraham decide for himself what was good and bad? As every Bible reader knows Abraham demonstrated that he had every intention to comply with God’s command. He went so far as to take the slaughtering knife in hand, at which point Jehovah’s angel intervened.

But why would God participate in this sort of charade, some may ask? Some 2,000 years later God’s firstborn son, who himself was miraculously born as a human —fully integrated into human DNA via Mary —said of Abraham: “Abraham your father rejoiced greatly at the prospect of seeing my day, and he saw it and rejoiced.”

Abraham rejoiced over the prospect of being the father of the messianic seed who would bring great blessings to all the nations. But how did Abraham see the day of Christ? He saw it figuratively by the act of sacrificing his only son —pre-enacting Jehovah giving his only-begotten Son.

As we all know, the sacrifice of Jesus’ perfect human life provided a ransom price for Adam’s dying offspring, making it legally and ethically possible for them to be redeemed from death. But like Isaac, Jesus was a willing participant in the sacrifice. He accepted God’s will. He acknowledged God’s determination of good and bad. That is why moments before his arrest, trial and execution, Jesus stated in prayer in the Garden of Gethsemane, as he sweat his own blood: “My Father, if it is possible, let this cup pass away from me. Yet, not as I will, but as you will.”

As a perfect man it is conceivable that Jesus could have produced perfect offspring himself, even with an imperfect mate. Think back to the occasion when Jehovah commanded Moses to step aside so he could exterminate the faithless Israelites and raise up a new race from Moses’ offspring. Moses intervened on the basis that it would bring reproach on Jehovah if he saved a people from Egypt only to later exterminate them in the desert. Just conjecture, but theoretically, Jesus could have set out on his own course to begin a new race and let Adam’s offspring simply die out. The point is, there may have been options, which adds great weight to Jesus’ submission to do God’s will and not his own.

But, again, what about the lingering question: “Did God really say…?”

Because Jesus, as a perfect man with free will, subjected himself to God’s will, which involved submitting himself to the cruelest death imaginable, Jehovah exalted Jesus by bestowing upon him, not only the Kingdom, but immortality. Contrary to Adam who demonstrated a shocking lack of regard for what God said, Jesus demonstrated over and over that he lived by Jehovah’s every utterance–frequently citing scripture as the sole authority.

Contrary to the common misconception that everlasting life equates with immortality, it does not. After all, faithful angels and many humans will live for all eternity. But they will never be immortal. Having immortality means having life within one’s self. Having life in one’s self means that the immortal one is no longer dependent upon God for life, or anything else for that matter. That being true, an immortal is no longer bound by God’s rules. They can decide for themselves what is good and bad completely independent from God.

The new creation, as it is called, composed of Christ and 144,000 bought from the degraded human race, is destined to become like God in every sense. After Jehovah preforms a heart transplant, replacing their hearts of stone with hearts of flesh, (Ezekiel 11:19) certainly they will know good and bad just as had been Jehovah’s exclusive right up until now.

By empowering his new creation with unlimited freedom God provides the answer to the question Satan raised. The answer is: Jehovah withholds nothing good from those who love him. Some really will be like God, knowing good and bad. Jehovah has willed it to be so. In fact, Jehovah is even willing to graciously give up his throne to Jesus —who in turn gives it back, because, after all, the Son is exactly like the Father.

Presently, as vicious demons maneuver the nations into an inevitable suicidal slaughter with weapons so powerful the entire planet could be blacked out for all eternity, the final members of the new creation are being prepared to take the stage before angels and men in order to bring the issue squarely to centerstage —the issue of God’s sovereignty and the right to rule. It is surely true, there really is no escaping the issue and the ages-old question: “Did God really say…?”