Those about to be killed

Those about to be killed

Whoever eats the loaf or drinks the cup of the Lord unworthily will be guilty respecting the body and the blood of the Lord.—1 Cor. 11:27.

What point is the apostle Paul here making? An anointed Christian would partake unworthily if he did not maintain a good relationship with Jehovah. Such a warning helps anointed Christians to remember that they have not yet taken hold of the reward. They need to continue to press on “toward the goal for the prize of the upward call of God by means of Christ Jesus.”  Under inspiration, Paul appealed to anointed Christians “to walk worthily of the calling with which [they] were called.” How should this be done? Paul goes on to say “with all humility and mildness, with patience, putting up with one another in love, earnestly endeavoring to maintain the oneness of the spirit in the uniting bond of peace.” Jehovah’s spirit promotes humility, not pride.

It is true, as a collective Christians have not yet laid claim on the prize of the upward call, with the obvious exception of those who have already finished their earthly course.

Although in his letter to the Philippians Paul included himself among those who had not attained the goal of the upward calling, in his second letter to Timothy, which was apparently written a few years later, Paul expressed his belief that he had faithfully finished the course set before him, saying: “For I am already being poured out like a drink offering, and the time for my releasing is imminent. I have fought the fine fight, I have run the race to the finish, I have observed the faith. From this time on, there is reserved for me the crown of righteousness, which the Lord, the righteous judge, will give me as a reward in that day, yet not to me only, but also to all those who have loved his manifestation.” —2 Timothy 4:6-8 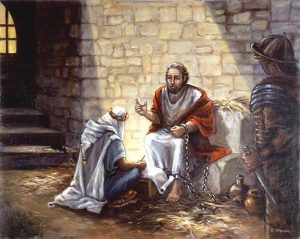 As the time of his execution drew near evidently the spirit bore witness to Paul that he had been approved —assured of being among the first resurrected “as a reward in that day.” In other words, shortly before his death the apostle was irrevocably sealed by the spirit. Presumably, each called one who is faithful to the end is similarly sealed, approved before death, confirming Jehovah’s choosing of them.

Paul’s experience confirms that there is a final sealing of the chosen ones that takes place prior to their being killed. Whereas, the opening of the fifth seal of Revelation speaks of the brothers of those already executed with the axe, as Paul had been, and those “about to be killed,” Revelation 7:1 indicates that the execution of God’s judgment is restrained “until after we have sealed the slaves of our God in their foreheads.” So, those “who are about to be killed” are the final sealed ones.

The seventh chapter goes on to reveal the total number of those sealed is 144,000 —12 thousand from the twelve tribes of “Israel.” However, the angel does not indicate that the 144,000 are all sealed at that time —in the interim between the opening of the fifth and sixth seals and the letting go of the four winds. As Paul’s experience indicates, obviously the souls who had been executed had already been sealed. Since “those about to be killed” are said to be the fellow slaves, witnesses and brothers of those who had been executed, it is evident that the final sealing only involves those referred to in the 12th chapter of Revelation as “the remaining ones of her offspring.”

The opening of the fifth seal reveals that the first resurrection begins shortly after war, famine and pestilence are unleashed, but before the tribulation, which is symbolized by the opening of the sixth seal. The fact that the souls of the executed are given a white robe signifies their resurrection. That is evident from what Jesus said to the Sardis congregation: “Nevertheless, you do have a few names in Sardis that did not defile their outer garments, and they shall walk with me in white ones, because they are worthy. He that conquers will thus be arrayed in white outer garments; and I will by no means blot out his name from the book of life, but I will make acknowledgment of his name before my Father and before his angels.”

As stated, although anointed Christians who died prior to the parousia were already sealed, their having been sealed with the seal of the living God results in their coming to life to form the heavenly Israel of God.

The final sealing effectively closes out the Christian era. There is no need for any more preaching, teaching or baptizing. Even the Lord’s evening meal is concluded. God’s purpose to select 144,000 joint heirs with Christ is accomplished with the final sealing. That is why the harvest is called the conclusion. What follows? The sealed, chosen ones give a final witness, even before governors and kings, just as Paul did. They are the 7,000 who are killed. And that is why they are killed, for condemning the world. But since their sealing officially made them sons of God and brothers of Christ, their executions are the same as if done to Jesus. At last, the world will be held responsible for killing Christ.

“And when they shall have finished their testimony, the beast that ascendeth out of the bottomless pit shall make war against them, and shall overcome them, and kill them.” –Revelation 11:7