The Last Will Be First

The Last Will Be First

Jesus was alive! Events of the next 40 days left no doubt that Jesus had been resurrected. Summarizing the evidence, the apostle Paul wrote to the Corinthians: “Among the first things I handed on to you was what I also received, that Christ died for our sins according to the Scriptures; and that he was buried, yes, that he was raised up on the third day according to the Scriptures; and that he appeared to Cephas, and then to the Twelve. After that he appeared to more than 500 brothers at one time, most of whom are still with us, though some have fallen asleep in death. After that he appeared to James, then to all the apostles. But last of all he appeared also to me as if to one born prematurely.”

During Jesus’ 3 1/2-year ministry he spoke to all kinds of people, men and women, children; he spoke to foreigners, a Phoenician woman, Samaritans, Roman soldiers, Greeks, Pharisees, Sadducees and whoever else would listen. But after Jesus was resurrected he only spoke to and appeared to those who had been his disciples prior to his death.

What is the significance of that?

Jesus’ post-resurrection appearances are a portent of the parousia, during which time Jesus will reveal himself to the chosen ones, coming alongside them to minister to them in a very special way. 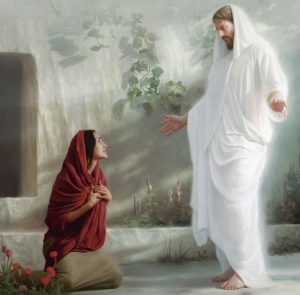 It is noteworthy that Jesus first appeared to Mary and Martha and instructed them to go tell the brothers that he was alive.  In spite of the fact that Jesus told his disciples on many occasions that he was going to suffer and die and be raised up, the apostles disbelieved the women.

Poor Thomas even disbelieved the apostles when they told him that they had seen the Lord. Eventually, though, all of those who formerly followed Jesus were convinced that he was alive. And then they all  had the marvelous privilege of seeing Christ ascend up into the heavens and disappear into a cloud.

It was on that occasion that two angels in glowing garments stood in their midst and explained to them that Jesus was going to return in the same manner that he had departed.

Because Jesus only cloaked himself with flesh after his resurrection in order to convince his disbelieving disciples that he had indeed been resurrected, we should not assume that the manner of Jesus’ return will be in the flesh — that is not the point. The truth that the angels sought to convey is that Jesus will be seen by his believers.

Although those gathered disciples who saw Jesus lifted up into the sky were not anointed at that point, they did become so 10-days later. In that, we may be  certain that  those who will experience the future presence and manifestation of Jesus will be made up exclusively of those who are anointed. And as Jesus promised his little flock, although he was going to prepare a place for them he would return to bring them to himself. So, the ultimate parallel to the disciples’ seeing Jesus depart will be when he returns to take them to his Father’s heavenly mansion.

And an interesting  facet to Jesus revealing himself to the women first, is that on several occasions Jesus said ‘many first will be last and the last first’.

Accordingly, we may expect that Jesus will reveal himself first to those who have been anointed most recently and consequently; they being looked down upon and given the last consideration now. Whereas, those who have been first prior to the parousia—such as the Governing Body —may find themselves in the same position as doubting Thomas, who refused to believe the testimony given him by his own brothers, only to be rebuked when Christ manifested himself to him too. That is to say, the leadership of the Watchtower, those who are not cast out as evil when the master comes, will be the last to have the privilege of seeing the glorious Christ.