The Scene of this World is Changing

The Scene of this World is Changing

Those who are sexually immoral, idolaters, adulterers, men who submit to homosexual acts, men who practice homosexuality, thieves, greedy people, drunkards, revilers, and extortioners will not inherit God’s Kingdom.—1 Cor. 6:9, 10.

If you struggle with temptation to engage in sexual immorality, what can you do? Acknowledge your weakness.Pray to God for strength. Avoid situations that could lead to immorality. And when a temptation arises, reject it without delay. Jesus set a powerful example for us in resisting temptations. He was not fooled by Satan’s promises, nor did he have to take time to weigh the pros and cons. Rather, he immediately responded with the words: “It is written.”  Jesus knew God’s Word, and that made it possible for him to act quickly and quote scriptures in the face of temptation. To fight Satan and win, we must not allow ourselves to be tempted to engage in sexual immorality.

Of course, there was sexual immorality back then, but it was not common, nor was it accepted as the norm. Pre-marital sex was considered shameful —not encouraged. Homosexuality was viewed as an abomination and those relative few who practiced it did not dare flaunt it in public for fear of reprisals and ridicule.

It was considered shameful for a woman to show her flesh in public. Even at the beach women were modestly attired in swimwear that was less revealing than the street clothes that women routinely wear now. Obviously, fashions in the Western world have changed dramatically over the past century, as have morals. What would have been considered vulgar and shockingly obscene a few generations before is now the hottest trend.

But fashions are merely a reflection of the values of a culture. The exhibition of tattooed flesh, the glorification of homosexuality, lesbianism and transgender freaks, is the end result of decades of spiritual neglect and cultural decay. What was once considered scandalous and taboo is now normal. Homosexuals, confined to the closet only a few years ago, now parade naked in the streets, celebrating sheer perversity –their gay pride. Indeed, as the inspired apostle seemingly foresaw, the scene of this world is changing. 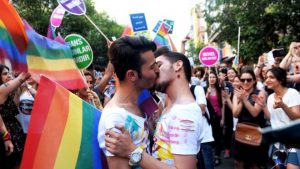 While sociologists may have their explanations for the transformation of Society, it is noteworthy that the cultural decay, which began gradually, almost imperceptibly, much like the physical rot of a piece of wood, seems to have coincided with the appearance of the International Bible Students on the scene, especially after the First World War and the so-called Roaring 20’s.

Although the mass media’s promotion of pop culture is unquestionably responsible for influencing society to gradually accept more and more perversity and depravity, what is less apparent is that the media’s onslaught against Western civilization is a demonically-driven response to the relative success of Jehovah’s Witnesses.

It is a sobering reality, that the unseen rulers of the world are the very same powerful angels who left their proper place in heaven and clothed themselves in flesh in order to have sex with beautiful women. The unnatural sexual union of materialized angels and fallen human flesh resulted in the incubation of a freakish race of giants called the Nephilim. The world was ruined in the sight of God as a result. As a consequence, Jehovah caused the great catastrophe known as Noah’s Flood. Although the ancient world perished as a result of the cataclysm, the angels did not. They were able to de-materialize and return to the spirit realm. However, God did not accept them back into his family of heavenly sons. Instead they were condemned to eternal death. It is their fatalism and fixation on sex that now permeates society.

As pay back to God for his having drowned their wives and sons, the demons are intent on corrupting the light-bearers if possible, knowing as they surely do that the terrible day of Jehovah’s anger is coming.