The Revelation of Jesus Christ

The Revelation of Jesus Christ

Jehovah could have had the angels do the writing of the Scriptures. After all, they have a keen interest in us and our activities. No doubt, the angels could have written down God’s message to mankind. But would they have seen things from a human perspective? Would they have been able to relate to our needs, our weaknesses, and our aspirations? No, Jehovah knew their limitations in this regard. By having humans write the Bible, Jehovah made it more personal for us. We can understand the thinking and emotions of Bible writers and others mentioned in the Scriptures. We can empathize with their disappointments, doubts, fears, and imperfections as well as rejoice in their joys and successes. Like the prophet Elijah, all the Bible writers had “feelings like ours.”

It is true, God’s holy angels did not physically write down the original words on vellum, leather or papyrus. But they were intimately involved in conveying messages, visions and dreams, to the prophets and scribes who then recorded those messages for us. After all, the Hebrew word for angel literally means messenger.

In some instances the spirit messengers interacted with the prophets, as in the case of Daniel. Here is what is recorded in the eighth chapter of Daniel: “While I, Daniel, was watching the vision and seeking to understand it, suddenly I saw standing in front of me someone who appeared to be a man. Then I heard the voice of a man in the midst of the Ulai, and he called out: ‘Gabriel, make that one understand what he saw.’ So he came near to where I was standing, but when he came I was so terrified that I fell facedown. He said to me: ‘Understand, O son of man, that the vision is for the time of the end.’ But while he was speaking with me, I fell fast asleep with my face to the ground. So he touched me and made me stand up where I had been standing. Then he said: ‘Here I am causing you to know what will happen in the final part of the denunciation, because it is for the appointed time of the end.’”

At the time Gabriel approached Daniel, causing him to collapse into a heap on the ground before him, the angel revived the terrified prophet with a reassuring touch and explained to him that the vision pertained to the time of the end. Daniel was later made to understand that he himself would not live to see the outworking of the marvelous and terrifying things he envisioned, as the angel said to him: “But as for you, go on to the end. You will rest, but you will stand up for your lot at the end of the days.”

No, Daniel must rest in the Grave until such time as the resurrection takes place and those asleep in the dust of the ground arise.

This is no doubt what the apostle Peter had in mind when he wrote concerning the prophets such as Daniel: “Concerning this salvation, the prophets who prophesied about the undeserved kindness meant for you made a diligent inquiry and a careful search. They kept on investigating what particular time or what season the spirit within them was indicating concerning Christ as it testified beforehand about the sufferings meant for Christ and about the glory that would follow. It was revealed to them that they were ministering, not to themselves, but to you, regarding what has now been announced to you by those who declared the good news to you with holy spirit sent from heaven. Into these very things, angels are desiring to peer.”

Seeing that Gabriel explained to Daniel that the vision would take place during the final part of the denunciation, why are the angels said to still be desiring to peer into these things? Because evidently they have not been allowed to understand completely. For example, Jesus said that no one, not even the angels, know the day or hour when the time of the end will begin.

But more than that, although the angels were intimately involved in supporting the earthly ministry of Christ —ministering to him directly on more than one occasion —evidently they do not understand all that is involved in “the glory that would follow.” What glory is that?

The apostle Peter wrote in the very next verse: “So brace up your minds for activity; keep your senses completely; set your hope on the undeserved kindness that will be brought to you at the revelation of Jesus Christ.” 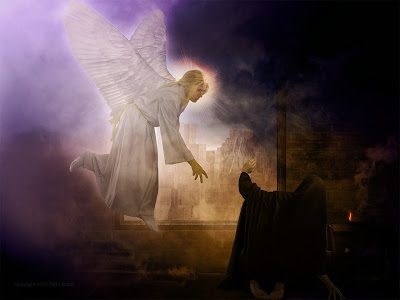 Likely Gabriel realized that his interacting with Daniel had some prophetic significance. That is made all the more certain due to the fact that the prophet had a similar experience with an angel that is recorded in the 10th chapter. Daniel wrote concerning it: “I looked up and saw a man clothed in linen, and around his waist was a belt of gold from Uphaz. His body was like chrysolite, his face had the appearance of lightning, his eyes were like fiery torches, his arms and his feet looked like burnished copper, and the sound of his words was like the sound of a multitude. Only I, Daniel, saw the vision; the men with me did not see the vision. However, a great trembling seized them, and they ran away and hid. Then I was left by myself, and when I saw this great vision, there was no power left in me and my dignified appearance left me and I lost all strength. Then I heard the sound of him speaking; but when I heard him speaking, I fell fast asleep with my face to the ground. But then a hand touched me, and it stirred me to get up on my hands and knees. Then he said to me: ‘O Daniel, you very precious man, give attention to the words that I am about to speak to you. Now stand up in your place, for I have been sent to you.”’

As we know, the angels are capable of conveying information to humans in less dramatic fashion. For example, the prophecy recorded in the seventh chapter was conveyed by means of a dream. Why, then, did the angel appear to Daniel as a glorious, superman? To fully appreciate the significance of the encounter consider the virtually identical experience the apostle John had in his vision. John wrote: “I turned to see who was speaking with me, and when I turned, I saw seven golden lampstands, and in the midst of the lampstands someone like a son of man, clothed in a garment that reached down to the feet and wearing a golden sash around his chest. Moreover, his head and his hair were white as white wool, as snow, and his eyes were like a fiery flame, and his feet were like fine copper when glowing in a furnace, and his voice was like the sound of many waters. And he had in his right hand seven stars, and out of his mouth a sharp, long, two-edged sword was protruding, and his countenance was like the sun when it shines at its brightest. When I saw him, I fell as dead at his feet. And he laid his right hand on me and said: ‘Do not be afraid. I am the First and the Last, and the living one, and I became dead, but look! I am living forever and ever, and I have the keys of death and of the Grave.”’

John was in no doubt who it was before him. He knew it was the glorious Lord Jesus, whom he had seen ascend into the heavens, into a cloud, some 60 years prior to his vision on the island of Patmos.

The similarities to Daniel’s encounter are not coincidental. This means that Daniel, described as a very precious man by the angel, played the role of the holy ones who will personally experience the revelation of Jesus Christ during the time of the end. The fact that Daniel had the experience as he walked along the banks of the river, and that his companions became terrified but could not see the vision, is a portrayal of the reality that the revelation of Christ will only be beheld by the precious chosen ones.

It is these things the angels are desiring to peer into.