A slave is not greater than his master. If they have persecuted me, they will also persecute you.—John 15:20.

More than once, Paul was persecuted because of his faith.  One such incident occurred in Lystra. After healing a man who was lame from birth, Paul and his companion Barnabas were hailed as gods. The two had to beg the ecstatic crowd not to worship them! All too soon, however, Jewish opposers arrived, and they used slander to poison the minds of the people. Quickly the tide turned! The people now pelted Paul with stones and left him for dead. After visiting Derbe, Paul and Barnabas “returned to Lystra, Iconium, and Antioch. There they strengthened the disciples, encouraging them to remain in the faith and saying: ‘We must enter into the Kingdom of God through many tribulations.’”

The persecution of Jehovah’s Witnesses in modern times is fairly well known. Perhaps the most infamous was the Nazi persecution, which is documented in the Jewish Holocaust Museum.

But for the most part Jehovah’s Witnesses enjoy government protection. Especially has that been the case in America. Although extremely unpopular the Watchtower organization has thrived because of the constitutional guarantees, which have been the bedrock of the nation.

Of course, persecution can come in much more subtle forms, such as opposition from family or acquaintances. At times Jehovah’s Witnesses are threatened or accosted in their ministry.

But the safe haven environment afforded by so-called democratic, free nations, is only a temporary provision of God. Yes, that’s right, God has blessed America, as they say, and seen to it that there has been a relatively prosperous and peaceful environment in order to facilitate his work. 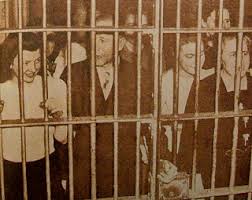 Keep in mind that the nations stand in their relative positions by God, as Paul stated when discussing a Christians relationship with the civil authorities.

To underscore the point, the angel who provided Daniel the prophecy of the kings of the north and south prefaced his revelation by saying that he had fought against the demonic prince of Persia and stood up as a strengthener to Darius, the king of Persia. The reason that was done was to benefit Jehovah’s people who were in Persia after the fall of Babylon. So, even though Satan is the ruler of the world Jehovah at times overrides the Devil’s authority as it suits his purpose.

THE COMING STORM OF PERSECUTION

Given the tendency of nations to become tyrannical it is apparent that Jehovah’s angels have resisted the dark princes in modern times too, who would use their earthly minions to snuff out the truth.

However, what happens when the evangelical phase of God’s work is concluded? Then God allows the nations to come under complete control of the demons, which also will serve his purpose. The present democratic order will be crushed. In its place a global government that more than likely will be communistic in nature. Of note, the foremost communistic nation today, China, is anti-religion.

The persecution that will be unleashed will serve as discipline from God. The development that will bring the present system down will coincide with the ouster of Satan and the demons from heaven in advance of the final confrontation at Armageddon.

Jehovah’s Witnesses will then find themselves in unchartered waters —inundated in a raging flood of persecution with no legal protections. This is what is foretold in numerous prophecies. For example, the 28th chapter of Isaiah likens God’s judgments to a flash flood and thunderous hailstorm.