“This is what will be done to you, O Bethel”

“This is what will be done to you, O Bethel”

Where are your gods that you made for yourself? Let them rise up if they can save you in your time of calamity.—Jer. 2:28.

Israel did not prove faithful to Jehovah. They allowed themselves to be influenced by nations that worshipped gods of wood and stone. Instead of producing fine fruitage by practicing pure worship and acting as Jehovah’s faithful witnesses, Israel produced the rotten fruitage of idolatry.  Thus, Jesus told the hypocritical Jewish leaders of his day: “The Kingdom of God will be taken from you and be given to a nation producing its fruits.”  Only those in the “new covenant,” foretold by Jehovah through his prophet Jeremiah, could be part of that new nation, spiritual Israel. Of the spiritual Israelites who would be brought into that new covenant, Jehovah had prophesied: “I will become their God, and they will become my people.” Jehovah made spiritual Israel his people in the first century.

The Watchtower Society did not prove faithful to Jehovah. They allowed themselves to be influenced by the nations that worshipped gods of wood and stone. Instead of producing fine fruitage by practicing pure worship and acting as Jehovah’s faithful witnesses, the leadership of Jehovah’s Witnesses has produced the rotten fruitage of idolatry.

The more successful the Watchtower has become, the more persons who have been baptized into “Jehovah’s spirit-directed organization,” the more money it has amassed, the more properties it has acquired, the more it has trusted in itself. That is why the opening verses of the 10th chapter of Hosea, cited in the text, says: “Israel is a degenerate vine yielding its fruit. The more his fruit increases, the more he multiplies his altars; The better his land produces, the more splendid his sacred pillars. Their heart is hypocritical; now they will be found guilty. There is one who will break their altars and destroy their pillars.”

In the days of the 10 tribe kingdom the one who broke their altars and destroyed their pillars was the king of Assyria. During the conclusion Jesus foretold that a disgusting thing will bring desolation upon a holy place.

In order to help his followers understand what is to occur Jesus advised the discerning reader to consult the holy book of Daniel, the eighth chapter of which foretells that a fierce-looking king will come against the Prince of princes. He does that by throwing down Christ’s congregation, that is to say those who are in the new covenant. Here is what it says: “It exalted itself even against the Prince of the army, and from him the constant feature was taken away, and the established place of his sanctuary was thrown down. And an army was given over, together with the constant feature, because of transgression; and it kept throwing truth to the earth, and it acted and had success. And I heard a holy one speaking, and another holy one said to the one speaking: ‘How long will the vision of the constant feature and of the transgression causing desolation continue, to make both the holy place and the army things to trample on?”’

The reason the new covenant is connected to the repurchase of Israel is because the ultimate accomplishment of the new covenant, which is to create a kingdom composed of 144,000 immortals, will not be realized until after the desolation. That is why in Jeremiah God says: “‘And they will no longer teach each one his neighbor and each one his brother, saying, ‘Know Jehovah!’ for they will all know me, from the least to the greatest of them, declares Jehovah. ‘For I will forgive their error, and I will no longer remember their sin.”’

The full implementation of the new covenant will bring an end to the teaching work of the Watchtower. After all, is not the stated purpose of the ministry of Jehovah’s Witnesses to teach people to know Jehovah? But when all of the holy ones are made to know Jehovah both as a Punisher of the errand and the Repurchaser, there will no longer be any need for a publishing company to teach anyone. 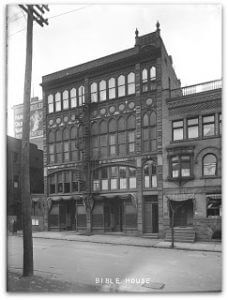 As regards the hypocrisy of the leadership of Jehovah’s Witnesses at this present time, as you know, Bethel started out in the 1880’s as a little three story building in Allegheny, Pennsylvania. But C.T. Russell thought it best to move the headquarters to Brooklyn, then known as the city of churches. So, since 1909 Bethel became a fixture in Brooklyn, one of the five boroughs of the sprawling New York City.

Over the course of the decades Bethel prospered. More and more buildings were purchased and renovated as offices and dormitory facilities for the growing Bethel family. In the mid 70’s the Watchtower purchased the rundown Towers Hotel and completely gutted it and renovated it from the inside out, using mostly the volunteer labors of Jehovah’s Witnesses. But a few years ago the Watchtower’s board of directors decided to leave Brooklyn and build a new headquarters in the countryside.

The real estate market is hot for waterfront property facing the Lower Manhattan skyline and the Watchtower stands to make a billion dollars on the sale of a few dozen properties. And now that a small army of Jehovah’s Witnesses skilled in the construction trades and willing to devote themselves to the project are readily available, it seems like a wise business decision. Buyers are apparently especially salivating over the coveted Brooklyn Heights, Towers building.

But should properties and facilities once dedicated to God in solemn ceremony be casually sold because it makes good business sense, merely because a profit can be had? And if the reason for moving to the heart of one of the most populous cities of the world was to have a higher profile, why is Bethel retreating to the confines of a secluded forest by a lake? Is it for the glory of God or their own desire?

Most hypocritical, Bethel’s businessmen have marketed Jehovah’s properties so as to appeal to the worldly desires of prospective buyers; touting the luxuriousness and romance of the gilded Tower; appealing to the sensuous desires for a prestigious address and the amenities of an upscale, trendy neighborhood and its spectacular view of the grand city across the river. Most disturbingly, though, if the end of the present system is imminent, as Jehovah’s Witnesses are taught, why appeal to prospective buyers on the basis of the assumed permanence of the city?

But most importantly, while Bethel may be run by lawyers and accountant bean counters, what is Jehovah’s say in the matter? Does he have a voice? Indeed he does. In short order we may expect Jehovah’s punishing agent to receive his assignment and begin his work. After describing its desolation by the “Assyrian” the 10th chapter of Hosea concludes: “This is what will be done to you, O Bethel, because of your utter wickedness.”

“A new history in the making,” indeed!