Lift Up Your Eyes to Heaven – When?

Lift Up Your Eyes to Heaven – When?

Lift up your eyes to heaven and see. Who has created these things?—Isa. 40:26.

Regarding stars, the Houston, Texas, Chronicle reports on a recent study suggesting that there are “300 sextillion of them. . . . That is a 3 followed by 23 zeros.” The stars are organized into galaxies, each containing billions or even trillions of stars, as well as many planets. Most galaxies are further organized into groups called clusters and into larger superclusters. Like the righteous spirit creatures in heaven, the physical heavens are superbly organized. Therefore, it is logical to conclude that Jehovah would organize his servants on earth. That is vitally important because they have so much important work to do. The splendid record of faithful service established by Jehovah’s worshippers past and present provides powerful evidence that he has been with them and that he is “a God not of disorder but of peace.”

When God’s Kingdom comes to power it will set into motion a series of earth-shaking events that will ultimately rock this wicked world into oblivion.

First, war erupts in heaven. Then that battle in the invisible realm will spread to the earth when Satan and his angels are cast down. According to Revelation peace will be taken from the earth so that they should slaughter one another with a great slaughter. As a result of the tumult the greatest nation in the world will collapse. America will be overthrown. But from the ashes will arise a new world order —what Revelation portrays as an eighth king.

Jehovah’s Witnesses will find themselves in uncharted waters. The Watchtower will be suppressed and subverted. Many will lose heart and hate and betray one another. Just as the Jews were held in bondage in Babylon, Jehovah’s Witnesses will be under governmental restraint and dominated by the beast’s religious prostitute; hence, “Jacob” will be in exile in Babylon the Great. It is at that point when Jehovah will speak. That is the setting in which God exhorts his people to look up to the heavens.

The 40th chapter Isaiah is the beginning of God’s dialog with his people that extends through chapter 66. Isaiah 40:3-5 declares: “A voice of one calling out in the wilderness: ‘Clear up the way of Jehovah! Make a straight highway through the desert for our God. Let every valley be raised up, and every mountain and hill be made low. The rough ground must become level, and the rugged ground a valley plain. The glory of Jehovah will be revealed, and all flesh will see it together, for the mouth of Jehovah has spoken.’”

Has the Watchtower cleared a path for Jehovah’s grand entry? Hardly! The teachings of the Watchtower have completely obscured the significance of the parousia. And the leadership of Jehovah’s Witnesses has strewn the road with countless stumbling blocks, even a virtual whitewashed wall. It is these that must be cleared away, and which will be when Jesus’ powerful angels are dispatched during the harvest to remove all persons doing lawlessness and all things causing stumbling. Only then will the glory of Jehovah be revealed by means of the glorious manifestation of Jesus Christ. 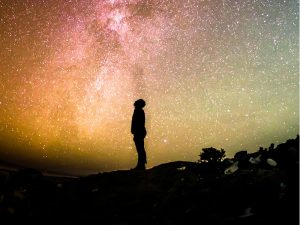 It is because mankind will be faced with extinction, when God cuts short the tribulation on account of the chosen ones, that we will have a better appreciation of how fragile and transitory we are. That is why Isaiah 40:6-8 states: “Listen! Someone is saying: ‘Call out!’ Another asks: ‘What should I call out?’ ‘All flesh is green grass. All their loyal love is like the blossom of the field. The green grass dries up, the blossom withers, because the breath of Jehovah blows upon it. Surely the people are but green grass. The green grass dries up, the blossom withers, but the word of our God endures forever.”’

In the aftermath of the downfall of America and the collapse of the present financial system, when mankind is gripped with fear over all the things coming upon the world, Jehovah will speak to the tiny inhabitants on this comparatively minuscule planet, saying: “There is One who dwells above the circle of the earth, and its inhabitants are like grasshoppers. He is stretching out the heavens like a fine gauze, and he spreads them out like a tent to dwell in.  He reduces high officials to nothing and makes the judges of the earth an unreality.”