I am With You All the Days Until the Conclusion – Then What?

I am With You All the Days Until the Conclusion – Then What?

The common, or Koine, Greek language helped to promote good communication and unity among the early Christian congregations. Greek was widely spoken and understood. Thus, God’s servants could communicate with all kinds of people, and this contributed to the spread of the good news. Moreover, Jews living in Egypt had translated the Hebrew Scriptures into Greek. People were familiar with this Septuagint version, and the early followers of Christ quoted freely from it. How could Christians use the Scriptures in their ministry? Scrolls were cumbersome, for they had to be rolled and unrolled, and usually there was writing on only one side of the parchment. The Gospel of Matthew alone would fill an entire scroll. But then came the codex—the earliest form of a book. It was a collection of pages bound together. A reader could open a codex and easily locate a passage of Scripture.

There is no question that the timing of the first coming of the Messiah was made to coincide with certain developments in the ancient world, such as the dominance of Greek and Latin and the invention of the book itself. As a result of having a common language and the ability to have a more portable form of the Holy Scriptures, the preaching and disciple-making work Christ assigned his followers was carried out with great success.

However, over time as Christianity became more popular it was corrupted and eventually it was taken over by the state and fused with the pagan religion of Rome —Mithras. Then the Dark Ages engulfed Europe and ignorance and superstition prevailed under the tyranny of the Catholic Church.

Probably the single most important invention during the renaissance was the printing press, around 1440. Appropriately, the first book to be printed using the new technology was the Holy Bible. Less than 50 years after the invention of the printing press Christopher Columbus discovered the so-called new world. 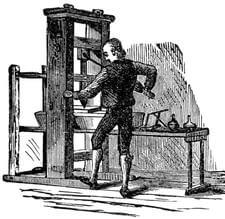 Over the course of the ensuing centuries the peoples of Europe began to colonize less developed parts of the world, many of the colonists taking their English King James and Douay Bibles with them. As in the first century with Greek and Latin, as a result of colonization English and Spanish, and to a lesser extent Portuguese and French, became the common languages, with English gradually becoming the universal tongue.

One feature of the original Authorized King James Version of the Bible that would have a far-reaching impact on English readers was the use of the name JEHOVAH in four places. (The most recent versions of the KJV have completely expunged the name of God and replaced it with Lord.) 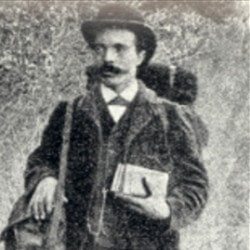 Although the printing press made mass-production possible, the Bible was still not widely available to the poor due to its cost. So it was, during the early 1800’s dozens of Bible societies sprang up in America, England and Europe that were devoted to distributing the Bible far and wide. By 1900 there were about 1,000 “pedlars,” also known as colporteurs, who traveled through Europe distributing Bibles to the poor. Eventually over 100 Bible societies came under the umbrella of the British Bible Society, or more commonly called The Bible Society.

By the dawn of the 20th century the Bible was at last widely available and was being read and studied by millions of people. Thus, the stage was set for the Watchtower Bible and Tract Society to come on the scene and sponsor the greatest preaching and teaching campaign ever undertaken.

In the spirit of the other inventors who developed the book and the printing press, Jehovah’s Witnesses spearheaded the use of computers to translate Bible literature. MEPS, an acronym for Multilanguage Electronic Phototypesetting System, was originally developed in the 1980s by the Watchtower.

And more recently, JW.org has pioneered the use of hand-held devices as a preaching tool in the field. Now ministers can have in the palm of their hand access to the Bible and Bible reference material in literally hundreds of languages. To illustrate the power of such a small device, in my area there are many Amish farms. When the witnesses try to engage them the Amish are known to resist saying that they only read the Bible in German. With a download from JW.org now a brother’s reply to the potential conversation stopper might be: (Swipe, tap…tap) ‘No, problem, here’s that verse in German.’ 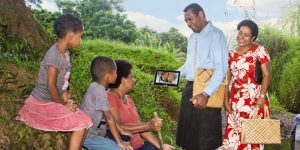 Now, as regards prophecy and where we stand in relation to the ultimate accomplishment of Jehovah’s great overarching purpose to create a new heavens and a new earth, Jehovah’s Witnesses are convinced that the success of the Watchtower-sponsored worldwide work is due to the Kingdom having come to power in 1914. But consider this, the first century Christians also accomplished a remarkable work without any of the technologies that are available today. As the day’s verse states, the inspired apostle said the good news had been preached in all creation under heaven.

Question: If Christ directed and impelled his followers to preach the message in all creation back then, why ought we assume that the accomplishment of a similar work now can only come about if Christ’s Kingdom is ruling the world?

Besides, the last words Jesus spoke to his disciples before his ascension were: “And look! I am with you all the days until the conclusion of the system of things.”

Obviously, the original Christians accomplished their work because Jesus was with them. Quite likely divine providence led Johannes Gutenberg to invent his movable type contraption, which changed the world. No doubt Jesus impelled John Wycliff and William Tyndall to defy the authority of the Church and translate the Bible into English, which also had a far-reaching impact. And Jehovah’s Witnesses believe that Jesus was with C.T. Russell and the International Bible Students over the four decades leading up to 1914. So, an important question to consider is: If Jesus is with his followers up until the conclusion what changes when once the conclusion begins?

The reason that question ought to be pondered is because not much changed as regards the Watchtower and the Bible Students from the pre-1914 period to the post-1914 era. True, the world changed considerably as a result of the Great War. But there is no discernible difference in the relationship of Christ to his followers since 1914. After the tumult that followed Russell’s death and the release from incarceration of his successor, Rutherford, the Watchtower and the Bible Students simply carried on the work as before. The reason that is an important distinction is because it indicates that the conclusion of the system did not begin in 1914, or any time since then.

As evidence of the deluding influence the Watchtower wields over Jehovah’s Witnesses consider their inability to comprehend the message contained in the prophecy of Joel, which unquestionably concerns the very matter of the end of the preaching of the Christian message.

What are we to conclude then, that when the end of the age begins Christ will no longer be with his followers? Yes and no. The truth is, during the conclusion, or the time of the end, Christ temporarily abandons his flock and allows his sheep to be scattered. Then the final gathering takes place. And instead of Christ being with them, as he has been all down through the ages —they will finally be with him.

The most obvious reunion will take place via the first resurrection. That is when all of the first century Christians and apostles down to those chosen ones who have died most recently, are resurrected.

But the holy ones who are living then will experience the parousia. That is when Christ comes alongside them to minister to them, as he promised his little flock, saying: “Be dressed and ready and have your lamps burning, and you should be like men waiting for their master to return from the marriage, so when he comes and knocks, they may at once open to him. Happy are those slaves whom the master on coming finds watching! Truly I say to you, he will dress himself for service and have them recline at the table and will come alongside and minister to them.”

Jesus’ coming alongside his slaves and ministering to them, making them recline at the table, invokes the scene of the original evening meal, when Christ girded himself and assumed the role of a slave and washed the feet of the apostles as they reclined at the table. In other words, the coming of the master to minister to his slaves is the consumption of the new covenant, which Jesus initiated when he passed the bread and wine symbolizing his flesh and blood to his 11 disciples.

To be sure, Christ’s ministry to the remaining slaves is what occurs during the parousia, which literally means to “come alongside.” The presence or manifestation of Jesus then will be extraordinary, resulting in the total enlightenment and transformation of the chosen ones, so they shine as brightly as the sun in the Kingdom of Jehovah. Then they will be made to stand before governors and kings in order to give them a witness. And then the end will come.