The Brothers of Christ and the Two Witnsses

The Brothers of Christ and the Two Witnsses

Today, we have a clear understanding of the illustration of the sheep and the goats. Regarding the identity of those mentioned, Jesus is “the Son of man,” the King. Those referred to as “my brothers” are spirit-anointed men and women, who will rule with Christ from heaven. “The sheep” and “the goats” represent individuals from all nations. These ones are not anointed by holy spirit. What about the timing of the judgment? This judgment will occur toward the end of the great tribulation just ahead. And what of the reason why people will be judged as either sheep or goats? The outcome hinges on how they have treated the remaining ones of Christ’s spirit-anointed brothers on earth. With the end of this system so close at hand, how grateful we are that Jehovah has progressively shed light on this illustration and on the related illustrations recorded in Matthew chapters 24 and 25!

Actually, no, the Watchtower does not have a clear understanding of the illustration. Granted, the adjustment 20 years ago that moved the judgment of the sheep and goats to the future was a step in the right direction. But the Watchtower’s seers still don’t have it in proper focus.

The reason, of course, is their fixation on 1914 as the year that Christ sat down on his throne. Yet, the illustration in question places the Son of man sitting down on his glorious throne as an immediate prelude to the gathering of the nations for judgment, which the Watchtower contradictorily teaches is a future event.

There is a reason Jesus spoke the illustration of the sheep and the goats after the three related illustrations of the faithful and unfaithful slaves and the wise and foolish virgins. It is because the judgment begins with those who are anointed. As Paul wrote to the Romans, saying: “And he will pay back to each one according to his works: everlasting life to those who are seeking glory and honor and in corruptibleness by endurance in work that is good; however, for those who are contentious and who disobey the truth but obey unrighteousness, there will be wrath and anger. There will be tribulation and distress on every person who works what is harmful, on the Jew first and also on the Greek; but glory and honor and peace for everyone who works what is good, for the Jew first and also for the Greek. For there is no partiality with God.” —Romans 2:6-10

Paul’s reference to “the Jew” has nothing to do with a person’s race or nationality. It is a spiritual designation. A spiritual Jew is one who is anointed. Jesus made that clear in his letters to the congregations in Revelation, where he spoke of those who claimed to be Jews, but who where lying. And those who are false to their calling as Jews are judged adversely, as Jesus said of the evil and sluggish slaves: “And throw the good-for-nothing slave out into the darkness outside. There is where his weeping and the gnashing of his teeth will be.”

Now, as regards the judgment of “the Greek,” which is to say the sheep and the goats, those who are not anointed: They are judged afterwards, as the series of illustrations confirms. But here is the thing: Since the wicked and sluggish slaves have not been cast out yet, how can the righteous judgment of the sheep and the goats be based upon their giving or not giving assistance to those who only falsely claim to be brothers of Christ? Obviously, they cannot be judged fairly on that basis.

The point is, it is only after the spiritual Jews are judged, that is when those Jews who are approved enter into the Kingdom and become accepted as full-fledged brothers of Christ —making them sons of God, the same as Jesus, the firstborn of many brothers. It is their acceptance as sons of God that will then bring about the phenomenon Paul referred to in the eighth chapter of Romans —the revealing of the sons of God. And when the full number of the sons of the Kingdom has been attained, then the Kingdom is complete. That is when Jesus will sit down on his throne —the resurrected holy ones with him.

Then the revealing of the remaining chosen sons of God will be the basis for the judgment of the sheep and the goats. That is when the prophecy of Zechariah will be fulfilled, which states: “This is what Jehovah of armies says, ‘In those days ten men out of all the languages of the nations will take hold, yes, they will take firm hold of the robe of a Jew, saying: “We want to go with you, for we have heard that God is with you people.”’

Besides, as has been pointed out repeatedly, anointed witnesses are not presently suffering hunger, thirst, imprisonment or homelessness. Some may be ill but that is a normal human experience. It is after their acceptance into the Kingdom —that is to say, after they are sealed —that is when they will be persecuted —not only by the beast, but by their former brothers too, as Jesus foretold: “As for you, look out for yourselves. People will hand you over to local courts, and you will be beaten in synagogues and be put on the stand before governors and kings for my sake, for a witness to them. Also, in all the nations, the good news has to be preached first. And when they are taking you to hand you over, do not be anxious beforehand about what to say; but whatever is given you in that hour, say this, for you are not the ones speaking, but the holy spirit is. Furthermore, brother will deliver brother over to death, and a father a child, and children will rise up against parents and have them put to death. And you will be hated by all people on account of my name. But the one who has endured to the end will be saved.”

Their being saved does not mean they avoid death. On the contrary, Jesus was saved from death —not by avoiding it, but by means of a resurrection from the dead. It is the same with the brothers of Christ during the time of the end, only they do not even have to sleep three days.

ELIJAH AND THE COMING OF CHRIST

The prophet Elijah played a special role in illustrating the things to come. Although Elijah is considered the greatest of the ancient prophets, he didn’t write one word of Scripture, as did Jeremiah, Isaiah, Ezekiel, etc.

Elijah foreshadowed what is to come during the judgment phase —during the conclusion. Elijah’s ministry started when, on his order the heavens were stopped up so that no rain fell for three and a-half years.

During that time Elijah lived as fugitive. He was homeless, thirsty and hungry. But Jehovah miraculously fed him in the wilderness by the ravens. It was when he was holed up in a cave in the wilderness that God appeared to him, speaking in soft low voice, which foreshadows Christ coming alongside his brothers in order to minister to them, as Jesus said he would in the 12th chapter of Luke.

At one point Elijah went to Sidon and a non-Jewish woman gave him her last bit of food. As a result of her support for Jehovah’s prophet she was miraculously provided with flour and oil and her son was resurrected. In other words, she and her son were saved for doing good to God’s persecuted servant —a pattern of the sheep who will receive God’s blessing for supporting Christ’s brothers during their tribulation. 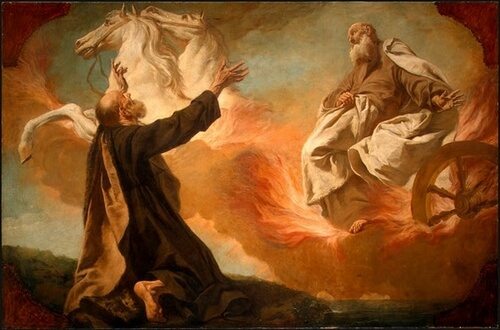 Most notably, Elijah’s ministry ended in rather dramatic fashion. As he and Elisha and 50 of the prophets were walking a fiery war chariot descended in a windstorm and Elijah was taken up into the heavens, leaving behind Elisha and the 50. Of course, Elijah did not literally ascend into the spirit realm. But he did participate in a prophetic drama that has to do with the ascension of the sons of God as a prelude to Armageddon. That is evident from the appearance of Elijah in the Transfiguration. He, along with Moses, are also the two witnesses of Revelation.

Not coincidently, the Elijah-like witness is said to prophesy for 1,260 days —the same length of time Elijah literally stopped the rain from falling. And like Elijah, the two witnesses are called to heaven and go up in a cloud. This symbolizes the instantaneous resurrection of the sealed ones upon their martyrdom.

Revelation and the Two Witnesses