Woe to those who enact harmful regulations

Woe to those who enact harmful regulations

In the 10th chapter of Isaiah the denunciation continues: “Woe to those who enact harmful regulations, who constantly draft oppressive decrees, to deny the legal claim of the poor, to deprive the lowly among my people of justice, making widows their spoil and fatherless children their plunder!”

God has always required the judges of his people to look after the welfare of the helpless and disadvantaged. God does not expect that the lowly be given preferential treatment, just that they not be neglected or taken advantage of, or abused in any way. The obligation to do justice for the widows and fatherless boys was the foundation of the Law of Moses and it is the prime requirement of true Christianity as well, according to James 1:27.

As the world has become more and more godless and corrupt in the past half-century, Jehovah’s Witnesses have also been afflicted from within by many acts of lawlessness. The most grievous of which have been numerous crimes committed against children. Even the Watchtower’s spokesman several years ago bemoaned the fact that child abuse was a scourge of our times that has affected Jehovah’s Witnesses as well. Indeed, it has!

Some years ago the Silentlambs organization revealed that Bethel kept a database of approximately 25,000 accused sexual offenders. No doubt many offenders have had multiple victims. And no doubt, too, many victims have never come forward for whatever reason. More disturbing, likely some perpetrators have never been found out. But considering how common child abuse is within the organization there is no doubt that several 10’s of thousands of children have been abused. That would likely be a conservative figure considering that there are approximately 100,000 congregations of Jehovah’s Witnesses around the world – an average of one victim per congregation over the years.

That figure may well be comparable to the numbers of Israelite children who were cruelly sacrificed on the altars of Molech and Chemosh. 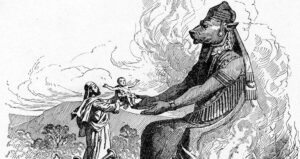 Considering the deep feeling both Jehovah and Jesus have for the tender young souls, the rape and abuse of one child is one child too many. That tens of thousands of children have fallen victim within the Watchtower’s supposed predator-free spiritual paradise is a matter that will at some point inevitably come before Heaven’s judicial review.

But while the crimes committed against innocent children is bad enough, the sad truth is, the Watchtower’s policies for elders on how to handle accusations of child abuse has been a contributing factor in actually protecting pedophiles from exposure, thus recklessly endangering even more children to the depredations of pedophiles. (See republished open letter: A Conspiracy of Silence Soon to End)

Since the Governing Body of Jehovah’s Witnesses and the legal department of the Watchtower institution exert absolute control over what is taught, as well as the policies and procedures governing all matters pertaining to the function of every congregation throughout the earth, ultimately they are responsible for the crimes that have occurred on their watch. Despite their denials, it is inconceivable that the Watchtower is blame-free given the fact that they are responsible for writing the regulations and drafting the decrees that Christian elders are obligated to implement.

Nevertheless, up until this very moment the Watchtower Society has never publicly made any statement of apology or accepted any responsibility whatsoever for the policies it has required elders to enforce. The hypocrisy of their refusal is manifest in the fact that behind closed doors the Watchtower’s lawyers have paid out millions to child abuse victims in order to avoid public exposure in open court.

But public exposure and court scrutiny are really not what the leadership of the Watchtower ought to be concerned with. Ultimately, those put in charge of the master’s house must answer to their master when he returns.

But is it really fair to say that the Watchtower has plundered and taken spoil from widows and orphans? Sadly, yes. There’s more. In recent years as the organization has become more and more prosperous, it has begun wheeling and dealing in real estate and financial matters. While Jehovah’s Witnesses have shown an extraordinary spirit of cooperation and zeal in building kingdom halls —many of which since the ’70s have been constructed in the quick-build program —they did so with the expectation of having a facility located in their community to advance the work of making disciples.

The hardworking brothers and sisters may have known that every kingdom hall and assembly hall, although built and paid for by them, is actually owned by the Watchtower, but it was never a concern. The faithful slave will always do the right thing. However, back in the early 80s there was a change in the corporate structure. It was announced in a little footnote in the Watchtower —no longer would the Governing Body have any control over the business dealings of Watchtower Inc. The GB would only be responsible for spiritual matters. The business end of things was going to be run solely by the nameless, faceless board of directors.

Since then the Watchtower has hatched a variety of money-making schemes, far beyond the traditional donation box arrangement. Now the corporation is going after the big money,  especially targetting elderly JW’s who may possess more than younger people. Bethel exhorts them to sign over insurance policies, annuities, stocks, bonds, bank accounts, and even homes and entire estates.

Most egregious, the Watchtower has closed down hundreds (nearly 1,000) of perfectly suitable kingdom halls, evicting the occupants and selling the properties like common real estate. In many instances, the kingdom halls simply sit empty because they have not sold. No matter, Jehovah’s Witnesses have been forced to disperse and abandon their places of worship. Dispossessed congregants —no doubt many elderly widows included —in some cases are forced to travel great distances to attend meetings, at least when the kingdom halls were all open.

Now, with the ongoing pandemic, every kingdom hall is shuttered. Under these circumstances, it is not out of the question that the greedy thieves running the Watchtower may seize the opportunity and try to sell off every brick and mortar meeting place and go 100% virtual, which, of course, would be the end of Jehovah’s Witnesses as an actual evangelizing organization. But the fact is, if men are willing to impose policies on those under their authority that endanger the welfare of children, they are capable of any evil.

Kingdom halls remain shut even in places where the law does not require houses of worship to be closed. Why? By the decree of the high priests of Bethel, it is far too risky and reckless for Jehovah’s Witnesses to meet together or even venture out onto the street to preach the good news.

Just think, in times past Jehovah’s Witnesses risked their lives to preach during the Nazi Holocaust and behind the Soviet iron curtain. In the United States, the witnesses risked life and limb by preaching in defiance of angry mobs. Missionaries have gone to the most remote places on earth —braving tropical jungles and exposing themselves to strange diseases —sometimes succumbing. Zealous witnesses have always tried to follow the apostolic decree to preach in both favorable and troublesome times.

Now, however, by the decree of the Governing Body, no witness may publicly preach. Even though young healthy adults are not even vulnerable to succumbing to the virus the Watchtower has imposed a regulation that countermands the Lord Jesus Christ.

Woe indeed! Woe to those enacting harmful regulations! Woe to those writing out oppressive decrees that have shoved the afflicted one away from justice! Woe to those who have plundered the widows and sold property solemnly dedicated to God! Yes, woe to the Watchtower Society! Let those devout Bible researchers meditate and ponder the questions Jehovah poses to them: “And what will you men do at the day of being given attention and at the ruin, when it comes from far away? Toward whom will you flee for assistance, and where will you leave your glory, except it be that one must bow down under the prisoners and that people keep falling under those who have been killed? In view of all this his anger has not turned back, but his hand is stretched out still.” — Isaiah 10:3-4