Will Love of Neighbor Move You to Speak?

Will Love of Neighbor Move You to Speak?

What are some ways in which we follow the Golden Rule in our ministry? We treat each householder as an individual. We show respect for the householder’s home and other property. We endeavor to participate in the ministry at times when householders are most likely to be at home and receptive. And we introduce our message in a way that is well-received in the local territory. Many benefits come from treating those in our territory as we would like to be treated. By acting in a kind and considerate manner, we are letting our light shine, are underscoring the value of Scriptural principles, and are giving glory to our heavenly Father. We may attract more people to the truth by the way we approach them. Whether those to whom we preach accept the Kingdom message or not, we have the satisfaction of knowing that we are doing our best to accomplish our ministry.

Jehovah’s Witnesses have work to do. They truly are on a mission to preach the Kingdom and teach as many as are teachable. But time is limited. At some point the worldwide preaching work will come to an end.

The end will come, not because the Watchtower will have determined it has accomplished the work, but because the conditions will suddenly change, making it impossible for Jehovah’s Witnesses to carry on their ministry as before. The sudden and unexpected loss of the harvest is what the opening chapter of the Hebrew prophecy of Joel is all about. 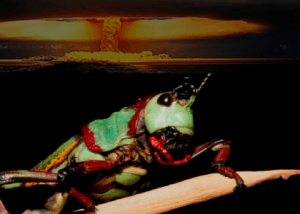 This unexpected development will come as quite a jolt. The reason being, although Jehovah’s Witnesses have always been in expectation of the end of the present system, their expectations are based upon the way the Watchtower has laid it out. The great tribulation begins when Babylon the Great is destroyed. That is what is supposed to happen next.

However, what if events do not unfold in the way the Watchtower has repeatedly stated?  No doubt it will cause many of Jehovah’s Witnesses to stumble and give way to doubt and uncertainty. Jesus foretold this very thing, when he said: “Then, too, many will be stumbled and will betray one another and will hate one another.”

Make no mistake, those who will be stumbled and hate one another are those who presently are in the truth, who greet each other as “brother” and “sister.” In Mark’s version of Jesus’ so-called Olivet Discourse, Jesus stated: “Furthermore, brother will deliver brother over to death, and a father a child, and children will rise up against parents and have them put to death.”

Surely, this aspect of the culmination of all things is not in evidence, is it? Is Jesus foretelling that people of the world will turn upon each other? No, of course not. The prophecy relates to Christians turning on each other. This is something that can only happen when societies collapse into totalitarian rule. With the Watchtower out of the picture and the faith banned, Satan will move family members to betray their own kin who are true to their faith.

Having a glimpse of what is to come, how ought that affect your relationship with your brothers and sisters now, assuming that you are associated in a congregation? Well, how might the Golden Rule apply? Would we want to be told if your were unaware of an impending danger? Surely you would. Here is what a Watchtower from yesteryear entitled Can You Be True To God, Yet Hide the Facts? states on the matter:

WHAT results when a lie is let go unchallenged? Does not silence help the lie to pass as truth, to have freer sway to influence many, perhaps to their serious harm?

What happens when misconduct and immorality are allowed to go unexposed and uncondemned? Is this not like covering over an infection without any effort to cure it and keep it from spreading?

When persons are in great danger from a source that they do not suspect or are being misled by those they consider their friends, is it an unkindness to warn them? They may prefer not to believe the warning. They may even resent it. But does that free one from the moral responsibility to give that warning?

If you are among those seeking to be faithful to God, the issues these questions raise are vital for you today. Why? Because God’s servants in every period of history have had to face up to the challenge these issues present. They have had to expose falsehood and wrongdoing and warn people of dangers and deception—not just in a general way, but in a specific way, in the interest of pure worship. It would have been far easier to keep silent or say only what people wanted to hear. But faithfulness to God and love of neighbor moved them to speak. They realized that “better is a revealed reproof than a concealed love.” — Wt. January 15, 1974

The challenges that will confront Jehovah’s Witnesses in the near future will be unlike anything you have ever faced. It would be far easier for you to keep silent now and just let what is going to happen, happen. True, many JW’s will not want to believe it. They will likely even resent your implying the Watchtower is wrong. You could even wind up facing a judicial committee. But love for our neighbor ought to move us to speak. In time they may even thank you.

On a practical note: Perhaps in a non-confrontational manner simply bring up a discussion on the book of Joel and point out some of the incongruities that Jehovah’s Witnesses accept. (Tip: Don’t use words like absurd, nonsense, ridiculous or preposterous when discussing the WT’s teaching.)

One of Jehovah’s Witnesses recently informed me that she has had some success by simply bring up a topic as if it is something she has been thinking about. She has found that others were interested and quick to agree.

Another suggestion, why not write a letter to your local branch or Brooklyn Bethel? Ask them to explain something that you already know the answer to. Perhaps you might get someone at Bethel thinking. Of course, they probably will not answer you directly, but they will forward your letter to your congregation elders and have them deal with you. By that backdoor method, though, you can then engage your local elders and point out the fact that the WT has no answer. Elders are people too, you know.And sometimes they can be very reasonable.