Who is the false prophet of Revelation?

Who is the false prophet of Revelation?

QUESTION: Who is ‘the false prophet?” And why is he called such?

According to the Watchtower the false prophet is the same as the two-horned beast that begins speaking as a dragon. This is a useful interpretation to the extent that the idea has at least been introduced that the false prophet is not a religious entity or person, such as a pope, which is how the evangelicals interpret it.

Be that as it may, the Watchtower’s interpretation is irrelevant due to the simple fact that the Lord’s day has not begun. Consequently, everything the Watchtower has put forward as the outworking of prophecy is false.

To the point, the seven-headed beast has not suffered a fatal wound to one of its seven hoary heads. Nor has the two-horned, lamblike beast emerged from the earth and begun speaking as a dragon and commanded that an image of the beast be made. Nor has the image of the beast come to life and caused to be killed those who refuse to worship it. And most certainly, people of the world have not been marked with the indelible 666 mark of doom since 1922 for worshipping the now non-existent League of Nations. And lastly, the false prophet has not come on the scene as a demonic oracle. These things are what must shortly take place, initiated by the coming of the Lord of heaven and earth.

A question that ought to be asked is this: Since the demons are the rulers of this world and have been since the great flood, why would they lead the kings under their influence into a direct conflict with Almighty God knowing the disastrous outcome? The answer is found in the preceding verse —Revelation 16:12, which reads: “The sixth one poured out his bowl on the great river Euphrates, and its water was dried up to prepare the way for the kings from the rising of the sun.”

The mighty citadel of Babylon was located along the great river, Euphrates. Isaiah the prophet foretold that Jehovah would dry up the Euphrates in order that his anointed one, King Cyrus, might capture the impregnable fortress. That actually happened. On October, 2nd, 539 BCE, the Medes and Persians engineered the amazing feat of temporarily lowering the water level, perhaps by stealthily opening floodgates along the river to divert the water into detention ponds, whatever, whereby the armies of Cyrus waded across and walked through the opened gates facing the river, while the king and his grandees toasted their gods with Jehovah’s golden chalices.

The overthrow of Babylon stunned the ancient world. More importantly, it serves as a portent for the complete overthrow of Satan’s dominion.

Interestingly, it is reports from out of the east and north (Jehovah himself comes out of the north) that so greatly disturb the king of the north that he goes into a genocidal rage —not unlike Herod who received reports from the magi from the east regarding the birth of the promised king, and proceeded to slay every babe in the region.

So, the demons will be forced to enter into conflict with God Almighty due to the rise to power of the kings of the King himself —Jesus Christ. In other words, Christ forces the issue by asserting his own Kingdom. Needless to say, the false prophet is opposed to Christ.

As regards the drying up of the waters of the Euphrates this must symbolize the destruction of Babylon the Great, which precedes the final war at Armageddon. That means the false prophet cannot be a religious figure associated with Christendom.

Now, as to the identity of the yet-to-come-on-the-scene false prophet, it is well to take note of the interaction of the two-horned beast and the image it creates. While the two-horned beast is said to perform great signs to empower the image, such as conjuring fire from heaven, the image itself is said to come alive and begin to speak. So, it is no lifeless image. And the 19th chapter of Revelation indicates that the false prophet also performs great, deceptive signs.

The 13th chapter of Revelation depicts the revived seven-headed beast as speaking great blasphemies against God and even those who reside in heaven. Likewise, the prophecy in the seventh chapter of Daniel portrays the beast sprouting an 11th horn that has eyes and a mouth that speaks grandiose things. The commonality, both beasts speak against God.

Similarly, the king of the north is said to “exalt himself and magnify himself above every god; and against the God of gods he will speak astonishing things. And he will prove successful until the denunciation comes to a finish; because what is determined must take place. He will show no regard for the God of his fathers; nor will he show regard for the desire of women or for any other god, but he will magnify himself over everyone.”

All of these prophetic snapshots picture the same thing —the last kingdom that stands in direct opposition to the incoming Kingdom of Christ.

Take note that the king of the north not only speaks shocking things against the God of gods, but he shows no regard for the god of his fathers, which is to say the God associated with the Bible and Christianity, which all the previous manifestations of the king of the north honored —at least superficially. For example, the official religion of the British Empire is the Anglican Church.

During the time of the end the king of the north rejects all religious gods. Instead he gives honor to the god of fortresses, along with a foreign god. Who is the foreign god? It is undoubtedly Satan the Devil, who up until the time of the end is kept in the background and made to appear to have little influence over worldly affairs. Satan’s coming to the fore is evident by reason of the fact that the soft-spoken two-horned lamb begins speaking as a dragon when it orders the fabrication of the image.

There is unquestionably a conspiracy to destroy Christianity and all traces of the God who inspired the Bible. Back during the so-called Dark Ages Satan had nearly succeeded in snuffing out the light from the Holy Scriptures. But the Renaissance brought civilization out from the backwardness and superstition that the empire and the apostate church had imposed. The establishment of America as an free and independent republic not only ushered in an age of progress, but facilitated Christ’s work of bringing in the final sons of the Kingdom.

It is the king of the north who is determined to overthrow America and republicanism, undo the Renaissance and reestablish the feudal system devoid of church and state and any trace of the God of the Bible. To that end the agents of the empire have been hard at work over the past century setting up various institutions like the League of Nations, the United Nations and the more recent European Union, for the express purpose of undermining and subverting national sovereignty. Behind it all is the secret society of Freemasonry.

As an indication of the influence of masonry consider the familiar UN logo. The earth is mapped out flat on a grid surrounded by two olive branches. Count the number of squares in the grid and it comes to 32. Including the center eye it is 33. And not coincidently 33 is the highest level of masonry, which is also apparently intended to represent half of 666. The map with its center eye is the eye of Horus that peers down from on high in the UN General Assembly. The masonic eye and pyramid are also prominent at the Hague. (See video below) 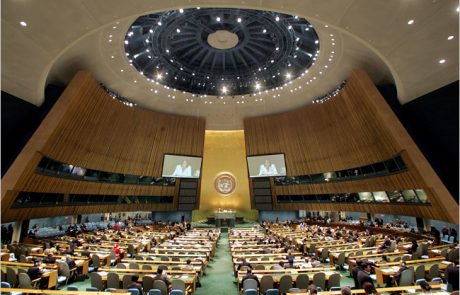 As incredible and ridiculous as it is, the fact that there is a flat earth movement underway to convince people the earth is not a sphere is an expression of the goal of the Illuminati to destroy the Renaissance and to reimpose the sort of ignorance that once prevailed before the historic Columbus expedition totally discredited the anti-science, flat earthers of his day.

The anti-Renaissance, magic-oriented mind of the masons is reflected in the flat earth UN logo. Amazingly, a growing number of people actually believe that the Masons have secret knowledge that the earth is really flat!

(Interestingly, besides the masonic eye of Horus assembly hall in Denmark, the Masons have apparently, cleverly emblazoned their insignia on the architecture of Wallkill in the form of the interlocking 3’s that form the dormitory building –apparently intended to signal 33. Masons, after all, consider themselves to be “builders.” Click here and select satellite view and rotate 90 degrees.)

While the Freemasons may be thought of as an innocuous fraternity, the upper level of initiates are Luciferians, devotees of the Devil. (See Secret Society of Lucifer) They consider themselves to be the light bearers. When the conspiracy to destroy the present nation-state system comes to fruition, then the behind-the-scenes god will come to the fore. And his spokesman will be the false prophet —undoubtedly embodied in a revived United Nations, which will come alive and be made to speak; through which, the frog-like croakings of the demons will be channeled through the high priest of the masonic cult.

Quite likely the false prophet will intend to speak as God by having eliminated all religious organizations and dispatching the earthly sons of the Kingdom —thereby, silencing the voice of the brothers of Christ, the two witnesses. Indeed, prior to the mention of the false prophet the scripture says: “The third one (angel) poured out his bowl into the rivers and the springs of water. And they became blood. I heard the angel over the waters say: ‘You, the One who is and who was, the loyal One, are righteous, for you have issued these judgments, because they poured out the blood of holy ones and of prophets, and you have given them blood to drink; they deserve it.”’

From the beginning of the revival of the truth back in the early days of the Watchtower Satan has sought to insert a false dawning of Christ, which has been wildly successful, evidenced in the core doctrine of the Watchtower —the invisible presence of Christ. The expressions golden age, golden dawn, millennial dawn, common in the beginning, are evidently drawn from masonry.