Whenever they say “peace and security” – Then what?

Whenever they say “peace and security” – Then what?

QUESTION: We have read all your “peace and security” articles and someone already posed the question if it is possible that the declaration of peace and security might come after the world war and you said ‘no that is not possible’, but then on another article someone asked you in the comments and you said you weren’t dogmatic. Might it be possible that a very limited nuclear strike could happen and then suddenly countries would push for peace before an all-out war? Can you help clarify this for us?

ANSWER: The one updated article on peace and security from nearly two years ago presents my reasoning on the topic. Here is a little more to consider.

It is always good to examine biblical passages in their context and not in isolation. To do that we must go to the preceding chapter four of 1st Thessalonians. Paul was writing to the Thessalonians regarding their shared hope of being resurrected to join Christ in heaven. Specifically, Paul brought up the subject of the presence of Christ. Verses 15-18 read: “For this is what we tell you by Jehovah’s word, that we the living who survive to the presence of the Lord will in no way precede those who have fallen asleep in death; because the Lord himself will descend from heaven with a commanding call, with an archangel’s voice and with God’s trumpet, and those who are dead in union with Christ will rise first. Afterward we the living who are surviving will, together with them, be caught away in clouds to meet the Lord in the air; and thus we will always be with the Lord. So keep comforting one another with these words.”

The very next span of verses states the following: “Now as for the times and the seasons, brothers, you need nothing to be written to you. For you yourselves know very well that Jehovah’s day is coming exactly as a thief in the night. Whenever it is that they are saying, “Peace and security!” then sudden destruction is to be instantly on them, just like birth pains on a pregnant woman, and they will by no means escape.”

We realize, of course, that the Bible was not originally divided into chapters and verses. Obviously, in Paul’s original letter to the Thessalonians there was no division between the last verse of the fourth chapter and the first verse of the fifth chapter. So, it should be apparent that the “times and seasons” Paul was referring to have to do with the return of Christ, when he descends from heaven to wake the dead, at least those who died in union with him.

As you all surely know, the Watchtower requires Jehovah’s Witnesses to believe that the parousia of Christ, the presence, began in 1914. And in order to harmonize what Paul wrote above with that belief the Watchtower claims that the first resurrection commenced in 1918.

Although softening their dogmatic assertion from previous years an article published in 2007, entitled: The First Resurrection – Now Underway! states:

Although the Watchtower has unwittingly hit on the sacred secret regarding the duration of the parousia itself — that it is patterned after Christ’s 42 month earthly ministry — that is a topic for another article. (Regarding Times and Seasons) The point is, Paul clearly indicated that their “saying ‘peace and security’” is an immediate precursor of the parousia and the start of the first resurrection — not the tribulation or Armageddon, as is commonly assumed. That being the case, if Christ’s presence has already begun ought they not have been saying “peace and security” prior to the outbreak of the First World War in August of 1914.

But why did Paul say that “sudden destruction is to be instantly upon them”? Is that not indicative of the destruction to come at the place called “Armageddon”?

Do not Jehovah’s Witnesses believe that the beginning of the rule of God’s Kingdom initiates the casting down of Satan and his angels, which results in a time of great woe for the world, manifested in the physical realm by nations and kingdoms rising against each other in warfare?

And does not the Watchtower teach that as a result of the demons being cast down and the war they foment, the ruling head of the wild beast will receive what Revelation describes as a fatal wound?

That mortal wound is in all probability the fulfillment of what Paul foretold regarding “sudden destruction.” And it is likely that the “they” who will be saying “peace and security” are the politicians associated with the Anglo-American beast.

Although the beast is destined to momentarily recover from the death blow, “they will by no means escape” Jehovah’s adverse judgment. That is because everyone who rejoices over the short-lived resuscitation of the head of the beast or who hails the image of the beast as their savior will have their names blotted out of the book of life. And the beast itself will shortly thereafter be hurled into the lake of fire.

It is noteworthy that the big nuclear powers have pushed each other to the point of open hostilities in Ukraine, Syria and the South China Sea. Might there be some sort of “limited” nuclear exchange in those arenas?

And the answer is, yes, it is possible. Most anything is possible. But in my opinion it is not likely. It would be very hard to keep a nuclear war “limited.” The only scenario whereby a nuclear catastrophe could be limited is if it is detonated by terrorists. But a confrontation between America and Russia would not be limited. No doubt the reason why Jesus said God would be compelled to intervene to cut short the tribulation is because once the first nuclear missile flies there is no limiting the madness. 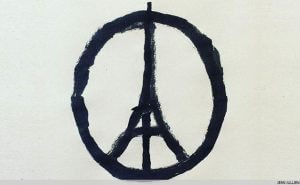 Ironically one day after the Friday the 13th massacre in Paris representatives from 19 nations held a previously scheduled meeting in Vienna to discuss moving the peace talks forward to end the war in Syria. Included among the negotiators was United Nations’ General Secretary, Ban Ki-moon, who urged all the parties involved to resolve their differences. In a separate communique published on the UN’s website, Ban Ki-moon stated that there now exists a “rare moment of diplomatic opportunity to end conflict in Syria.”

As if to symbolize the sudden, renewed peace initiative, the Eiffel Tower has become the new peace logo and has “gone viral,” as they say. Indeed, the nations of Europe have an added incentive to find a solution, not just because of the threat of more massacres, but because they are being inundated by a flood of refugees who are fleeing Syria and other Middle East countries devastated by years of war and revolution. And evidently Islamic radicals are posing as refugees in order to gain access to the soft targets in the heart of Europe. So, stemming the flow of refugees is paramount for the peace and security of Europe and is under discussion by the G20

In a statement from Vienna The Christian Science Monitor quotes the American Secretary of State as saying:

[Syria] conflict,” adding the attacks “have encouraged us today to do even harder work to make progress and to help resolve the crises we face.”

According to Fox News the world leaders agreed to begin talks for a transition government in Syria beginning on the first day of the new year, 2016.

Will the upcoming talks result in their finally giving voice to the long-anticipated “peace and security” in fulfillment of the prophecy? No way to know in advance. However, the times and seasons must be near. Not only is Bethel ripe with ferment, the present global situation is primed for a catastrophe of immense proportions “whenever it is that they are saying, ‘Peace and security!’”