When Is the Temple Inspection?

When Is the Temple Inspection?

Is it futile to search for God? No, for he wants us to find him. The apostle Paul made that clear when he gave a witness to a group assembled on the Areopagus. That took place within sight of the Parthenon—a temple dedicated to Athena, the patron goddess of ancient Athens. Imagine that you are there as Paul speaks about “the God who made the world and all the things in it” and then explains that He “does not dwell in handmade temples.” The apostle adds that God “made out of one man every nation of men to dwell on the entire surface of the earth, and he decreed the appointed times and the set limits of where men would dwell, so that they would seek God, if they might grope for him and really find him, although, in fact, he is not far off from each one of us.”  Yes, people can find God. Over seven and a half million Witnesses of Jehovah ‘really have found him’—and they truly love him.

Our finding God is only part of the process. The most important question, especially at this point in time, is how will we be found by God? Or, as the apostle phrased it: “Beloved ones, since you are awaiting these things, do your utmost to be found finally by him spotless and unblemished and in peace.”

Our being found by him means that there is a future inspection —an examination of all those who claim to have found God and who claim to love him. 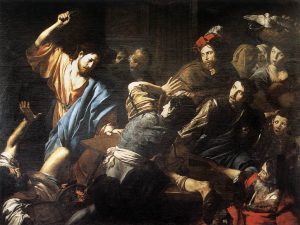 According to the Watchtower, though, Christ came to inspect the the figurative temple back in 1914. The organization supposedly passed the test and that was that. It is all part of the glorious theocratic history. However, Peter also wrote in his first letter of the inspection, indicating that it is to occur at the finale: “Maintain your conduct fine among the nations, so that when they accuse you of being wrongdoers, they may be eyewitnesses of your fine works and, as a result, glorify God in the day of his inspection.”

For a fact, the day of his inspection has not occurred. But because Jehovah’s Witnesses have allowed themselves to be deluded into imagining that it has, it is apparent that they have followed the pattern of the Jews in the time of Christ who failed to discern the time of their being inspected.