When he is made manifest…

When he is made manifest…

Only those who have the witness of the spirit that they are God’s children should partake of the Memorial emblems. Those who have received “a spirit of adoption as sons” are God’s spirit-begotten children. His spirit bears witness with their spirit, giving them the realization that they are Jehovah’s anointed sons. Today, there is only a remnant of the 144,000 footstep followers of Christ, who “have an anointing from the holy one,” Jehovah. It is by means of his spirit that they cry out,“Abba, Father!” What a blessed relationship they have with God!

At some point in the not too distant future there will be a last Memorial of Jesus’ death. Paul indicated as much when he was giving instructions to the Corinthian congregation on how to observe the occasion and he added:  “For whenever you eat this loaf and drink this cup, you keep proclaiming the death of the Lord, until he comes.”

Can you imagine what it would have been like to be one of Jesus’ apostles or the many women you ministered to Christ? They were with him on many occasions, such as when he expelled demons and cured people of terrible diseases and blindness. And they marveled at his wisdom and his power of presence and his speaking with authority as someone who knew their God, Jehovah. They were often stunned and shocked when he spoke against the prevailing Jewish religious establishment. And they were heartbroken when he was betrayed, tortured and executed. Their grief was soon dispelled by rapture when the resurrected Jesus revealed himself to them and shortly after poured out the anointing spirit upon them.

We today are in a situation similar to those original disciples before Christ died and was resurrected. True, unlike the befuddled apostles before his death, we accept his death and resurrection as a basic truth. And we have the anointing. However, we are laboring under a massive delusion that the presence of Christ has already occurred. My life’s work has been to point out the error of 1914 and point to a future, glorious, visible parousia, followed by the revealing of the sons of God. 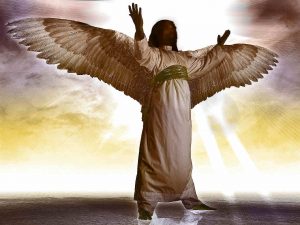 Think of it, Jesus Christ is going to walk among us and come alongside his brothers and manifest himself to them in his glory. Although those of faith who are not anointed will not see Christ in the same way, they will surely be aware of the phenomenon when the chosen ones shine as brightly as the sun in the Kingdom of the Father.

Writing to his fellow anointed, the apostle John said: “See what sort of love the Father has given us, that we should be called children of God! And that is what we are. That is why the world does not know us, because it has not come to know him. Beloved ones, we are now children of God, but it has not yet been made manifest what we will be. We do know that when he is made manifest we will be like him, because we will see him just as he is. And everyone who has this hope in him purifies himself, just as that one is pure.”

This may well be the last observance of Jesus’ death before he comes and reveals himself.