This Christmas week the Watchtower study article for the week is entitled Hold Fast to the Truth With Strong Conviction. What follows are my comments on select paragraphs.

1) THERE may be tens of thousands of so-called Christian denominations that claim to worship God acceptably. No wonder many people are confused! They ask, “Is there one true religion, or do all religions please God?” Are we strongly convinced in our own mind that what we are teaching is the truth and that the pattern of worship that Jehovah’s Witnesses are following today is the one that is acceptable to Jehovah? Is it really possible to have such conviction? Let us consider the evidence.

2) The apostle Paul was strongly convinced of the truth. (Read 1 Thessalonians 1:5.) That conviction was not based on emotion. Paul was a diligent student of God’s Word. He believed that “all Scripture is inspired of God.” (2 Tim. 3:16) What did his studies reveal? In the Scriptures, Paul found undeniable proof that Jesus was the promised Messiah —evidence that the Jewish religious leaders chose to ignore. Those religious hypocrites claimed to represent God but denied him by their works. (Titus 1:16) Unlike them, Paul did not pick and choose which parts of God’s Word he would believe. He was ready to teach and apply “all the counsel of God.” —Acts 20:27.

Paul had good reason to be convinced. Jesus appeared to him in a blinding flash. After Christ appeared to him Paul did not immediately begin preaching nor did he confer with other Christians. Instead, he went off into the wilderness of Arabia for many years. No doubt he studied the Hebrew Scriptures and received revelations by means of the holy spirit. When Paul emerged he possessed greater comprehension of the sacred secrets than all the other prominent men. I wish the teachers of the teachers could spend some time in the wilderness meditating on God’s word.

3) Some feel that the true religion should be able to answer every question, even questions that are not specifically addressed in the Bible. Is that a realistic expectation? Consider Paul’s example. He encouraged fellow believers to “make sure of all things,” but he also admitted that there were many things he did not understand. (1 Thess. 5:21) “We have partial knowledge,” he wrote, adding, “we see in hazy outline by means of a metal mirror.” (1 Cor. 13:9, 12) Paul did not understand everything; nor do we. But Paul did see the general outline of Jehovah’s purposes. He knew enough to be convinced that he had the truth!

In context, Paul wrote: “For we have partial knowledge and we prophesy partially, but when what is complete comes, what is partial will be done away with. When I was a child, I used to speak as a child, to think as a child, to reason as a child; but now that I have become a man, I have done away with the traits of a child. For now we see in hazy outline by means of a metal mirror, but then it will be face-to-face. At present I know partially, but then I will know accurately, just as I am accurately known.”

By the Watchtower’s own admission we have partial knowledge. When is the partial done away with? When that which is complete comes. When is that? What did Paul mean by “complete”? That which is complete has to do with the Kingdom and the return of Christ. The 10th chapter of Revelation refers to the completion of Christianity, saying: “There will be no delay any longer. But in the days when the seventh angel is about to blow his trumpet, the sacred secret that God declared as good news to his own slaves the prophets is indeed brought to a finish.”

The Watchtower claims that the delay ended in 1914. It is claimed that the sacred secret was brought to a finish over a century ago. But how could the good news have been brought to a finish back when the Watchtower was just launching the most extensive preaching campaign in history? Obviously, that is childish reasoning and simply cannot be true.

It is not wise to brag about being firmly convinced of something that is a lie. Shouldn’t the practicers of the true religion at least be willing and able to address these sorts of contradictions in an honest and open way?

7) Today many follow charismatic church leaders. Enthusiasm for such men sometimes borders on idolatry. People pack their churches, buy their books, and donate heavily to the causes these leaders promote. Some individuals hang on to their every word. It is hard to imagine that these churchgoers could be more excited if Jesus himself were to appear to them! In contrast, true worshippers of Jehovah have no clergy. Although we respect those who are taking the lead, we accept Jesus’ clear teaching: “All of you are brothers.” (Matt. 23:8-10) We do not idolize men, whether they are religious leaders or political rulers. And we do not support their causes. Rather, we remain neutral and separate from the world. In these areas, we stand out as different from the many groups of professed Christians. —John 18:36.

Perhaps 80 years ago, even as recently as 50 years ago, the statement above was true—or closer to the truth. Now, though, it is a deceitful lie. It is true, the Watchtower does not have any charismatic leaders. Too bad. They could use a few. Instead of an individual, the institution of the Governing Body has been placed on high. They are the spokesmen—Heaven’s earthly mouthpiece.

Idolatry can be very subtle. For Jehovah’s Witnesses, the organization is the golden calf and the Governing Body are the anointed priests who officiate at its altar.

If you are honest you will admit that elders and circuit overseers who give talks constantly praise the Governing Body as the “faithful and discreet slave.” Maybe you are not attuned to it. But just listen more intently and you will realize that Jehovah’s Witnesses place undue importance on the Governing Body. Paul once reproved the Corinthians who were placing undue importance on the apostles. Has the Watchtower ever cautioned Jehovah’s Witnesses about lavishing excessive praise upon the Governing Body? Never! And woe to the one who questions them. To question the Slave in even the slightest degree is tantamount to blasphemy. Jehovah’s Witnesses hang on their every utterance as if they were the Christ. And they dare ridicule the clergy? What brazen hypocrisy! 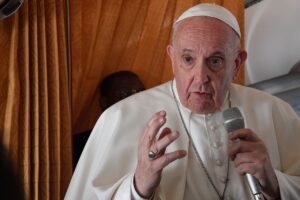 The cult of the Governing Body has become painfully clear in this year, 2021. Over the course of recent Governing Body Updates, the Watchtower has slyly mandated vaccinations. David Splane assured the flock that Jehovah knows best about the efficacy of the vaccines and that God has imparted His wisdom to them.

The GB has intimated that they have taken the shots and they claim that 99% of the Bethel family has been vaccinated, knowing that the millions of sheep who hang on their every word will follow their lead and take the injections. In this, the GB is no different than the pope and other clergymen who openly advocate vaccinations. (Clergy spread good news about vaccines)

As far as remaining neutral and separate and not supporting political causes, that is probably the most blatant lie the Governing Body has uttered to date. Universal vaccination is a political cause! It has nothing to do with protecting public health.

The Governing Body has intentionally amplified the terror of the pandemic—regularly announcing the mounting death toll, which, if the truth is told, is in line with the death rate prior to the pandemic. There is no mass death. The Governing Body has refused to use their influence to advise the flock about any sort of treatment other than what is mandated by the United Nations, partnered with the multi-billion dollar Gates Foundation and monster pharmaceutical industry.

By ridiculing the doctors and experts who have warned of the dangers of mRNA as conspiracy theorists coupled with their silence about cheap and effective remedies that can keep one out of the hospital, which have rightly been described as the new “killing fields,” the Watchtower has revealed itself to be in partnership with the globalists whose agenda is to ultimately destroy Western civilization.

End of Part One.