Was Jesus executed on a stake or cross?

Was Jesus executed on a stake or cross?

If Jesus was executed on a torture stake, with both hands together over his head, why does Jn 20:25 say “…Unless I see in his hands the print of the nailS …”, indicating that there was more than one nail used for his hands? 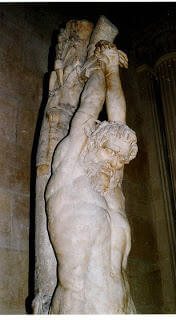 It’s really not a question if Jesus was executed on a stake. The Bible straightforwardly says he was. The confusion comes in because the meaning of the original Greek word has been changed over time. It is generally recognized, though, that the Greek word “stauros” signified a stake or upright pole. Another Greek word -“xylon” – means tree. Here is a Watchtower article that explains these matters.

Common sense dictates that it was a mere upright pole without a crossbeam. It should be noted that the Romans often executed hundreds of people at one time by impaling them. Why go to all the trouble to attach a crossbeam when a single upright stake would serve the purpose? Especially is that relevant when we consider the labor that was involved using the crude tools of that day to cut down a tree large enough to provide two equal length pales, and saw them to the proper length and chisel out a notch on one or both beams in order to attach them – all by hand. It doesn’t make any sense.

The Bible does not say how Jesus was nailed to the beam.  All four gospels simply say that they nailed him to the stake. So it is left to the imagination. Most artist’s depictions illustrate Jesus with one hand upon the other and one nail driven through both hands. Even the Watchtower illustrates Jesus hanging upon a stake with one hand upon the other.

We might assume that there is some biblical basis for this common depiction. But there is not. Again, all four gospels merely state that they took Jesus and they nailed him to a stake. It is entirely plausible, though, that Jesus was nailed to the stake with one hand on one side of the stake and the other hand on the other side, with one nail for each hand.

For those who may not be familiar with the book, The Two Babylons, which was written by Alexander Hislop over 150 years ago, it goes into great detail to reveal the pagan origin of not only the cross, but most of what passes for Christianity. It is not an easy read and Hislop runs off the rails when he delves into prophecy, but it is a fascinating look into the amazing connection the Roman Catholic Church has with mystery Babylon of antiquity.